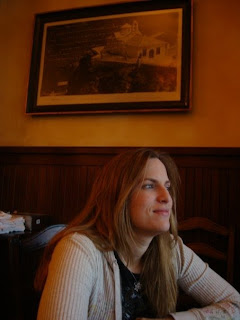 I've heard a lot of mixed reviews about Cat Cora's new eatery in Disney's Boardwalk Resort. My travel companion (Sistah' Girl) is a fan of the Food network and was excited to try it, but after the many negative reviews, I'll admit, I was hesitant. So we compromised and decided to try out an early breakfast - rather than tempt the negative lunch and dinner reviews.

Afterall, we had limited budget and limited calories to play with.

Well, breakfast turned out to be a raging success! Not only was it probably the best meal we had, it also was the best value, we had on property during our entire stay. What a great surprise!

We arrived early, around 8:30am, and were seated immediately. There were only two other groups in the restruant at that time, which was pleasant and a great way to start off a relaxing morning. Since we tour commando style, sit down meals are a life (and feet) saver. The more relaxing they can be, the better.

So we were on a limited diet and budget. That made it VERY difficult to select from the menu! Everything looked amazing, but we knew that we couldn't afford to order everything. So here's what we went with: 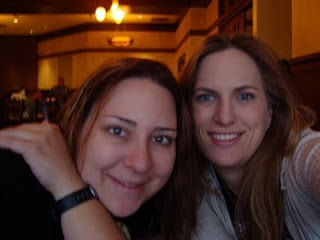 Substitutions -
Sweet Potato Hash instead of Breakfast potatoes on entree

Overall - the meal was great! Our waitress was great, and kept the coffee, hot tea, and water coming. We made it clear we wanted to try several things, but were on a restricted diet and couldn't eat 2 full entrees. We split the one entree and sides. She did charge us an bit extra than normal for the Blueberry Orange Pancakes, but it was completely worth it.

Overall, our breakfast cost us about $25 (excluding tip) but as you can see from the smiles, we left very satisified customers and will definately be back someday to enjoy this one again.

Observations: Guests who eat during peak meal periods may find this to be an unpleasant experience, if they are looking for a relaxing dining experience. As the place filled, it got very very noisy very very quickly. There are no tapestries to speak of and the sound just echos like crazy. Also, we must have arrived as they were recieving or preparing fish for the evening. Though it didn't smell like fish in the restruant, it did in the entry lobby, rather strongly. However, this may not be the norm. I would suggest breakfast though, the earlier the better! Since we were seated immediately, it wasn't bothersome. Also, the bathrooms were surprisingly small for a place this size. But again, all these pitfalls can be avoided by dining off peak hours.
Posted by -J.D. Humenay at 11:07 PM