Fear: Not resolving the "what ifs" of the past in way that helps me leave room for the future.

Gratitude: That my life feels like it's going in the right direction, with all the love and support from those around me.

Inspirational Person of the day: 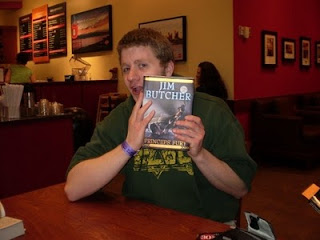 FlyBoy!
I can't discuss people who have had a profound effect on me over the years without mentioning this particular person.

FlyBoy and I have known each other for a very long time, but we've never actually met, face to face. I met FlyBoy under the guise of Ashta - one of the very first freeform online roleplaying characters I developed. When I was a teenager, almost every free moment that wasn't spent in Drama Club or ShowChoir in High School, was spent online, writing. (For those that don't know, online freeform roleplaying is pretty much being in a chat room. Only, instead of being yourself, you are whatever your imagination can come up with. Dwarves, mages, vampires, elves, etc. Ashta is a headstrong, solitary creature that I may blog more about at a later date. But this blog isn't about Ashta - and I could write a book alone just about her.)


As far as we can agree, I was 16 when our characters met, and he was 14. We met first as our characters (Ashta and Lazarus) and later got to know each other OOC (out of character). 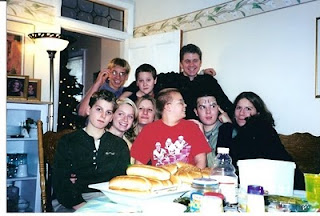 (FlyBoy is in black in the back - I figure this may have been taken near the age we "met".)

So here we are, well over a decade later, and time has proven to me just how much we've both grown and changed. And now I count him among one of the closest people to me, though we've never actually been in the same state.

Growing any type of relationship long distance requires communication skills that, let's face it, most of us are sorely lacking now-a-days. One thing I admire about FlyBoy is that, well, he doesn't seem to have a problem there. He's one of few people I can debate with, and not feel attacked. Even though we disagree on some topics, he treats the subject with the upmost respect and manages to speak with gentle passion on the topics that we may not agree on. Since I'm not big on conflict, this is a STRONG tribute to his communication skills. He's also the type to call just to say hi and talk, rather than expecting Myspace, Facebook, a text do the trick. (Maybe this is unique to my relationship w/ him, as we've never NOT been long distance, but there ya go.) He also understands the "unspoken" communication - like when I need to just be a hermit for a while. Regardless of the situation, a conversation with FlyBoy usually leaves me smiling - if only for the reliefe of someone who speaks my lanuage and understands me - 1/2 way across the country. Afterall, who couldn't use a reminder that they aren't crazy every once in a while? ;)

FlyBoy shares traits some of those dearest to me have. He also gives it to me straight and honestly all the time. He has ambition for his future and knows himself well enough to know where he needs to grow, what he wants to protect, and where he wants to go.

But I'd like to focus on his steadfast spirit (aka stubborness). When he decides on something, I have no doubt he'll accomplish it. His unwaivering beliefe and support for me and my personal goals reminds me of the person I try to be for others. He goes a step beyond being a cheering squad. FlyBoy takes an active role whenever possible. When he heard I was training for a triathlon/marathon, he e-mailed me a guide that he thought could help me get off the coach and complete my goal. When reporting in on my attempts at weight-loss, he was right there, cheering me on - not just reading my blogs when it was convienent, but taking time out of his day/night to call and see how things were going. When I was struggling through the difficult relationship messes in my past, he's been there to listen, advise, or just truly sympathize (and vice versa). 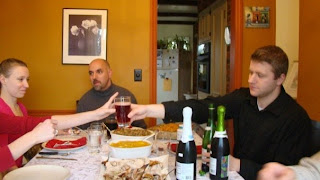 (FlyBoy today, in black on the right)

He's far from a doormat, but his kindness and consideration have left an imprint on my heart - and a challenge to be no less than my best.

Revelation of the Week: While love is a gift, strive to be worthy of it - and you'll never lose it.