The Chance to Do Something Good

Still on the "pause" from the Wedding blogging, because something came up recently that I'm seriously considering.

I have the chance to do something good for women with Endo (like me).

A little minor history - Endometriosis was discovered in 1899. The first classification on it didn't exist until 1917, and the first paper on it wasn't published until 1921.

It's 2012, and we still don't have a cure. In fact, we don't even have a reason for it, or a treatment for it, short of cutting it out (it grows right back in most cases and often times the scar tissue does more damage than the Endo was doing in the first place).

﻿ I was diagnosed with Endometriosis as part of my oopherectomy (ovary removal for all you non-medical folks out there) in July of 2010. Due to a severe (genetic) scarring disorder, removing it would compound the problem exponetially.

Now, I wouldn't say my case is "severe". Endometriosis isn't the kind of thing that easily appears on an ultrasound. Usually it has to be surgically diagnosed and after by diagnosis, my doctor and I opted to avoid other surgeries as much as possible.

Often times, the most painful cases are the least severe. (Weird, huh?) Mine is periodically painful. It's the other gastrointestinal symptoms that are more bothersome to me on a daily basis. When it does hurt, the description of "someone wrapped a ball of barbed wire around my organs" is pretty accurate. Ever tried jogging with a ball of barbed wire in your lower abdomen? Not my idea of fun either.

So where am I going with all of this? Yes, it's more than just a basic run down of Endo.

I recently qualified for an independent study on a drug that is designed to help women with the pain of endometriosis specifically. Usually, Endometriosis patients are religated to the usual list of "pain meds" - Motrin, Tylenol, Ibuprohen, Morphine (in extreme cases), etc. All of which work, sort of, for a while. But usually we end up just grinning and bearing it. (Well, maybe the "grinning" part isn't so true. It's probably more accurate to say we power through it and do our best to keep our cool.)

So that said, I was pretty excited to hear about the study AND that I qualify - even though an endometrial biopsy is required (YOUCH!!!!!).

The study lasts for a year and half, and requires particpants to use 2 kinds of birth control and particpants can't be on the pill. Well, my friend "the pill" and I parted ways a few months ago, so that's okay. My Sailor and I are looking forward to adopting (surprise!) next year (yeah!).  While we're willing to let nature take it's course as well, we know the odds of my body cooperating are very slim. He's yet to be tested, so for all we know, we're just having fun practicing all this baby making stuff. (TMI? Probably - but hey! It is what it is.)

So, while doing this study could really help other women who deal with the same pain, but it could postpone any chance of a bio kid for another year and a half (possibly longer, but that's optional at that point).  I'm sleeping on it at the moment. My Sailor is behind me whatever I choose to do, but I know he'll be disappointed if I opt to do it - not because I'll (hopefully) be in less pain, but because it'll push off/lessen the chance of us getting pregnant. Even afterwards, I'll be older (nearly 34) and that's really kinda pushin' the envelope - an envelope that may not have any sticky left on it as it is.

I can hear all you Endo Sufferers chanting "do it! do it! do it!" at your screens right now. Trust me, it's a serious consideration. And, yes, with Endo that can't be surgically removed (like mine) there is little chance of pregnancy anyway - and we're both big on doing something that really contributes to the world, so it's a thought. The drug they are testing is NOT intended to be a cure and I've been given zero information to make me believe that's what they are aiming for, but if it can provide reliefe, I can't help but think of all the good it can do. (As with any chronic pain, depression is a really common issue. Add to that infertility - and moods tend to get ugly. Taking away the pain won't take away the infertility, but it might help lessen the load. Nothing makes you feel more useless than being in massive pain, grumpy, and infertile - even if you don't want to get pregnant, it still sucks to have options taken away.) 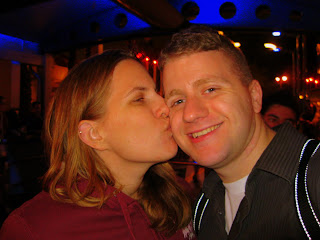 So in all my wedding week re-cappy-ness (which I'll promise I'll return to as life slows down a bit this weekend), I had to take a moment to mark this day with a special blog post.

To My Sailor, My lover,  My Husband, My Friend,

Thank you for standing by me for years.

Thank you for being a good friend when I needed one.

Thank you for being the romance in my life when I needed it.

Thank you for missing me as much as I miss you.

Thank you for taking a chance on me.

Thank you for helping me carve out this amazing  life.

Thank you for sharing this past year with me.

I can't promise it'll be wine and roses,

But I can promise we can start it out that way.

All my love, always and forever - 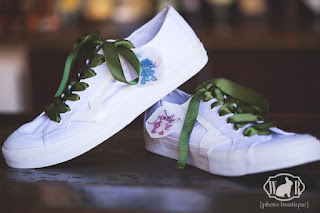 I promise I'll get back to our Sea World day soon. So much has been happening, I've been bursting at the seams trying to keep my trap shut about it. Those folks "in the know" are probably doing the same thing.

We have some big, huge, exciting changes coming our way. Professionally (as My Sailor decides to re-up or not with the Navy and I redouble my efforts to become a full time writer) and otherwise. I'm not going to go into detail here, but I didn't want my readers (ye brave, ye few) to think I'd forgotten about this blog.

Where to start about our travel day? It really started the day before, as we finished packing and last minute crafts for the wedding. On about one hour of sleep, we were up and waiting for the our shuttle to the airport.

And that's where the hiccups began. But what is a big trip like this without a couple of hiccups?

When the shuttle arrived, we were informed that we'd booked the wrong day. We were actually on the list for the day before, and were a "no show". This shuttle was full, so we had to wait for the next one.

An hour of napping in the car at 2am later, and we made it aboard the next shuttle. They were kind enough to let us ride without having to pay again. We arrived at the airport just in time to check our bags and make our flight. We had decided to buy a few of the bigger things while in California - like Sean's suit for the wedding, the frame for our signature frame/guestbook, and a few other odds and ends. My mom was keeping my dress safe and sound in CA.

I have to say Virgin is my new favorite airline. At first, I was reluctant. After all, what does a producing company know about flying? While I'm sure their artists are very familiar with some high flying that doesn't involve airplanes, I doubted their ability to run an awesome airline. But in this case, the price was right, so I booked. I used Expedia to book, but went through Ebates, so I got Expedia reward points, and a few bucks back from Ebates on top of the already discounted price. Not bad. I figured I could suffer through a few hours on even a bad plane for the right price.

In this case, there was nothing "bad" about the plane!  Their seats were comfortable and came complete w/ a great free mix of music and movies to help pass the time. And they treat military REALLY well - like 10 bags free checked well!
However, they did manage to misplace one of our bags. It just happened to be our 1 bag that had our wedding goodies safely tucked away too (including fans for the bridesmaids, my bridal fan, my rehearsal outfit, the girls' wraps, our love letter box, and the flower girl's Mickey). After filing a report, Virgin went looking for it. While we were picked up by my dad and whisked off to lunch at Point Loma Seafood.  It was a great quick stop before we headed into my hometown for the night.

I jumped into a Zumba class before joining my parents for dinner at the house, just the 4 of us. It was really nice to relax and get to know each other. There was some mix up in getting our bag back to us. We knew they found it. At first, they called saying they'd drop it off between 6pm and 8pm. Perfect for us to head to bed early. Then it was by 10pm... after that, people stopped answering the phone as I left messages every hour asking for a status update. Around 2am, we gave up waiting and went to bed. The next day, they called back, apologized and said they'd drop off the bag between 9am and 11am. It arrived (safe and sound) at 10:45am. Whew! At least we got it - and everything was in one peice, but I'll be writing them a letter to let them know that this part of our experience was FAR less than pleasurable.

After that, we used our military free day and headed into Sea World!
Posted by -J.D. Humenay at 4:25 PM No comments: