I will admit, I'm going through a bit of a panic. I'm not really losing my head completely, but there is usual, "OMG, I'm almost 1/3rd of the way through my life and I'm not where I'd like to be yet! Is it ever gonna happen?" It's a bit of a challenging time, but I'm sure I'll come out just fine on the other end.

So I was thinking of how to work this into a blogging challenge.

And I think I figured it out.

Each day, I'll try to blog about someone inspirational in my life, as well as a fear I have (if I even have 30 of them) and something I'm grateful for (I know I'll have more than 30 of those)!

I think there is a definate difference between a woman turning 30 and a man turning 30. Sure, both genders have things we want to accomplish in our lives, but men can have childeren will into their later years. Women have a bit more of a time clock on such things and let me tell you -it's not just a quiet "tick tick tick", like I once thought. I once thought it was completely psychological, but now I know better. It's a very real screeching interal alarm clock.

Fear: In my case, the alarm clock probably has to do with being surrounded by men and women with families, and a number of my co-workers are happily baby-baking at the office. I'm not one to linger in self-pity for long, but sometimes I wonder "what if". Since I'm an aging PCOS patient, my chances of the natural way are pretty much nill as I round into the 30's, but...

Gratitude:I'm eternally grateful of having adoption been put on my heart some time ago. Truly realizing what makes up a "family" has nothing to do with bloodlines is something I'm deeply grateful for. When I think if my family I think immediately of the people who chose to take me in and love me and who continue to help me every day. There is no way I could repay them for all the years of help, nurturing, love, and guidance. And the thought of being able to someday give that back to someone is staggeringly beautiful. It's something I've craved for years now. While I plan on enjoying my time as a single gal, I look foward to settling in with a partner who is as invested in that vision of a family as I am.

Inspirational person of the day: 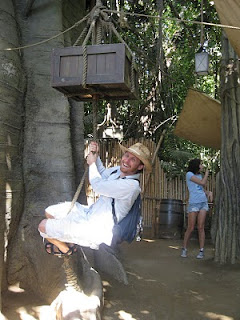 If you asked me to describe him in one word, it would be hands down "quirky".

I met him in 2006. He was my dance partner in a local community theater production of Guys and Dolls. He put up wonderfully with my two left feet (which have since gained some sense of how to dance but it's been a slow process) and was very kind to me. He said I was one of his first platonic friends in the area, and I do consider him like family.

Let me go into his quirkiness a bit. He's a vegatarian, and, at last check, drove a beat up old Mercedes. And I mean beat up. If it rained, his seats were wet. He converted it to run partially on frying oil. He patched that car up more times than I can count just in the 2 years I've known him, but he's never been against a little elbow grease. He's the guy that brings the vegatarian dish to the party and still manages to be the life of it at times.

He's been inspirational to me in that he dares to be different and really get out there and live life. He has a hunger for life and does everything he can to feed that hunger. He's not afraid to adopt into his life causes he believes in, but does it in such a manner that it seems completely natural.

He pushed my limits and encouraged me to get out of the house and off my butt. Together we did a little mountain biking, hiked trails. He has a great way about him of finding new, fun things to do, and I found it a reliefe (as I'm usually the "social director" when it comes to my friends). He's very community oriented and never boring. He's always willing to try something new and rarely complains.

He seems to have a great grasp on what's really important in life. Something about his gentle manner has always been a quiet cattle prod for me. He's a great combination of an adventurer's spirit with a heart of gold. He's one of those friends who, while he's never said it, I know I can call for whatever and if he can, he'll be there. Hell, once he helped me with a bunch of yard work for the reward of pizza and beer! It's a comfort to know he's on my side.

Even though he's moved away, I still smile when I think of our friendship and miss him like a brother.