It's a little hard to believe I turned 32 this year, but I like to think I rang in my 32nd year in style - even if we had a few hiccups.

My Sailor had a duty day the night before (which involves working from about 2pm until about 3am - Yes, that's not a type. 3am) so even though we intended to get up early and make the most of the day, we didn't check into Shari's for birthday breakfast until around noon. Oh well! It was delicious.

My original plan was to head to Seattle, but after such a late start, we opted to stay closer to home and hang out at the Tukwilla Mall. Now, hanging out at a mall may not seem like the birthday wish of anyone over the age 15, however, it's about an hour to the nearest large mall, and this one is HUGE! Great for walking and browsing, and I had an order that came into the bridal store there, so I got to complete a fun errand too.

First off, sleep deprivation is not a pretty thing. We were both a bit crabby and my crabbiness had started the night before. But when all was said and done, we ended up making a great day out of "Plan B".

We picked up the fabric goodies first, and I chatted with Sistah' Girl (LONG overdue) - 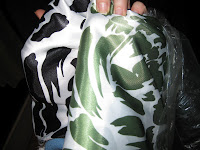 Then headed to the mall. After a few hours of browsing around, we got some goodies at the game shop (My Sailor got some Magic cards and I got 2 new expansion sets to my Zombies!!! Game. Click here for our game night review of it. Obviously , it was a hit!). And we stopped at a funny hat shop too - And then we checked out a Thai place I've always wanted to try! See, in California, I used to walk to a local, delicious Thai eatery fairly often. Usually a couple times/month. So I developed a taste for the unique blend of spices found in that food. It's a different type of "heat" over Japanese, Mexican, and Italian foods. 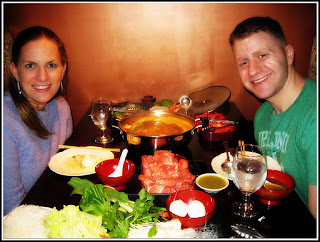 It was fun and delicious - and not too high on the calorie count either! We used Tom Yum soup for it (my favorite) and tried just about everything they offered us. 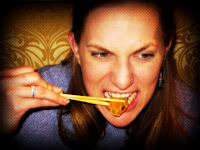 It was a great experiment in dining that I can't wait to repeat someday soon (though I don't think I'll ever eat a mussel again... still don't like 'em, but at least I tried)!

We capped off the night with drinks and dessert at the Cheesecake Factory! It's my first visit there, and it was a hit as well - the perfect way to cap off the evening. (And I know Sistah' Girl would be proud.)
Posted by -J.D. Humenay at 1:41 AM