When everything goes right... 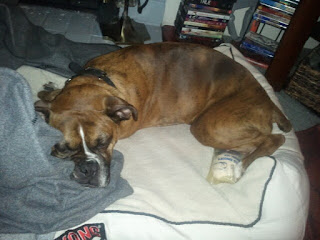 Sometimes, even when the sky is cloudy, there seems to be a beam of sun light shining right on you.

Today, I realized that everything really has fallen into place. Even when things seem like they SHOULD be at their worst, they aren't.


My Sailor got off work surprisingly early yesterday, just in time to help me lift Clydas from the vet's office to the car and into the apartment. We were able to work out the finances of it. True, Clydas was up and down all night. In fact, he whined so much last night that I doubted his pain meds (strong stuff, morphine and Tramadol) were working. Remember, this animal NEVER complains EVER. So for him to be consistently whining is a HUGE thing. Yes, he kept me up all night, but really, can ya blame him? He just had 1/2 his foot amputated.

Even though this has been tough, it's been heartening as well. Clydas is growing stronger every day and I'm reminded what it's like caring for a child. In so many ways, Clydas is just that right now (only a diaper would be more easier than near constant potty walks outside, but they are probably good for his rehab).
It's day 2 and he's figured out how to move around on 3 legs pretty well. He's not ready to put weight on his foot, but I certainly don't blame him for that. He still falls over and a short walk is exhausting for him, but he's a real champ and is proving that my faith in his quick recovery is not misplaced. Though I can tell he's bruised and uncomfortable, he's already adapting so well. We just slow down and go at his pace. Another reason why he's the perfect dog for me - patience is one of my strong suits (most of the time).

We'll still need A LOT of support for the next couple weeks. Monday he goes in for a wound check, and I know it'll all become more "real" to me when I actually see the new shape of his foot. He should be getting a smaller bandage at that point. In about 9-13 days, he'll be getting his stitches out.

In the middle of this whole mess is My Sailor's deployment sneaking up on us faster and faster every day. I'm faced with a mixture of emotions, but I'm also reminded that all I have to do is what is right in front of me this moment.