And the Furkid throws a Curve Ball...

So, like I've said, we've been pretty preoccupied with the life and health of Clydas the Furkid lately. 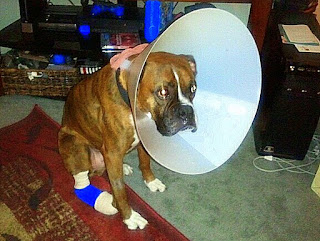 So Clydas went in yesterday for a bandage change (1 day early) because I noticed the bandage seemed saturated. It's been 6 days since his surgery by that point. He was due for another bandage change on Friday, but due to transportation issues and the look of the bandage, Thursday seemed better.

In we go and the vet has not so great news. She praised me for bringing him in early (I love that they work me in whenever I need it) and said that his wound looks angry. The stitches are holding, but it's still oozing more than they'd like, and it's red and angry looking (which explains why Clydas has been trying to lick at it more). So they gave us a new antibiotic to be ADDED to his current regimen, and requested I come back on Saturday so the surgeon could have a peek. They cleaned it up REALLY well and wrapped him up.

I dropped Clydas off at him with his inflatable Kong E collar and crated him so that I could run some errands, though I had a funny feeling he wouldn't leave his foot alone...

I should have listened to my instincts... he managed to practically fold himself in half to get around the collar and pull out bloody gauze from his bandage, WITHOUT DISTURBING THE EXTERIOR WRAPPING! Oy. We saw this as soon as we got him and rushed him back to the vet. They worked us in (again).

A new vet saw him and wrapped his foot up, and told us she wanted daily bandage changes. While I'd love to comply, I do not have an unlimited supply of money. Each bandage change runs about $55 (materials only charge). That's $385 for next week - this week already ran about $200. While we do have care credit, I'm trying to be wise about the whole thing.

Today we can't go in (no car, My sailor needed it today), so we're going in tomorrow, as planned. I'm going to ask if they'll let me observe at the next bandage change. While I completely trust their judgement, I think I'd have a better understanding of what we're dealing with if I could see it for myself.

Oh yeah - and because of Clydas' little inflatable collar stunt, he's earned himself a Cone of Shame. Thankfully, I'm home all day, so he only wears it at night and when I'm out of the house and unable to supervise. He seems to like his booty bandage MUCH better.