Deployment Check In and Entertainment of the Evening

Emotional: Been pretty stable this week, but very, very busy and focused. Tonight - Friday night, it's a bit tougher.

Physical: Good! Tired, but that's not new.I've lost a few pounds (through healthy means) this week so that's a trend I plan to continue if I can control it. And (TMI) It's nice not to have 'TOM' visiting, since I only got about 1 week of a break from it last month.

Communication: Non-existant. But I sent him with a small bag of goodies and a box of goodies as well, so I'm hopeful those will tide him over. I still write every day, but have no way to confirm anything is getting through and no replies is just part of the silent world of submarines.

What's something fun you did this week: Wine at MorMor and Red Dawn w/ the roomie and some fellow shipmates, tied w/ taking a couple youngsters to check out some Christmas lights.

What are you looking forward to next week: Figuring out what the heck I'm going to do for my birthday. So far, the highest things on the hit list are are Tukwila Mall for my free meal at the RainForest Cafe, and a movie while I stroll the mall. The funny thing about this idea is that pretty close to what I did last year for my birthday with My Sailor (though I was moaning and groaning that it wasn't 'special enough' the whole time - then again, I'm a spoiled Southern Californian - and now I'm CHOOSING to do it. I love a good irony...)


What made you happy : Odin being an especially good dog today!  Playing with my new running app and nice weather. And a few phone calls home. It's always nice to hear a friendly voice. Starting to write about Sihaya again boosted my spirits big time this week.

What made you sad/mad this week:Lack of communication, work feels like trudging through mud, and the realization that I'm getting closer and closer to 35 and the goals of family, being debt free, and being a professional writer seem just as far away as they did last year. (Adoption and "debt free" don't exactly go together.)

What do you miss this week: Snuggling w/ My Sailor and, well, lots of R rated things I won't discuss here.

How has the dog's weeks been this week:Well, let's just say running with both dogs, to an interval set in my headphones was NOT a good idea. But I got 1/2 the run in, and the dogs got a good walk in while the weather was clear (yet cold). Odin has 2 serious issues: #1 - I mowed the tall weeds grass in our front yard and he no longer feels like King of the Jungle walking around and pooping in there... so he takes FOREVER to find a new poop spot. At least, 10 minutes feels like forever when you're standing on the other end of a 20 foot leash in your pjs and snow boots waiting for a dog to poop.
#2 - Odin HATES pooping in the rain and will take twice as long if it's raining outside. If I get tired of the tug of wills trying to get him to poop, he has to go directly into the crate until I'm ready to let him out again because he'll slink off and find a place to poop IN THE HOUSE... It's eternally frustrating, but I'm sure we'll get through it.

Favorite song/show/movie of the moment:Beauty and a Beat (Justin Biber - I know, I know... I'm not into HIM, I'm just a sucker for a song that talks about winning a woman over and guys that want to show off their girls. It's VERY rare that I've been in that position in my life, and I'm sure the fantasy is much better than the reality, but - hey - a girl can dream can't she?); Star Trek: Enterprise (re-watching some old episodes courtesy of Hulu - it's like sitting with an old friend; and Porthos is a pretty cool name for a Beagle); Tangled... probably because it's the first Disney movie My Sailor and I saw in the theaters together, so it's nostalgia.

Clydas (the 8 yr old boxer) showing the pup (Odin, the Great Pyr, under 2 years old) who's boss in a tug of war match
Some of the best entertainment doesn't need a remote control. Just a rope. 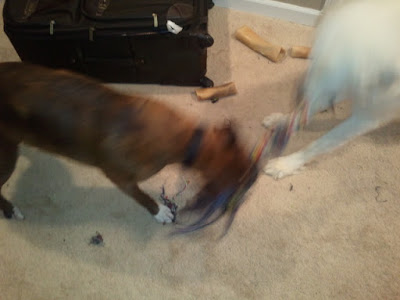