Well, I'm not in as much pain as I expected. ha ha yeah right! Write it for REAL now, J.
My hips are tight and feeling yesterday's run. It's not too bad, but I notice it when standing. It's actually a GREAT feeling, because my hips are EXACTLY where I want to slim down! More pavement running and gradual hills for me! Though tomorrow is my weigh in day, I snuck on the scale today and I'm back down 6lbs from when he left. 9 more to go to meet my goal - hopefully 8 after tomorrow AM.

Thankfully, my toe pain ended with some rest, and my blistered arch is FAR more managable today. I took a rest day and it was worth it. I finished up my Christmas cards to the folks on the Boxer Boards.

I had a good lunch with a new found "get through this deployment" buddy, also my race buddy, and tomorrow I'll be back at work.

There are SO many rumors that float around during deployments, that it's sometimes hard to know what to trust and what not to.Though I've heard a fair share of stuff, I only trust 100% what comes from my moral officer and what comes from My Sailor (or official word from the Navy). The truth is, I'm not 100% sure when he's coming home. I don't have a date and time to pick him up. I've heard a couple different things, but I'm not even sure. I just know that I'll get a phone call, I'll get in the car, and I'll go get him. As I've said before, Submarine life is the silent life. It's not widely publicized, so it's hard to get any information as far as what to expect - except for this:

Apparently there is a very real "boat stink", and it will be on EVERYTHING. So I'm going to have a tub of oxiclean on hand as soon as he gets home.

But other than that nothing is assured, except for maybe one thing: 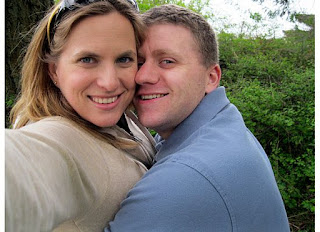 No amount of "boat stink" will keep me from hugging him for a good long time.