My four-legged Life - A Clydas Update

So this adorable 4-legged, 54 pound ball of brindle fur pretty much ran my life for the last week. Understanding that our pets are mortal reminds me to let go of the little things in life and just roll with the punches a bit better.

Since his diagnosis, Clydas has been allowed to cuddle with the "parents" (me and My Sailor) more often at night. He gets a couple more treats a day (his weight is under control), and he gets a new toy more often (usually My Sailor's doing).  He gets a few more random scratches throughout the day and a little less scolding (from both of us). 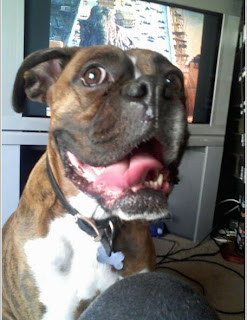 "In order to really enjoy a dog, one doesn't merely try to train him to be semi human.  The point of it is to open oneself to the possibility of becoming partly a dog.  ~Edward Hoagland"

Clydas has taught me a lot about life over his 7 years so far. When I got him, I expected to be the teacher, but sometimes I think he's taught me more valuable things than I've taught him. He's seen me collapse into a sobbing mess when I thought my world was crumbling, and taught me what a good friend is - someone who loves you even when you're a mess. He's seen me rise to the occasion - and reminds me that each day is "the occasion" worth rising to. He's been my traveling companion - and in doing so, he's taught me the value of a good walk in a small town. Through his occasional slobber and (more than occasional) gas, he's taught me that life will continue, even if there is fur on your clothes. In fact, sometimes life is more fun when you get down and dirty.

It's pretty obvious that I take my responsibility as a good pet owner very seriously. It's a title I want to earn every day. I know Clydas won't live forever, but I think it's part of my duty to give him the best, most comfortable life I can while he is around. After all, he's been my stead fast buddy (and some would joke one of the most stable males in my life over the past near-decade), so it's the least I can do.


With some good news bolstering my spirits (the knowledge that his cancer does not appear to be spreading), I know Clydas will be in good hands as he undergoes surgery this week.