Yesterday, I went to Portland and had a great time with friends. It was a much needed break.

On my way home, I got a phone call from Clydas' vet. See, Clydas had been into the vet on Tuesday. You can see a little bit about that visit here. Part of that I didn't blog about was that Clydas had a lump on his foot aspirated. They took a small biopsy to check on it. See, it's been there for a while, but I was just watching it to see if it got bigger, bothered him, etc. It never seems to cause him any problems. Boxers have a ridiculously high pain tolerance - I mean ridiculously high. Example: Clydas tapped one of the cats I used to have under the bed (when he still fit under there) and got a cat scratch ON HIS EYEBALL under the lower lid. He NEVER complained about it. Didn't rub at his face. Didn't whine. Nothing. So I didn't even know about it until I noticed green pus coming from his eye. Thankfully, he was fine. Another time, he stepped on a piece of broken glass while outside and CUT HIS PAD. He never cried out, never limped at all, never licked at it - nothing. If it weren't for the fact that we happened to be walking on WHITE concrete on our way home, I would never have noticed that he was tracking blood everywhere.

I check him on a fairly routine basis for injuries, bumps, etc, since I know what a trooper he is when it comes to pain.

Well, a while ago My Sailor noticed a lump on his foot. Thinking he just stepped on something that got between his toes and is working its way out, we kept an eye on it. Clydas never showed any sign of pain or discomfort. He didn't chew at it, bite at it, limp, nothing. So I assumed it was just a tag or something minor.

Since he was going to the vet, I had them take a look at it and that's where the biopsy came in.

3 days later, I get a voice mail asking me to call the vet's office.

When they didn't leave the results on my voice mail, I began to worry.

I called back, but I missed their operating hours. I was about to call this morning when the vet herself (not the staff) called me. During that conversation, my cell phone died... so I called her back and I finally got the news.

It's what they call a "Mast Cell Tumor".  When I read more about it, I noticed that they seem to change "on a whim" daily. And they are right. Today, it's small.


But to sum up, it's a cancerous growth that has often malignant in nature. They are fatty tumors that have little tendrils that ooze out into the surrounding tissue. Problem is, they release chemicals (like histamine, etc) which can cause problems when released in chronic excess.

Since they tend to spread out their tiny little microscopic malignant tendrils, they are easy to remove when they are in the fatty parts. Surgeons just remove a little more the tumor they see to make sure it's not spreading.

That's where Clydas is "special". His tumor is between two of his toes and is about the size of my thumb above the top-most joint. There is NO fat between his toes. So here are the options:

1) Lumpectomy - Remove the lump. It'll most likely come back based on it's location. There isn't enough tissue to remove all the tumor.

2) Amputate those 2 toes - This will most obviously hurt his mobility level.

3) See a Specialist - Most likely a doggie Oncologist would do the Lumpectomy and follow-up Radiation. High level of cure rate, but an expensive undertaking.

The Vet is great and I do trust her. She OWNS a boxer, as does the woman who owns the animal hospital, so they understand this unique breed very well. I highly respect that she didn't strongly recommend the option that would make her the most money (Lumpectomy - as it would mean return visits). She actually seemed to lean towards the Specialist option.

There is some silver-lining here. Boxers are more prone to grade 1 and 2 mast cell tumors than they are to grade 3 and 4. The higher the grade, the more dangerous the tumor. Since this isn't near any of his vital organs, it's not immediately life threatening.

And Clydas isn't in any visible pain. I keep reminding myself about this. He's had this for a while and hasn't been really showing any signs of illness, which puts me at peace a bit. The Vet is also encouraged by Clydas' age (he could be at "mid life"ish right about now) and overall fitness. He's in great shape, weighing in at a perfect 54 lbs at his last visit, and overall wellness is a good thing. I'm trying to focus on that right now more than anything and remind myself that, whatever we choose, this will be a long journey, but well worth it I think for this member of my family.

I decided a long time ago that the ONLY way I'd throw down over $2k for an animal is if the treatment is likely to be a CURE, rather than a "treatment". This may be the case where the Specialist answer comes in... 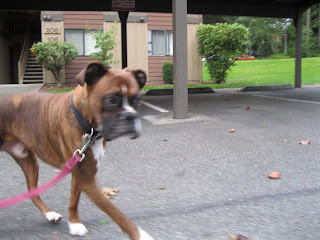 As luck would have it, this is laid in my lap while My Sailor is on duty, so we won't be able to discuss the options until tomorrow.

Don't worry - Clydas is going to get lots of love, especially today. I may be starting a special blog for Clydas' treatment, depending on what we decide. For now, he's curled up in his Tummy Warmer on the couch. Stay tuned...