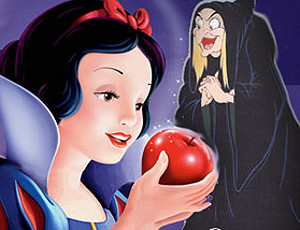 So today I sat down to work and popped Snow White in the DVD player. And ya know what? The Evil Queen has style. Seriously -who doesn't want to wear an amazing cape like that and swirl it out as they walk down a staircase? Snow White may be younger and prettier, but ya gotta give the queen props for having some style.

She's got to be in the runnings for the most fashionable Disney Villianess.

That said, I seriously miss being an hour away from Disneyland. Annual pass in hand, I'd dive into the parks with friends, or solo, often just to blow off some steam and take a break from the real world. I guess sometimes you don't realize how spoiled you are! Okay, I realized it, but I'm in a Disney mood today. Well, a stronger Disney mood today than other days.

Which is turning out not to be such a bad thing. With My Sailor off doing his duty for at least the next 48 hours, I'm flying solo. I've decided to do all the basic weekday stuff (work, work out, walk the dog, a household chore or two) and then relax to some Epic Mickey and some classic Disney movies and shorts with a big bowl of air popped popcorn.
Posted by -J.D. Humenay at 8:17 AM