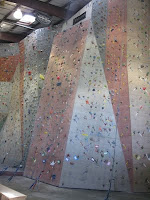 Remember this post where I talked about cutting my nails so My Sailor and I could go to the indoor rock climbing gym?  Well, we were too exhausted to make it to the gym that weekend, so we took a rain check and checked out Vertical World Saturday morning instead.

And MAN was it an awesome experience! I can add this to the list of "things other people made me do that have made me a better person" - right next to that first Triathlon Bon Bon made me do. 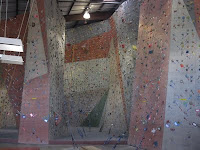 Doesn't this place look intimidating?! Whew! But a few great discoveries came from this adventure. The first discovery showed me how far I've come in mastering a few of what were my major insecurities. No, a fear of heights was never one of them. 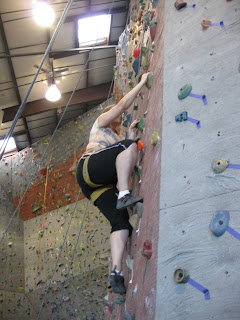 See, there were only a few other people in the gym, and we were by far the largest people there, weighing in at a combined total of 416 pounds. (We've been losing, but it's a slow and steady process.) So that made me the largest woman in the building. Now, a younger version of me, who hadn't completed (much less would have attempted) 2 triathlons, would have been too scared to go up on the walls. I could feel that insecure thought of, "Just sit it out on the bench and watch. You can take lots of pictures," pass through my mind. (If you've spent any significant duration of time obese or worse, then you know exactly what I mean.) It's the "inner fat girl" talking (or "stinkin' thinkin'" as my Dad calls it) that I'd chosen to believe FAR too many times in my life. 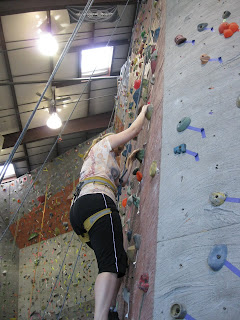 Since reclaiming my health, I stopped giving these thoughts the power I would have a decade ago. I trusted the other thoughts that were quieter, but present. The thoughts of: "If you don't try, you'll never know if you can do this." and "You already know you're capable of more thank you think you are." and "My Sailor thinks I can do this. Than I can. The employees will make sure I'm safe."  I chose to believe them instead, but that doesn't mean there wasn't a natural little fear there still. Having the encouragement of the coach and My Sailor was huge... But I'm getting ahead of myself.

We checked in at the front desk and got our climbing shoes and harnesses. We moved on to our first wall and I was nominated to go first (thanks, love).  The employee who was manning the ropes and coaching us explained the route system and we picked a beginner's route for me.

About half way through, I realized I wasn't breathing. But I was half way up the wall already!  I stopped for just a few moments to breathe and continued. When I felt like quitting, I just remembered what got me through the 2008 Disneyland Danskin Triathlon - my first. Whenever I had the overwhelming urge to quit (which was FAR stronger then than it has EVER been before or since), I just figured out what the next step was. As I focused on taking each step individually, I realized that I really could continue and was more capable than I thought (Gordon Harvey of my favorite podcast would call this The Central Governor Theory).  So I focused on where to put my foot next. With a little reminder from the coach to "Keep moving" (she was probably afraid that, as a noob, I would freeze up), I made it to the top of my first wall!

And then she suggested a 2nd wall (after My Sailor had made quick work of the route I took) with a more difficult route. I felt the changes, but again, I made it to the top, on my first try, without falling. (Even someone I didn't know in the gym was surprised at my quick progress!) Coming down covered in sweat and a great smile felt awesome. I cheered My Sailor on as he took a trail up that wall as well. It was much more difficult and he struggled with the start. The route was called "Tupac's Alive", you know it must have been hard.

We moved on to the third wall. I spent a good half an hour trying to conquer this wall. And I'm sorry to say, it kicked my butt. Already tired from the first 2 climbs (hey, it was my first time ever) I seemed to have met my match. But ya know what? I was okay with it. I know I gave it my all. My arms were shaking so badly I couldn't grip anything. My last fall actually resulted in the grip ripping a few layers of skin from one of my fingers, and I developed a callus on the other hand. That didn't take long!

So I didn't make it to the top of my 3rd wall, but I'm actually very satisfied with my progress. I did more than I thought I could, AND I have a goal for NEXT TIME. That's right. There WILL be a next time. And then I will show that wall who's boss!

My Sailor is a strong climber! I guess beneath all of our chub are 2 very strong people!

It's "the next day" and my arms are feeling the work out. Parts of my arms I have trouble working out are sore, which is awesome. We talked it over and this is sure to become a regular thing, so stay tuned for updates!
Posted by -J.D. Humenay at 8:47 PM