In 2009, I went to Disney World with my best gal pal, Sistah' Girl.
We were celebrating being around 180 pounds. We had used Medifast to get that far - weighing and measuring,  counting every calorie and carb, etc.

While I was 'thinner', I wasn't exactly what I would consider "fit" by any stretch of the imagination. If you'd asked me to run a mile, I probably would have passed out. I averaged 1000-1200 calories per day. My hair fell out in near handfuls and was dry and brittle. My feet and ankles still hurt on a daily basis.

I didn't have a single bruise from weight lifting, or a single rug burn from indoor soccer. I had no idea what 'weight lifting' really was. I could do machines, but who needed that?! Putting on muscle made me gain 'weight'! It was all a numbers game after all, right? The lower my weight, the healthier I am, right? (If you answered, "Yes": Do not pass 'go.' Do not collect $200. Go directly to jail.)

But I was lighter, and those khaki shorts were still uncomfortably snug. My shirt covered the 'muffin top' and the indentation they left on my waist and other parts of my anatomy was painful by the end of the day. But I was thrilled to be in a size 16.

In 2011, I went to Disneyworld with My Sailor and his family. I packed those same shorts.

This time, 1/2 way through the trip, I couldn't even button or zip them without fear of them exploding or tearing... so I had to make a detour to Walmart to buy another pair of shorts, several sizes larger, despite only gaining 20lbs.
In 2013, I took a last-minute vacation with My Sailor to Florida. Since it was last minute, and I had just started training a few weeks before, I didn't have time (or money) to buy new clothes. So these same shorts from 2009 made it into my bag. Again, they were uncomfortably snug. Thanks to my training, I was able to button them, despite weighing in about 40 pounds more than I did in 2009. This was around 220lbs.  I gained 8 pounds on this trip as well, despite adding in daily minor work outs to my trip schedule. Obviously something was just starting to click into place... but regardless -

these shorts always make it into my travel bag.

I'm not sure why. They don't stretch and the color isn't terribly flattering and, as you can see, they have track record of fitting poorly.

This trip was no exception. Today, the temps hit 80 degrees, so it was time to break out the dreaded ill-fitting shorts yet again.

I expected them to be tight and uncomfortable. After all, I'm still about 200lbs. Though I'm eating right (with the exception of a little extra alcohol) and working out, I'm also traveling, so I expect things to bloat a bit. I haven't weighed myself while I'm gone - and don't plan to do another weigh in until I get back (or possibly even until May, after the 5k and my Florida trip). So, being 20 pounds heavier than when these shorts were first 'uncomfortably snug', I expected them to react the same way this time...

What I didn't expect 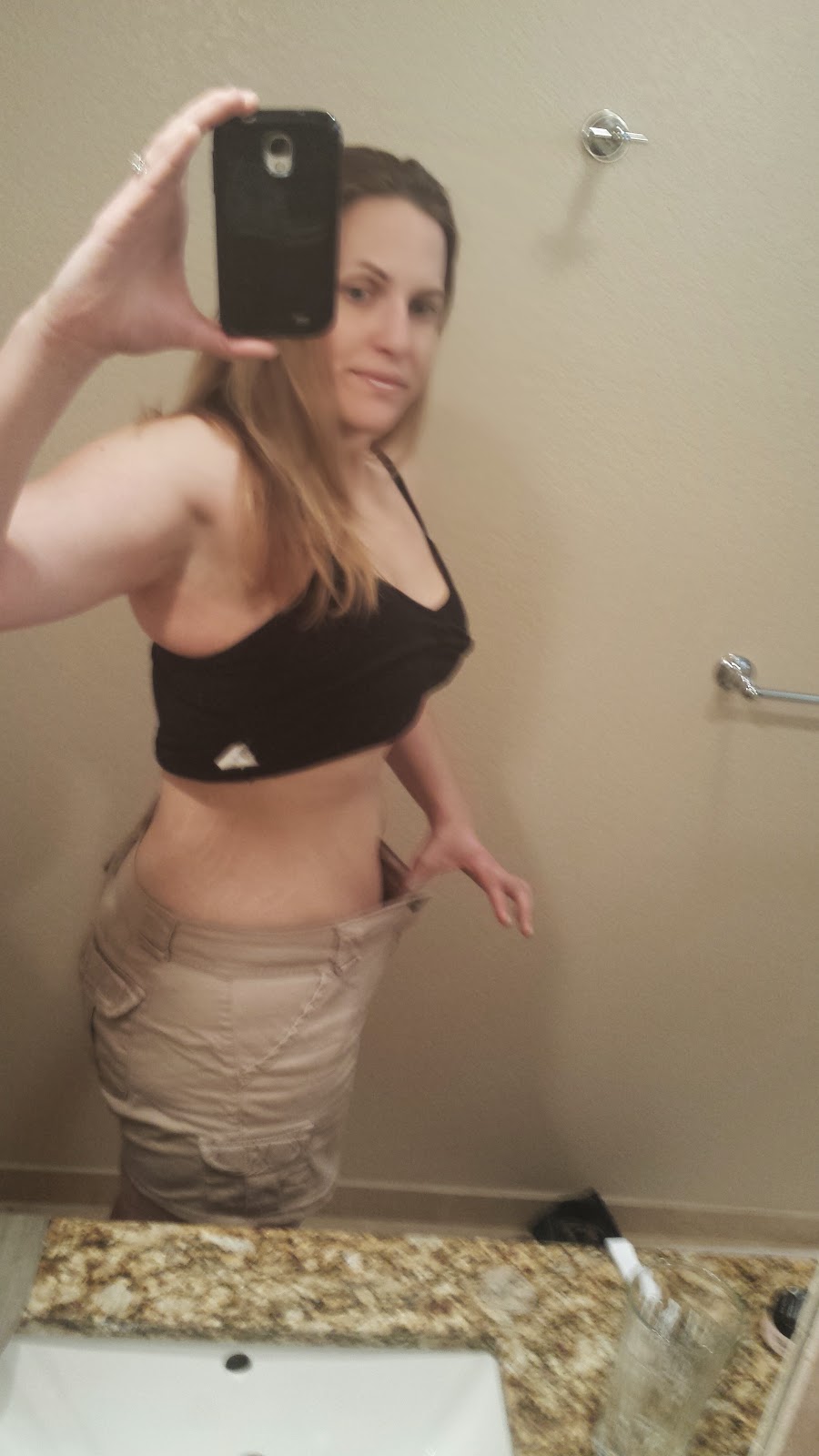 was not to need the button or the zipper.
I've been pulling them up to get them to stay on my hips all day.

Last summer I wore skirts when it was warm to avoid the shorts issue all together.
Turns out this year, I might just wear shorts after all.

I went to get my hair cut, after a year of not seeing my stylist. She noticed how remarkably healthy my hair looked and felt. She asked what I was doing differently.

I cracked some joke about, "I eat bacon every day."  It opened the door for the discussion that I choose to eat close to the source whenever possible, and I eliminated grain (aside from the occasional beer) and corn from my intake.  I eat more fats, both from things like avocados and usually one source of saturated fat per day (like uncured, nitrate free, local-when-possible bacon). I no longer weigh or measure out my food.  The things I eat are down right difficult to overdue. I eat when I'm hungry. I don't when I'm not. I don't really get 'the munchies' anymore. I'm either hungry or I'm not. Not a whole lot of 'I want something to crunch on' anymore (which was challenging on Medifast- a largely liquid diet).

Now that said, I got some unfortunate news yesterday. There has been a lot of good happening here lately and it seems it's going to take My Sailor longer than expected to be able to join the party. It was pretty apparent that I needed to blow off steam. Normally, that would mean I'd just go blare some rap music and head to the gym to sweat it out, but that wasn't an available (or intelligent) option this time.  My back was still recovering from some messy, heavy deadlifts the day before, and I'd already run nearly two miles as part of my 'recovery'. As if that wasn't reason enough (and, honestly, in my irrational state, it wasn't) to forgo working out further,  most gyms were closing early due to the holiday (Easter) and my gym clothes were in the laundry.

So what's a girl to do to blow off some steam?

Call up Mud (who shall hereby be known as Justice) and go singing! 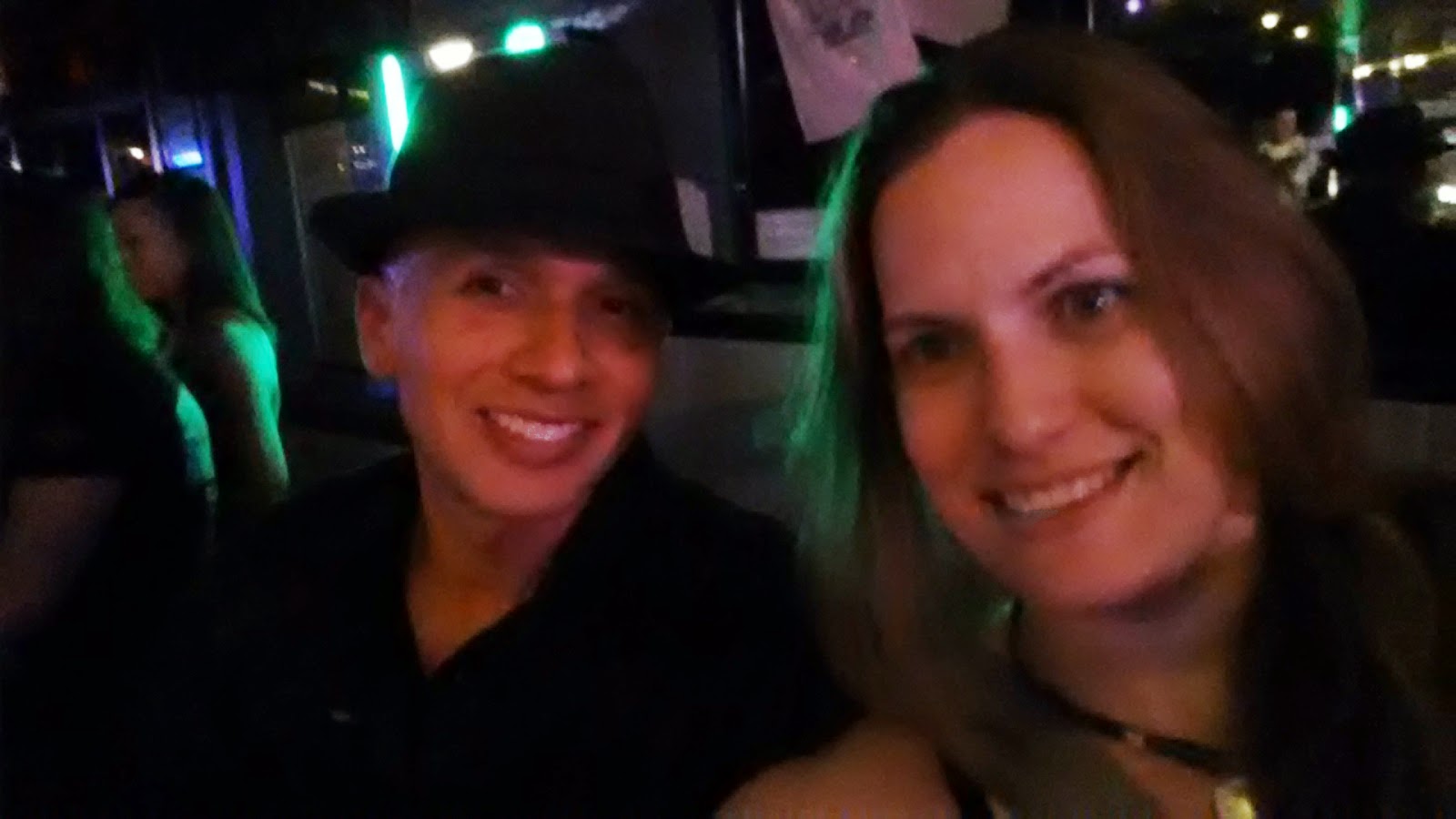 In case you didn't realize this, we met doing a musical theater production. We actually didn't hit it off right away, but eventually grew to become pretty good friends. He was a life saver for me and Clydas as I recovered from surgery back in 2010ish, and he's always been a great, fun, positive energy to be around. He's a talented dancer, singer, and karoeke dj in his own right. (He also Dj'd my wedding a few years back.)  Our first duet was for a birthday celebration for a local (now passed away) theater owner. Justice was nervous about singing Josh Groban's "You Raise Me Up". So, 15 minutes before his stage time, I coached him through some of it. Still nervous, he asked me sing with him during the performance. I knew the song and agreed. Something magical happened on stage and it sounded amazing. Lightening in a bottle. Since then, we continue to enjoy rocking out some fun duets.

Now that he's learning some lifting from me, we have another fun thing in common.
While I love the gym, it was a blast to get back to some tunes. We only sang a few, as the bar got crowded after about an hour. I started out with an old favorite rock song,  "Bring Me To Life", and we followed it up with a few duets we've never done before, "Just Give Me A Reason", and a number he's working on as a rapper.

I was more than happy to crank out some back-up vocals for my buddy - and he was kind enough to bail me out on a song I've never actually sung before. Nothing like a dark and bar full of Marines as a cheering squad.

Make a video - it's fun, easy and free!
www.onetruemedia.com
In case you're curious - this is how the pros do it... Empire State of Mind - Jay Z and Alicia Keys
Posted by -J.D. Humenay at 1:35 PM