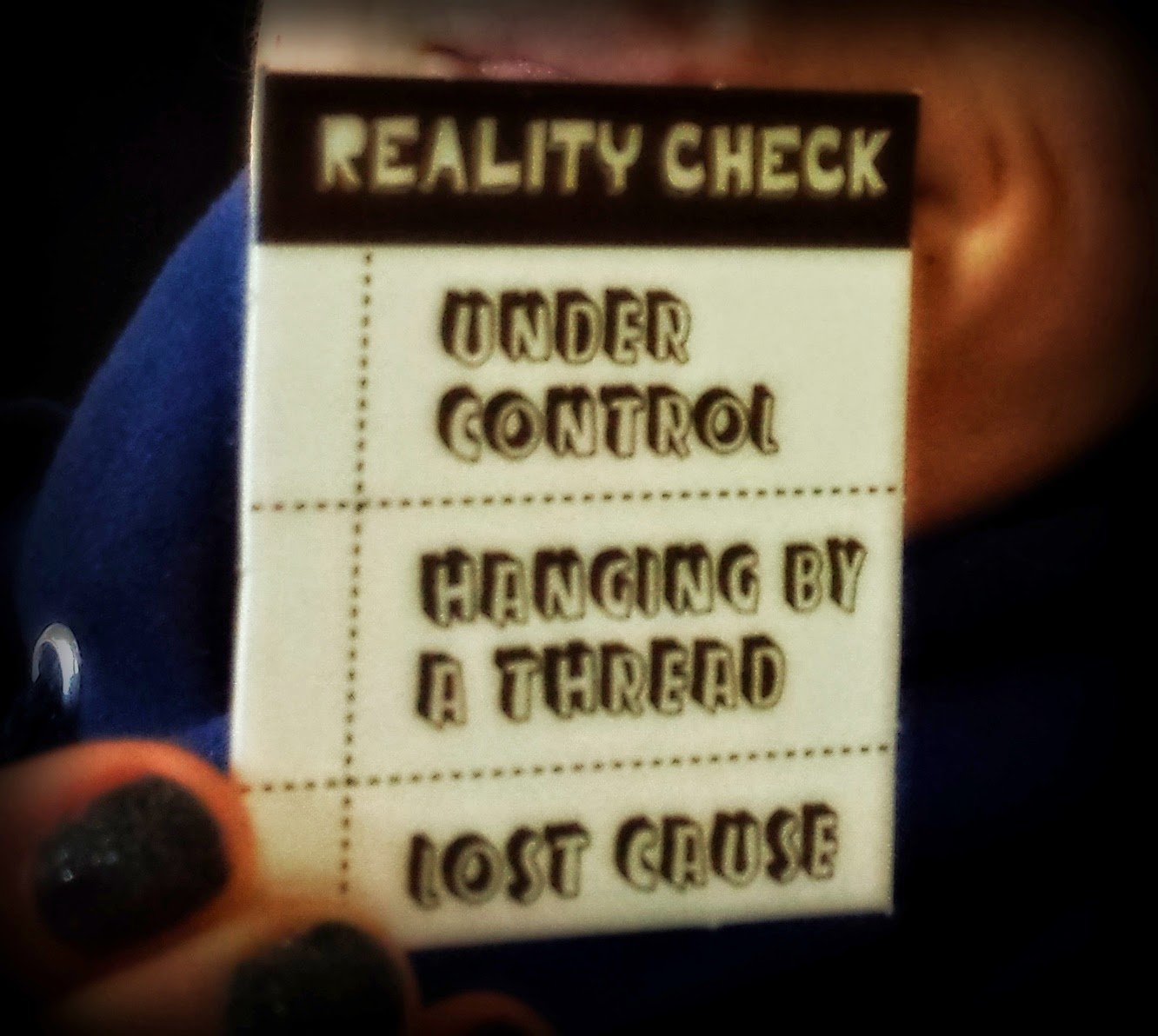 (Click here for a little Motivational blog before you read on.)
No Personal Records in the gym to write about today.  Nothing too legendary going on there - but lots of fine tuning happening. And I mean a LOT.  The Snatch lifts are not my favorite things to do. In fact, I think they are ranking right up there with burpees currently. The detail involved is really challenging to get perfect. I'm learning a lot about body shape and the challenges of having a long torso and long legs and being a lifter. Luckily, I'm in good company. In those ways, Trainer Guy has a similiar build - so sometimes his tips and tricks translate well. (And if they don't, the Scottish Yoda is usually clever enough to find a different approach.)

That said, I have been noticing some big changes in the mirror and, oddly enough, in my clothes as well. T shirts that were snug on me 2 weeks ago, are suddenly baggy. AndiGirl reminded me, "Soon you'll have abs!" It's made me pay a little more attention to the changes going on in my core.

Here's the thing - I have been doing LESS conventional 'ab' exercises sit ups than ever before, but there is definitely some definition slowly making it's way through the fluff.  I have been doing handstands, hanging knee raises, and lots of overhead squats and goodies like that.  It's all a cumulative effect and paying off.

Oh - and I've been eating like a freaking horse. Staying to Paleo type stuff isn't hard, but I eat a lot. It seems like I go from zero to 'OMG-I'm-Going-to-Go-Cannibal-if-I-Don't-Eat-Right-Now!"

So, with all of this going on, I was wondering if my metabolism is really firing up or what. I decided to get on the scale.

Now, I want to be clear. I didn't stress out about it, or 'pre-plan' my weigh-in. This weekend, I enjoyed myself. I went to happy hour for Sunshine's birthday on Friday night where I had 2 glasses of wine, some delicious skewers, and most of a piece of flourless chocolate cake. While the weekend had me spending a lot of time under the bar, it wasn't as puke-worthy as my usual weekend workouts, and Trainer Guy shared chocolate...I did a short run on Sunday with Odin. Though running with a distractable Great Pyr should probably be classified as resistance exercise,  I didn't play soccer.  I went out to dinner with a friend and had a Guiness (on tap... yum!), steak, and dessert (flourless chocolate cake again -the first one was better but 2 in a weekend is a lot for me). So I was actually expecting it to say the same it has in a while, if not a little higher for all the eating out.

A year or so ago, I'd be getting ready to get down on myself. I'd be ready to feel bad about the 'damage' I did over the weekend.

I just plopped the scale into place and stepped on it out of curiosity. I looked at the wall as I stepped onto it. No matter what it said, I'm healthy and more fit than I've ever been and it's amazing. 'Weight' is not necessarily a measure of fitness or good health, right?  If you're following my blog, you've likely already wrapped your brain around the fact that 'weight' and 'fat' are two different things.

To my surprise, the scale showed 200 on the nose this time... 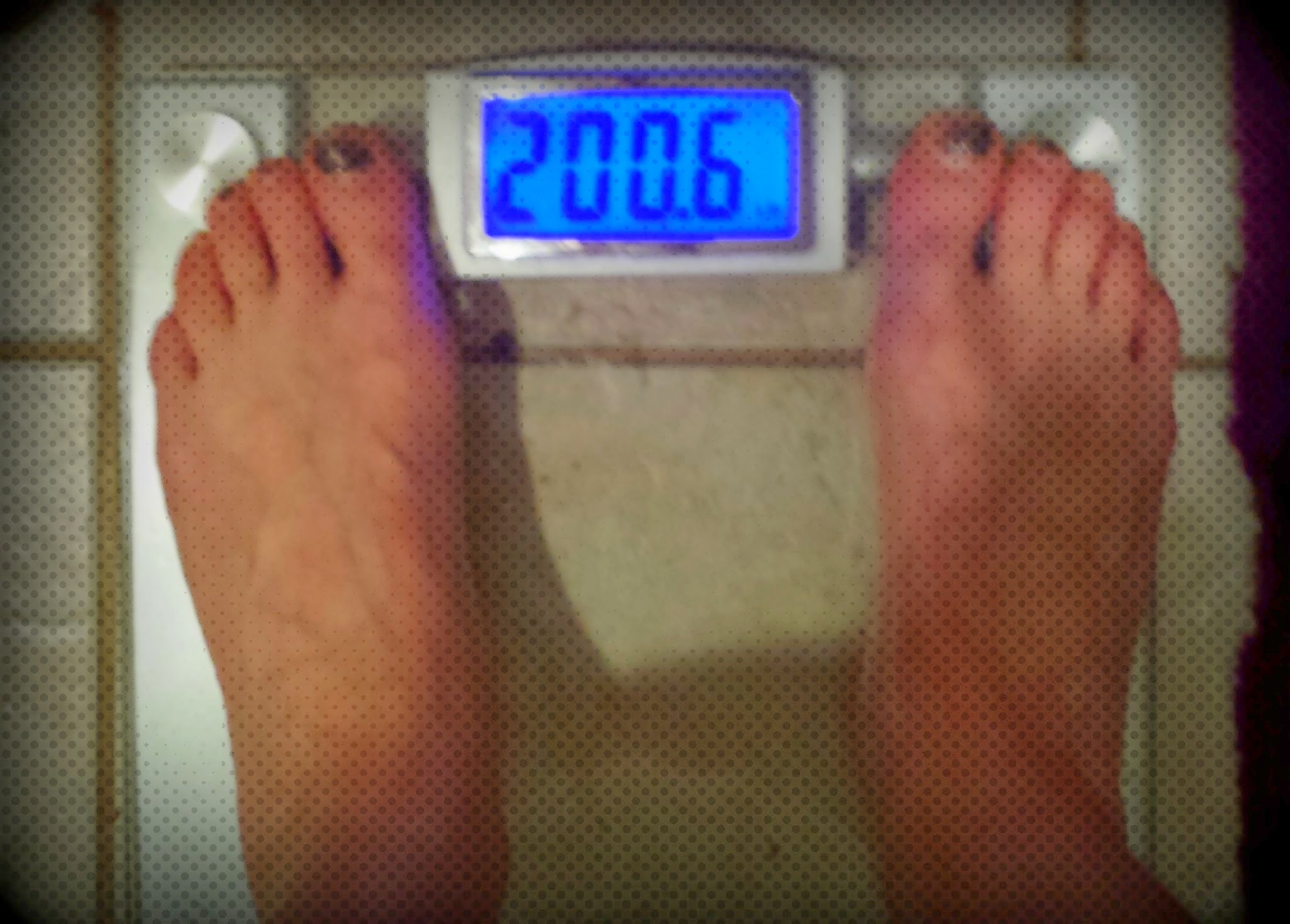 The last time I was 200 pounds - I looked very different.

My hips were MUCH wider. My feet still hurt pretty much all the time, and I was watching (and logging) every little thing I ate. I would stress out about sodium content, carb content. I was eating things like Lean Cuisines and Healthy Choice Soups.  I'm not sure what my measurements were, but they are a far cry from where I wanted to be. I wasn't necessarily unhappy with my weight at 200lbs, but I still felt like I had a long way to go. And honestly, I highly doubted it would be attainable anyway. While it was progress, it was a 'short term' goal. I wanted to do what so many other military spouses do. I wanted 'lose weight' while My Sailor was deployed to 'surprise' him with my new hot look when he came home.

I had no plan (or, if I'm completely honest, intention) of action to that included continuing. I was working out just by running (which resulted in a stress fracture in my foot during my first Washington State 5k) and getting on an elliptical (which hurt my feet, knees, ankles, lower back, etc.)

Again, to say I was 'unhappy' at 200lbs isn't exactly true. I was pretty proud of my curvy hourglass figure. I felt 'capable' of most of the things I wanted to do, and that was enough for me - then. Admittedly, my standards were pretty low by comparison to what I consider myself capable of now. Then -  I just wanted to look good in that dress. That's it. I could zip it, so I was pretty happy with it, even though it's clearly tight enough (in the flared portion) to see the rolls of fluff.

I thought I was resigned to having 'wide hips' forever. And yes, genetically speaking, the hips will only get so narrow. Just like my rib cage. I'm pretty much as small on the upper part of the rib cage as I am going to get, short of breaking bones and rearranging organs. (NO THANKS!)

2011-Me I would have thrown a party about hitting 'one-derland'.  Now, I'm actually surprised to see it approaching so fast. Now, I'm focusing even more on my nutrition and workouts and lifts to ensure that the muscle is carving away the fat, rather than the muscle wasting away just to make the scale drop.

The scale drop is just a by-product of everything else. I'm fully aware that it could be higher (or lower) on any given day, for a million different reasons. The longer I keep on this journey, the more it's a habit to be good to my body, rather than to be into it. 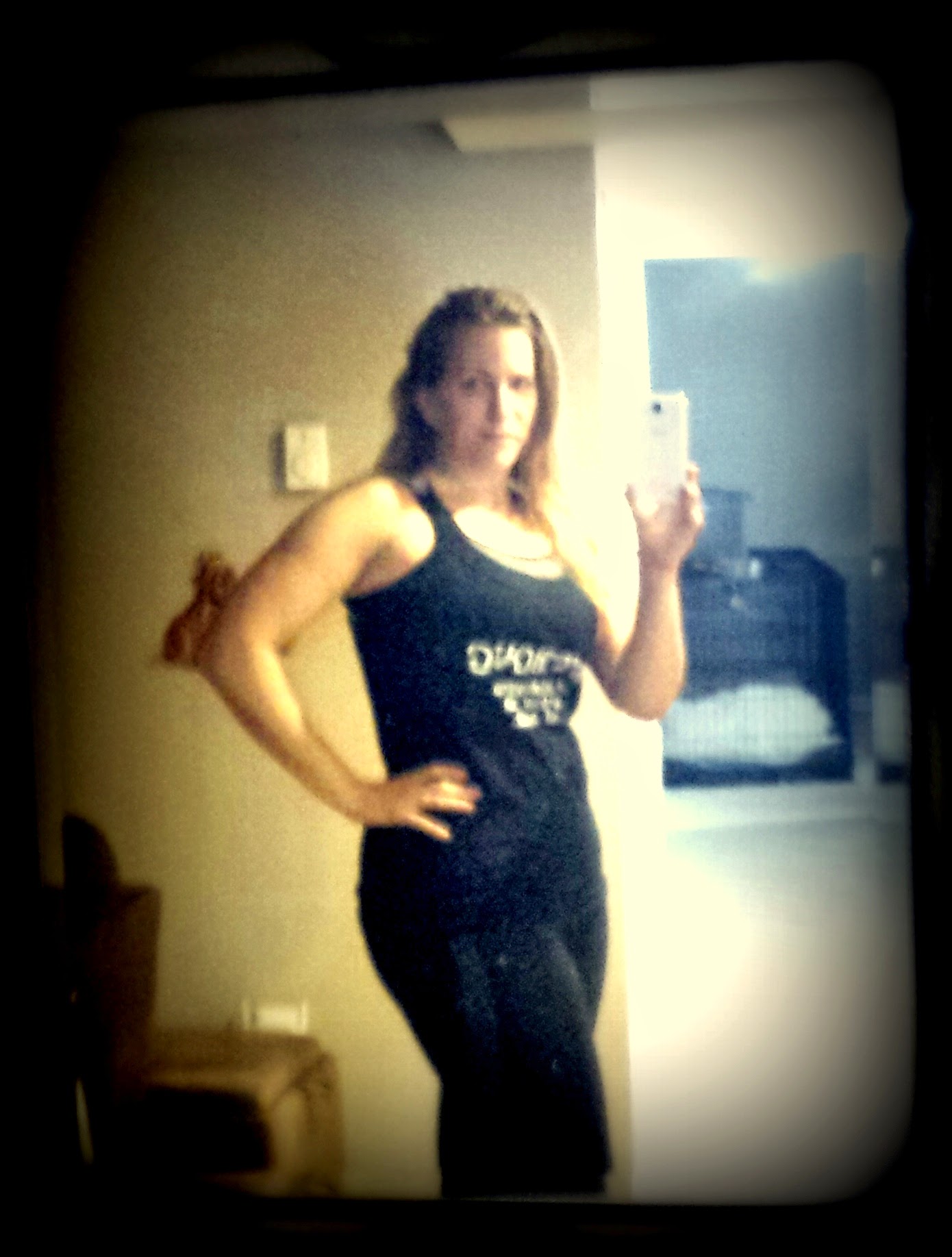 And, instead of breaking my feet trying to get them to conform into the wrong shoes, I run in simple Innov8's. Instead of killing myself logging every tiny morsel that goes into my mouth, I've moved to eating clean, when I'm hungry, and I've gone grain free (aside from the occasional beer).

Instead of being super excited by being on the verge of 'one-derland' on the scale, I'm super excited to be strong enough to front squat this... more than once...
The main reason why I'm excited about a drop on the scale coming is that it makes the ratios of lifting to body weight is meeting up in the middle.

Here's how the math rolls out:

Just the thought of being able to lift more than I weigh still seems unreal. Mind blown.  Even as I get stronger, it's hard to not marvel at what my body is capable of (and shake my head and grin at how I managed to underestimate it for so long).

As those ratios increase, I become more of a force to be reckoned with when it comes to lifting competitions. But competitions aside, getting stronger and stronger translates into other places in my life. I find myself slowly willing to take more and more risks. My priorities are changing and lining up in a different (and honestly, healthier long term) area.

The crazy thing about happiness and security is that it's contagious.