Summer Time - Bailing Out and Sticking It

No doubt my mom will have some amazing pictures from our hike at Fort Worden for me to share later, but this week, a few things happened that are completely blogworthy.

It's going to be a very busy summer. I have a 5k coming up in about a week.

Our roommate is moving out, which means it's perfect timing to get the carpets cleaned by a pro, sing around the house at the top of my lungs and not worry about bothering anyone, and have all of my model gal-pals over for underwear-clad overnighters! (Yes, that last bit was supposed to be funny. Don't come rushing to my house with binocculars hoping to sneak a peek. We don't actually do that.)
With the credit card debt out of the way (yeah!) and the weather taking a turn for the better, I'll be doing some landscaping every spare second I have.
And I've been using my down time (I know, 'what down time?!') to get some further reading.  Now, there will be a blog post coming up about what I've been reading, but this isn't that post. Tune in later this week for that one.

Oh yeah, and they put up Dad's memorial plaque in time for the 4th of July. 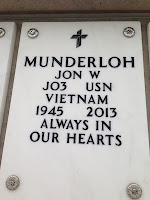 As busy as this summer is becoming, it's already made some of it's themes known. Or rather, it's reminded me of some of the life lessons I haven't been implementing lately.

For example, last week, I had to full on bail out of a lift. Twice.
I eventually accomplished it, but I realized that sometimes, when your start is just a little bit off, you need to bail out for a while, fix it, and start over.

My job is really at that point. While I appreciate the ability to work from home, I haven't seen a raise in nearly 5 years. Morale is at an all-time low, and that's a large part of it. Let's face it; I'm not doing anyone any favors by 'toughing it out' anymore. In the beginning, I was willing to stick it out and see where the economy went, but as the company is growing and, well, I had to move to a state without a state-income tax to see any changes in my pay, I think it's safe to say it's that time.

Time for a new frontier. With the credit card debt out of the way, I can more confidently look into other day-job coding work, while I devote more time and energy to finding paying writing gigs.

While I'm not leaving one job until I find another I'm satisfied with, it feels good to take steps in the right direction.

In other news, I shamefully admit that I haven't added to Dad's book in a while. Far too long, as that headstone reminds me. You see, when I look at that headstone, it's a nice recognition of family history, but for me, Dad isn't 'there'. Oh, sure, I'm not in denial. I know his body is there.But he's no more 'there' than I am in my shows sitting downstairs. There are some dead cells in there, but I'm barefoot in my office loft.

Yes, I still get choked up when I think of a few of the moments of his last week - but that 'choked up' doesn't revolve around Dad necessarily. I mean, yes, I miss him painfully all the time. I'm still relieved that he's no longer battling cancer. I'm relieved that there are no more people coming to say goodbye. I'm proud of the way Dad handled those encounters. I'm proud of the way he loved us, his kids, no matter what the genetics card said. I'm grateful to have had him in my life. That doesn't change. The things that bring tears to my eyes are the heroics I see all the time from my mother and my brother. I'm well aquinted with being alone, but Mom isn't, and she's braving new frontiers. My brother's heart is showing more and more, and, knowing our history, that is nothing short of heroic as far as I'm concerned. It takes a lot of courage to be honestly emotional. So, sure, I miss Dad like crazy, but that's all the more reason to get back to the pad and get some serious writing done. Get those memories and moments down.

I still have a goal to get it finished by the end of the year - and hopefully - printed. While I'm all for technology, there is something about the weight of a real book in the hands that seems more appropriate for this project.

So, while my day-job situation may be changing (5 years and no raise... I'm in the market for a new adventure on that front - hopefully something less stressful that will give me more time to write and find paying writing gigs), this I'm not bailing on.

I may still be working on kicking up over my head to get my wall handstand just right, but...

This is one landing I'm sticking.