My Badge of Badassery Comes in Purple! 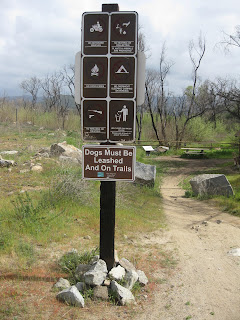 If you haven't been following my blogs for years, you may not remember this mountain bike excursion I took with GreenGuy. I think it was around 2008 (correct me if I'm wrong on this one).

We were both learing how to use the gears on our bikes, so it was a challening, winding ride up a good sized hill. (Living in Washington State has redifined a 'mountain' or a 'hill' for me. This was in my hometown of Escondido, California.) To my shame, I wasn't confident enough in my skills or my strength at the time and ended up walking a bit of it.
We came across some pretty nice people, and, well, how often do you see an entire active bee hive hanging out in the some of the outcroppings of rocks?!  I was mesmorized and got closer and closer and closer to snap a few photos. 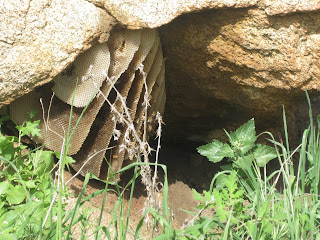 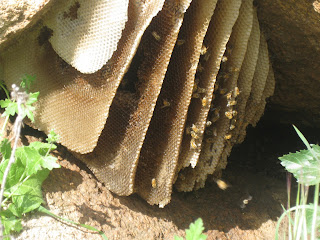 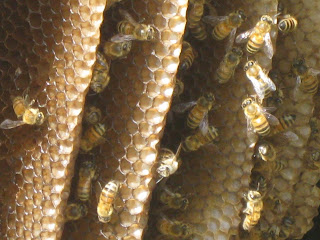 This is about where GreenGuy said, "Well, we know who's not allergic to bees!" True, I have no allergy to bee stings (that I'm aware of... come to think of it, I'm not entirely sure I've ever been stung...), but it wasn't until later I learned that hives like this (exposed to the elements) are often hallmarks of Africanized Bees... which can be very bad news when pissed off (and killer bees are pretty easily pissed off).  Had I known, I may have opted to keep my distance, but then I would have missed the experience of being a breath away from fresh wildflower honeycomb (which smells as delicous as it it sounds).
Sometimes ignorance of a thing keeps fear at bay...
The view from the top of the hillside was pretty awesome. ﻿﻿﻿﻿﻿﻿ 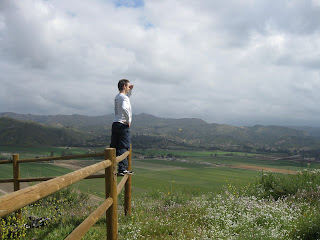 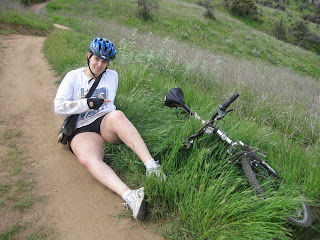 I flew over my handle bars and ended up flipping my bike completely (remember when I said we were headed downhill). I landed HARD, but luckily, my biking gloves took most of the abuse, but it was my chin that helped break my fall. Amazingly enough, no broken bones or chipped teeth! I finished the ride, but boy, did I feel that one for a while afterwards!

It really does amaze me how my body still bounces back, even as I duck into my mid-30's.
And yes, I'm still as graceless as ever when it comes to bumps and bruises.

Well, it wasn't, and I went head first into it when I failed at the handstand. It was similiar to this fall. My hands were already on the ground. Then the chin hit. Then my forehead hit the table leg at about the hairline, and then the back of the head hit the table leg. Finally, the inside of the right knee came crashing down on top of the table.

I wish I had video taped it.. I swear it would have been a youtube sensation.

The next day, nausea set in, and confusion and mood swings were rearing their ugly heads, so I dashed off to the ER. Long story short, it turns out I'm so bruised up from my training, I had to convince 2 nurses, the MD and a social worker that I wasn't being beaten at home despite the fact that I didn't even mention my bruises. I went in for my head injury. The whole line of questioning caught me by surprise (and added to my confusion). My Sailor would never raise a hand to me (and God better help the man who tries because he'll need divine intervention to save his sorry arse from me), and, to top it off - he's out Finding Nemo anyway.  Apperantly, handstands aren't something 30-something year old women regularly attempt...Though they should be, damn it.
I'm sure it looked suspicious that I can explain every single bruise on my body as inflicted by 'feats of badassery'.

I'm still convinced I can figure out how to do an unassisted handstand, but I'm taking a break from that particular movement for now. At least until the Strongman Competition is over and my concussion is solidly healed. After all, if 10 year old me can do it, why can't 33 year old me?

In the mean time, I'm really enjoing my training as I get ready for the Strongman Competition this August.
﻿﻿﻿
﻿

Lucky for me, purple is my favorite color.

The thing I love most about these things - I didn't get them sitting around like a bump on a log. They are just new footnotes on my road to badassery.