An Elephant, A Babe, and a few Good Books - Aka What I've been reading lately

If you're reading this blog, you have to have a healthy sense of humor. If there's one thing I'm constantly challenging myself on, it's getting over the whole "fear of failure" thing. EVERYONE has it. But the funny thing is, we're not born that way. Kids are known to do all sorts of crazy things. In the gym is the easiest, most obvious place for me to stare that down.

I'm working up to doing a full on handstand. I can do wall walks and slowly walk my hands closer to the wall, inch by inch. But I want to be able to kick over my head (using the wall for support) to do a handstand. I know I CAN. The strength is definately there. The balance is there, but the confidence, frankly isn't yet.

But boy did I have fun trying yesterday! Folks were running the indoor track and giving me a momentary pause... "What if I fall and someone sees?" I don't believe in banishing such thoughts. I let the mental dialouge continue. So I channeled my inner therapist.
"What IF someone you don't know and may never meet again sees you fall trying something new?"
"Well, then I'll be a little embarassed. But if I was actually hurt, I'm sure they'd stop and help. If I wasn't actually hurt, I'm sure they'd just keep going and tell someone else about this crazy chick at the gym banging her butt or shoulder into the wall. I'd get up and keep trying.""And what would be so bad about that?""Nothing.""And what if you don't fall? What if you make it?""Then someone will be there to see it! That would be pretty cool." "Are you ready now?" "Yeah, let's try it."You get the picture. Problem solved.
I don't believe I look like an elephant doing most of my work outs (and even if I did, elephants are pretty much my favorite land walking animals, so I wouldn't exactly be offended - they are SUPER strong after all). I don't really believe I look like an elephant at all, but it's really funny how, when you get a good sweat going on, you feel suddenly super fit!
Now back to what I've been reading lately..... 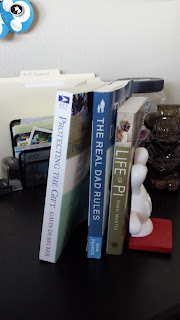 The Life of Pi by Yann Martel - I was warned that this book is good, but slow to start. I haven't seen the movie yet. It'll be on my To-Do list as soon as My Sailor goes underway again. While he's interested in seeing it, whenever the oppurtunity arises, he's routinely turned it down. It's not a big deal, but now that I've read the book, I'm interested to see the movie (which was supposed to be visually specatcular). Usually books are 'better' than movies. After all, your imagination doesn't have a budget. Though the studio that made Life of Pi the movie is now defunct, I hear this was definately their final blaze of glory. Is it worth a read? Sure! The first 100 pages or so read very much like a coming-of-age story all its own. While they are essential in seeing how the character sees the world.  Does it deserve the acclaim it's gotten? Only because the ending reveals the tenuous connection between 'civiled' man and 'wild' animals. If it had ended any differently, it would just have been a great adventure story, of which there are hundreds.

The Real Dad Rules by Dan Pearce - I originally got this book as a gift to My Sailor once he completed his portion of the adoption paperwork. Well, since that portion is put off until at least the end of the year, I decided to see what Dan has to say. Dan isn't a doctor. He won't overwhelm you with loads of stats and case studies. He is his own case study. A father who adopted with his first wife, has been divorced twice, and started a blog. The blog turned into the world's most popular Dad blog. (Yes, I follow his blog, Single Dad Laughing he provides a lot of real world feelings for Dads. He's relatable, funny, and caring. In reading this book about this dad's journey, I feel like I'm getting a little bit of insight into what fatherhood might have felt like for my own dad. Now, each person's journey is unique, so I know Dan's experience (especially as a single adoptive dad) isn't the same as my dad. But there are certain peices of fatherhood that, as a woman, I've never considered. It's eye opening in that, and I know I'll be quoting him in my own book.

Protecting The Gift by Gavin DeBecker - Written by one of America's leading experts on predicting violent behavior. While I'm not sure what his exact credentials are, I was turned on to this book by a Facebook buddy of mine. While, yes, it's geared toward parenting, there are a lot of universal concepts in this book that can apply to anyone. The gist of the book is about trusting your gut, developing healthy instincts, and listening to yourself. Not in a logical brain way (like talking myself out of the fear of failure), but in the way that keeps you safe - you and your loved ones. For example, have you ever felt anything is "off" about someone, but not been able to actually prove it - only to be proven right later? This book isn't about how to teach your kids to be nice; but it is to teach your kids to be honest and open with their feelings, and teaching people (parents) to follow your gut. It's engaging, even for someone like me who sees parenthood as more of a "maybe" than a "sure thing" every day. (Don't get me wrong - I'd love it to be a 'sure thing'! I'd be heartbroken if My Sailor wasn't entirely on board, but it is what it is - an issue that shouldn't be forced on anyone.)