"All Things Considered, I'm taking this Rather well."

Good news and bad news. They always seem to balance each other out, right?

My Sailor's crazy hours appear to be settling down starting next week! Yeah! We'll actually get more than 2 hours awake together per day! Possibly even a day off together that DOESN'T involve sleeping away 60% of the day in the near future! Yeah! I can't wait to get back to mini road trip adventures and all that jazz.

So what's the bad news?

Though his hours are normalizing - he'll be adding Valentine's Day and another personal holiday to the list of days holidays he's had to work through. He'll be going in around 7am on those days and not returning until the next day.

All things considered though - considering I've just been told in the last 48 hours that our wedding, honeymoon, Valentine's Day, and our own private holiday has been wiped off the calendar, I'm taking it all pretty well. I'm fairly certain most women would have dissolved into tears of disappointment and flop into a bought of hopelessness.

Disappointment?
Oh sure. I can't lie. I may be named after the Bionic Woman, but even she had feelings, and so do I. To some, the answer could be "Just don't throw a wedding" and "Just don't have any expectations". But I don't work that way. Weddings are important - it's important to us to show our family and friends how much their love and support means to us. I expect we'll get to it when we have the time and money. Whatever the season, it'll be fun and beautiful I'm sure. I'm ALWAYS going to dream big, make plans, and do everything I can to set those plans into motion. But I'm also not going to hold it against My Sailor if the Navy decides they need him and causes it to change those plans - or wipe them out completely.

Though the news is still pretty fresh, My Sailor shows no interest in celebrating these holidays sooner or later than the day. Honestly, that DOES kind of suck, but it's also really hard to be interested in ANYTHING at 5am when you're on little sleep, so that might change.

That's Why I Make All My Plans On Things like These - 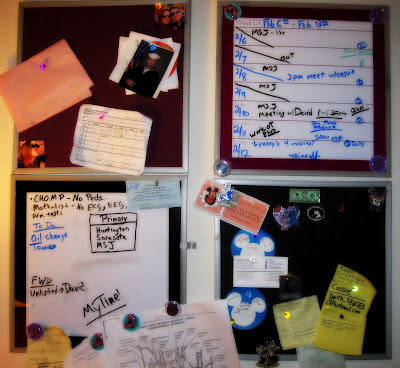 Everything can be moved, erased, redesigned, and saved for later. (Do you love my Mickey post its? I do! Thanks Pam!)

Too bad he has Saturday off and I don't, but My Sailor just got a new video game, so I'm sure he'll keep himself busy with that and catching up on some much needed rest. In fact, I'm almost jealous. Almost...
I'd probably spend the day getting out and then coming home to some crafting or scrap booking or something a bit more tangible, but that's me.

So what am I doing for Valentine's Day? Most likely working - though I'm probably going to order myself some orchids.

After the week I've had, I deserve something pretty.

But what would really start next week off right would be being down just 1 more pound! I'm so close to being securely in Onderland that I can taste it!