But that said, we usually choose to hit up the movie theater or the drive-in (especially with summer movies upon us).

This past week, we saw 2 flicks that were both really great: 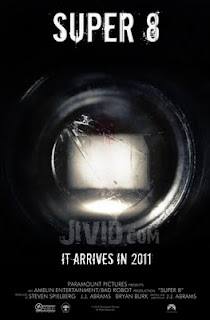 Super 8 was a fun movie, designed for any monster movie lover, or child of the 80's. Somewhere between The Last Starfighter and Goonies, this movie engages monster movie cliches in a highly entertaining way.

My Sailor was impressed by the child actors (and I have to admit, there wasn't a weak link in the cast). I was impressed by the monster. See, ever since Cloverfield was released, nearly all monsters have looked like Cloverfield, or a cross between Cloverfield and Alien. Even the Kraken in the recent Clash of the Titans movie bore a striking resemblance to good ole' Clover. Cloverfield was a fun monster movie as well (once you got over the shakey cam perspective).  But I was thrilled to FINALLY see a creature that is creative take the screen. Maybe it had a touch of District 9's alien's in it, but just a touch.

The other film we saw last night - Green Lantern!  It was awesome.  I'm not familiar with the storyline outside of the movie, but My Sailor is, and he feels that it's pretty much spot on. The characters were engaging and the not-so-subtle messages about the power of fear vs the power of courage made for some interesting dinner conversation afterwards. We saw this one in Real 3D and it was awesome.