Getting Clydas on The Kong 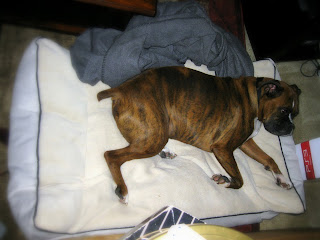 I've been debating the finer points of different styles of dog beds for... well, more than a lot of other owners probably would. I guess I have special worries about my dog for a couple of reasons:

Clydas is entering his 'mid-life'. He's acting more and more like an 'adult dog' now that he's on his way to 7 years old. He still reminds me he's a boxer every day though. Sometimes its in the little bouncy step he does when he's out on his morning walk and just can't wait to see what the day has in store. Sometimes it's in the way he puts his chin on my leg when he wants my attention when I'm working, or brings me his toy and will play with it at my feet while I work just to be in the same room with me. Sometimes it's in his annoying persistance to go for a walk that gets me out of a the house. But he sleeps a lot more now, and is generally less easily excitable, which tells me he's getting older - and so is his body.

Boxers are prone to hip dysplasia. I'm moving my aging dog from a warm, dry climate to a cold, wet climate. He also has short hair, but I'm hopeful that the Tummy Warmer will make up for a good chunk of that. True, I'm removing our daily stair climbing (for the next 6 months anyway).

EVERYTHING is changing. Not only for me, but for my dog. While Clydas and I have moved 4 times in his life, each move takes some adjusting to. One as drastic as this requires some extra TLC (for both me and him). Thankfully, we have My Sailor helping to look out for us, it's still quite a transition for all involved, and a lot of things are changing. To help Clydas keep his bearings (and to help with everyone's sanity), I'm keeping some of the old, and adding the new things as well.


After debating eBay vs. pet stores vs handmade I settled on the qualities that were most important to me:
1) Arrival time.  I wanted something Clydas can get used to while we're still here, so it'll be something he gravitates towards since its his from home.
2) SUPPORT. My dog is 55lbs. If I can put my hand into "orthopedic foam" and feel the ground beneath it, so can his hips - and that's no good. It's gotta be the right combination of support and softness.
3) Snug-ability. He needs something comfortable and most of all warm. But I'm not willing to take the added tumor risk that comes with electric heaters.


4) Appearance. Vain as it seems, some dog beds are really eye-sores. I don't really want a patchwork pillow with dog paws all over it.
5) Durability.  I want this pet bed to LAST. Heck, it would be awesome if future furkids could use this one too!

I settled on a Kong product. If you haven't heard of Kong, they make pretty much chew-proof toys and are most famous for the design of their treat toys. I was a bit skeptical when I saw the bed up on the top rack at the store, but nothing else was living up to my standards. I got someone to help, and she pulled it down for me. I was impressed by the price tag (about 1/2 what I'd intended to spend w/ discounts), and it lived up to the Kong name, so I brought it home to see what Clydas thought of it.

At first, he didn't even step on it, unsure if it was a think for people, but after some encouragement (namely, putting his blanket on it and encourage him to chew on and play with the bed) he realized it was for him.
This video is from tonight:


The critics have it! The Kong Bed is a hit! Check one more thing off the list.