Murph - The Morning After 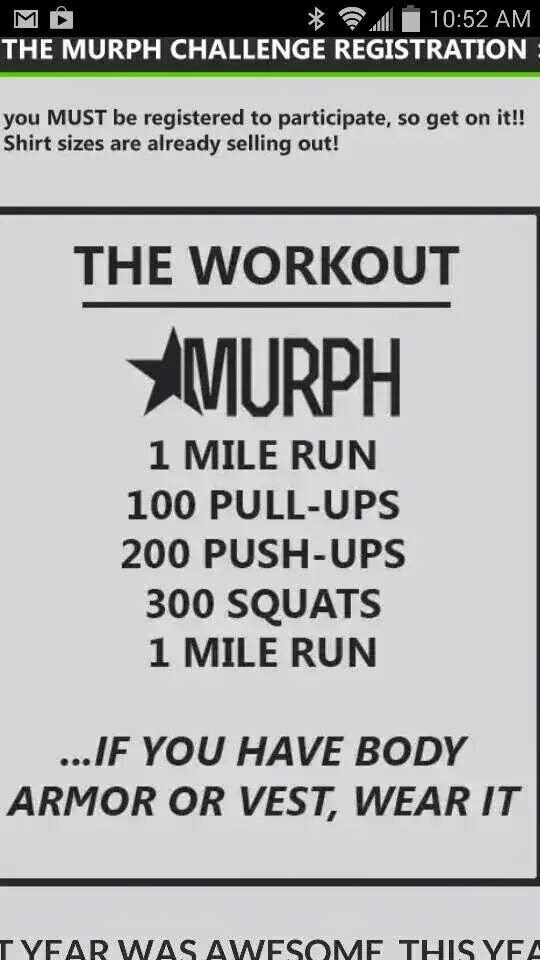 Yesterday, I had the pleasure and distinct oppurtunity to do 'Murph' (the workout seen above) with a great group of athletes.  And yes, I say 'athlete', because anyone who completes this has (IMHO) the intestinal fortitude to be labeled as such. Today, I'm actually not in as dire straights as I was yesterday. I was able to get through my Cleans and Split Jerks, Kettle Bell Swings, heavy squats, and all with just a little added rest in there.

If I haven't mentioned it before, one thing I adore about some fitness communities is that they really bring in people with every single body type known to the human race. Zumba largely attracts women, and Olympic Weight Lifting tends to attract more men than women. But Crossfit seems to attract both women and men, regardless of 'mileage'.

What do I mean by mileage? Well, take a look at this photo of the amazing group of people that finished Murph along side me this weekend:

(Click here to learn why I love Namesake/Hero WODS - and to learn how Kyndall's WOD came about.)
If you look carefully, you'll see military men, moms, women and men in their 20's standing (sweating and crouching) along side women and men old enough to make my parents look young. It's inspiring to see so many people becoming stronger individually, yet supporting each other.

Now, just to remind you, I've been in three Crossfit boxes now. The very first time I stepped foot one was in February for a Throwdown. And the very first time I met the crew from this particular box was today - for Murph. Apparently I know how to make an entrance...

That said, I was a bit of a wall flower during most of the warm up and the first couple heats of athletes. Being in no screaming rush, I signed up for the last heat (since all of the other slots were taken by people who needed to get going and get on with their day).

I knew that meant that I would likely be the final finisher. (Nothing increases the hustle like being last in line!)

That said, the workout calls for 'body armor' or a weight vest to be worn. While I consider myself pretty fit, I wasn't to the point where I was going to wear a weight vest. The weight I carried on Memorial Day wasn't one that you could see during pull ups, push ups, or squats. The weight was my father buried in Point Loma, knowing someone was likely visiting there today. The weight was being away from My Sailor as he slaved away on his Submarine.  The weight was knowing that we had expected to be able to do this together.  Instead, I brought him with me the only way I could... 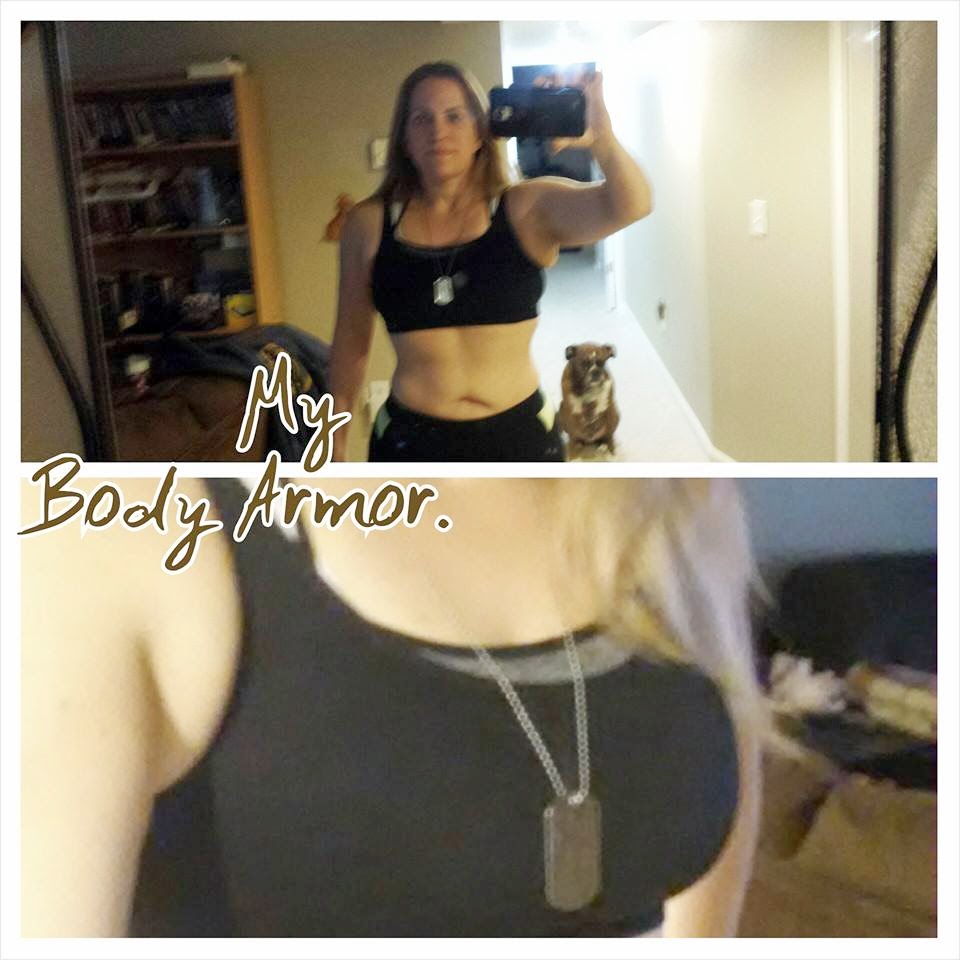 I usually don't wear his tags. I carry him with me in a million different ways that don't usually include Navy branded clothing, bumper stickers, or jewelry. But today, it just felt completely appropriate.

The event opened with a reading of the mission that brought Murph's life to an end, and was followed with a brief prayer.

When the heats got moving, I mingled with a few folks as I stretched and hydrated. One big mistake - I realized I hadn't eaten anything significant all day.  Before the race, I had gotten a lot of water in, a banana, and a pre-workout drink... Now that I was in a later heat than I expected, I wouldn't be eating until after noon most likely. Oops... Luckily, I had some almonds in my car, and got to get a cup of them down before my heat started. In a way, it was lucky that I started later anyway. I was still sore from rocking 190lbs deadlift reps along with Kyndall's WOD on Saturday and Get Up Get Dirty the morning before. Maybe I should have prepped for this with a little more rest? Oh well - too late now! Lesson learned for next time...

The run wasn't so bad. By the time we got to it, I was itching to get underway and join the flock of sweat-ridden focused folks rocking it out. My goal was just to finish in 1 hour or less.  Due to my late start, it was becoming NECESSARY for me to finish within that time. I had a Power lifting friend who needed my help soon after Murph, and I couldn't be late for her.

The mile run started with a big, steep hill. I was one of the first up the hill, but then the rest of my pack overtook me by more than a few strides. It was okay though. I wasn't racing them. While that was a challenging mind set to retain in the moment, I focused on meeting my goals and finishing. Which would mean I needed to pace myself.

The good thing about running UP a steep hill was the blessed DOWNHILL at the end of the run! I made up some time there and stopped my timer as I hit the gym and the 1 mile mark. 7:33. And that was with keeping pacing in mind?! This running thing is really coming along for me.

I went to a corner of the gym and started on my 20 sets of Cindy (5 pull ups, 10 push ups, 15 squats). I opted to scale the pull ups to jumping pull ups to ensure I'd get through them, and I did. Those proved to be conquerable - especially since there were only 5. I kept a pretty strong pace for the first few rounds but... the Push ups...

I had started using Bench push ups, and then finally just threw myself at the floor for the last 2 rounds. Turns out they were easier from the floor. I'd been killing myself using the bench. I should have started on the floor... They were sloppy, but DONE! The squats were totally 'recovery'. Since I've been training in Olympic Lifting heavily, I am very confident in my squats and actually find myself enjoying the quick pace and the relaxing familiar movement.

Finally, I was the last person to leave for the run by 1 set of Cindy.

Distracted by the golfball of barbed wire bouncing about in my lower abdomen, I made a wrong turn on the route and ended up in the wrong cult-a-sac. This didn't really change the run though. I just cut out a cult-a-sac further on the route and called it even on the distance. (The route went through a planned housing development, so everything is pretty standard.) In fact, I attribute the pain to making me run faster. I realized instantly that I had a clear choice. I could sit down, cry, and curl up in a ball on the sidewalk until someone came looking for me, or I could run the (insert-expletive-here) out of it. I decided the only way I was going to be found curled up in a ball on the sidewalk was if I legitimately passed out. Either Endo will own me forever and dictate my limits, or I'll dictate my limits and deal with the pain. Besides, I knew once I was done running, the pain would subside. The sooner I finished, the sooner I'd hurt less. Talk about incentive...

I gave myself a 10 step walk to get through that argument in my head and decide to finish. I was ALMOST done! I couldn't quit now. I repeated to myself "Earn this" a few times and bucked up to finish the run.

Still, I finished the 2nd run in under 8 minutes... 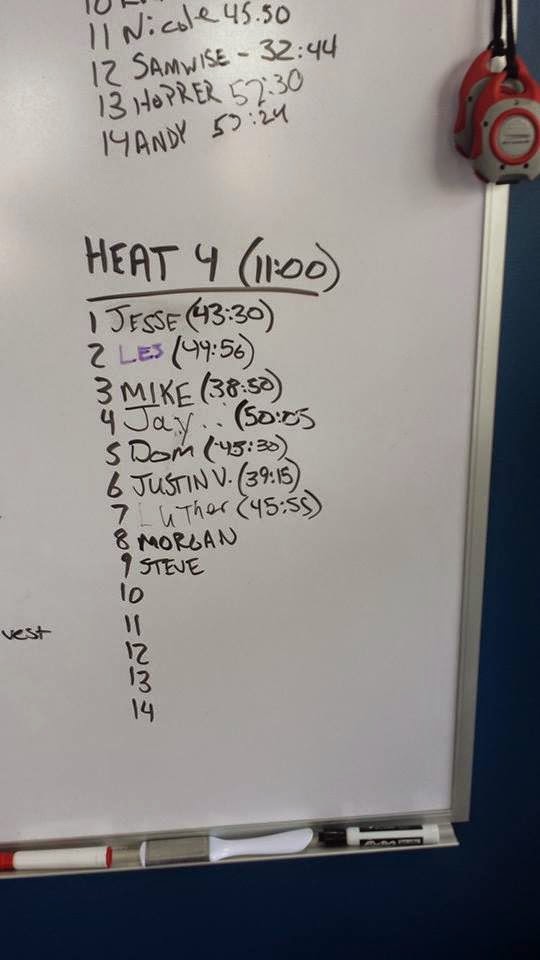 The aftermath? I blew out two small veins in my upper arms from the push ups and I'm really  looking forward to my rest day tomorrow.

Thank you, Murph, and Crossfit Narrows, for making this Submariner's Wife stronger.
Posted by -J.D. Humenay at 1:26 PM