Expedition Everest Part 2 - GET A CLUE!

So if you're wondering what the clues during Everest were like, here's the low-down on the clues, and how I figured them out. (Some of my answers came from an unconventional place, but were correct none the less!)

After finishing the 5k, and meeting my goal of setting a new personal record, the scavenger hunt was considered a "bonus". (A 'bonus' that included sprinting an additional two miles.) Special thanks to the YetiGirls for the great photos! My clues were pretty much ruined by the weather.

This was where I was a bit stuck. The "item I was given" with this clue was a blue marker and a blue travel light. Of course, I thought they meant 'blue'. But then I was stuck! I knew Disney's Animal Kingdom like the back of my hand, and I've never  heard of the Palm Courtyard. I ended up following the crowd. Apparently it's the 'official' name for the entry plaza to the parks.

So I bounced up to my station, found the clue-giver and proudly called out "Blue!"

And I was flabbergasted...

I begged for an additional clue and got one. "What color are the trees here?"
Answer? Green. Apparently this (poorly written) clue is based on the flags on the bibs (which you can't see, because you're wearing them...).

So I answered, got Clue #2, and sprinted along to my next station, reading the clue as best I could along the way.

This one was another one I stumbled over... The text beside the green flag reads: "Strength: The mental and physical ability that both reenergizes you and helps you get the task done." You'll notice there are no references to numbers in that... So I saw someone checking out their bib and looked at mine.

Beside the green flag on my bib was the year: 2014. Figuring this must be what the meant, I added the numbers together (2+0+1+4=7). I bounced up to the clue giver, confident and threw out my answer: Seven!

Completely lost, I looked at the text on Strength again.  Ignoring the parts of the clue that didn't make sense to me (at the time), I noticed that this was the only description that included references to more than 1 attribute. I honed in on those attributes and the word "both", which indicated 2. So I did some quick (desperate) math. Mental (1)+ Physical (1)+ Both (2)= 4. What was the worst thing they could say, right?

Well, I was right! My unconventional logic (or sheer luck) worked! I gained Clue #3 and dashed off to the next check point.

This clue made me insanely happy. I solved it in about 3 minutes flat. I write - a lot. I'm a word junky.  I love word puzzles. Confidence renewed, I turned in my answer, got clue #4 and zoomed off.


Lucky for me, Clue #3 was a pivotal one. Since I solved that one correctly (and quickly), I was able to zoom through to Clue #4 and punch out the items that matched my answer to #3.
Then I was off to the 5th and final clue. On cloud 9, I was zooming through the tail end, finally gaining some confidence.
Holding my punched out card over Clue #5 gave me the directions for the final piece of the puzzle.


By this time, it was time to dash towards the finish line. Singing to myself all the way, I confidently sprinted the last half mile into the finish line. All I could think was, "I'm gonna get my compass!" 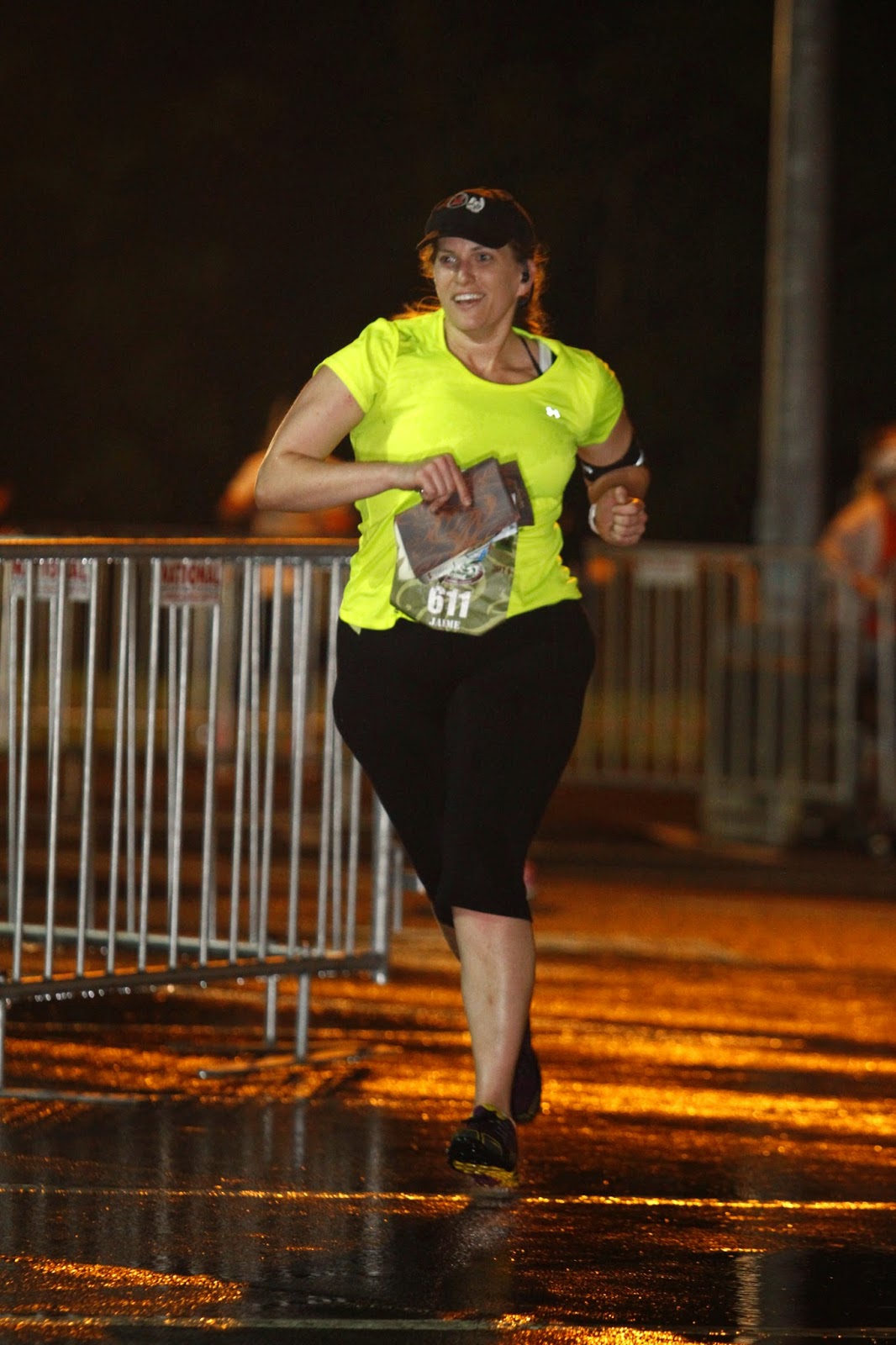 A team of four women were ahead of me, arguing with a final judge over the answer to the clue. How they got that far with the wrong answer to #2, I'll never know. A judge saw me coming and asked (yelled), "What's the answer?"

I held up four fingers.

She smiled with obvious relief, moved aside (before I even got to her) and said, "Proceed to the finish line!"

I was thrilled. The four girls ahead of me weren't.  They quickly looked over their shoulder, but I'd already dropped my fingers. Back to arguing and reviewing the clues they went - and on I went to the finish line.

I crossed the line and graciously accepted my medal from one of the voulenteers. Catching my breath, I walked through the tables of post-race goodies. They were packed with mini Cliff bars, Powerades, bananas, and water bottles. I grabbed 2 bananas, 2 mini cliff bars (to give to The Nurse, who was nowhere to be found just yet) and 2 bottles of water. She'd waited for HOURS in the rain with no shelter and little to no seating. She deserved whatever I could offer.

I stopped for a finishing photo as things slowly started to sink in... 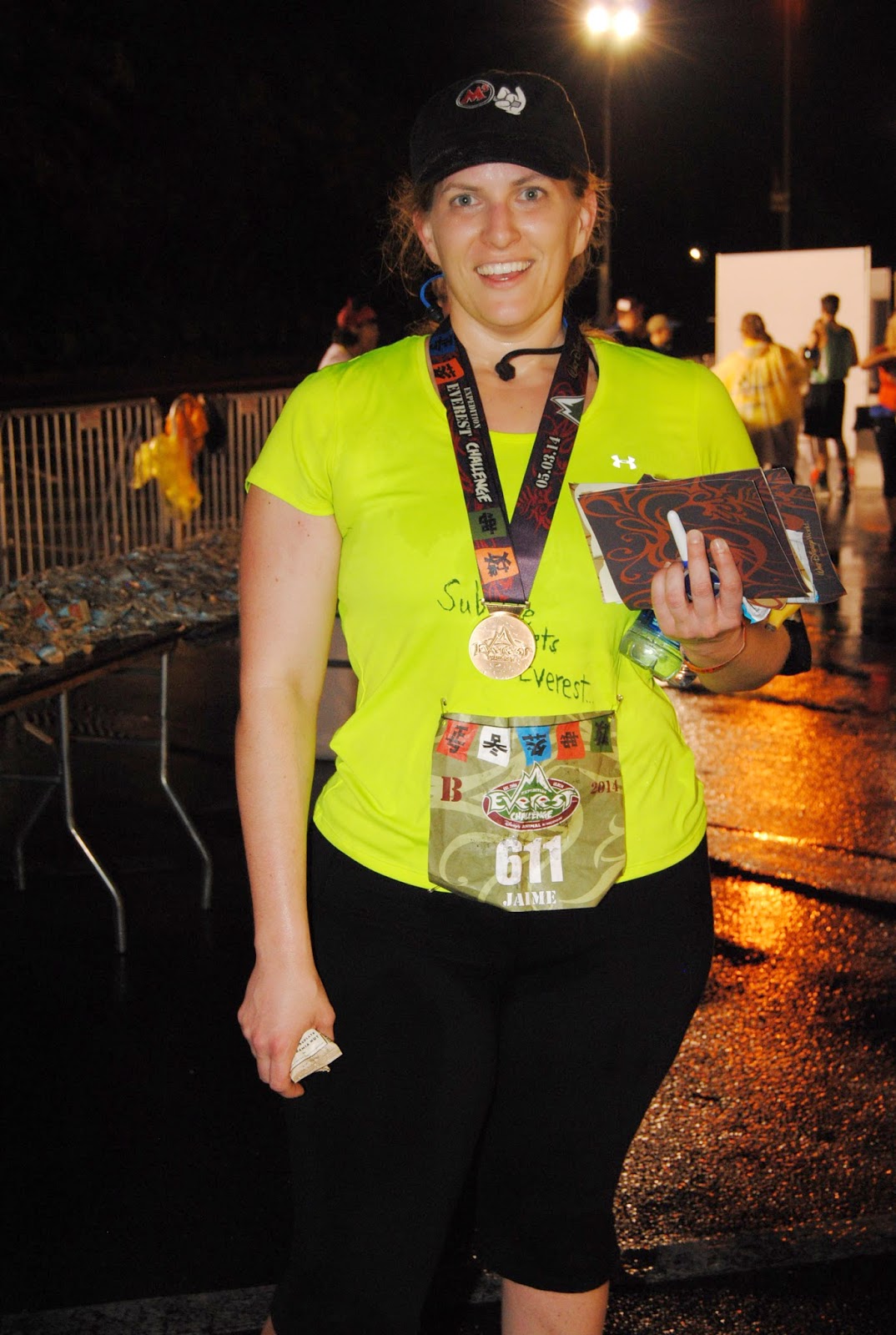 I walked into the surprisingly sparsely populated night, scanning the small crowd of spectators for TheNurse. She was nowhere to be seen and as I walked ahead, everything started to hit me.

Now, I consider myself a pretty damn good choice for a Submariner's wife. I can handle the long distance, the long silences, the one-way emails, and the crazy schedules with the best of them. (And, of course, it helps that My Sailor makes it completely worth it all the time.)  Most of the time, I find joy in 'flying solo', but sometimes, it hits me like a ton of bricks.

This was one of those moments.

It was just a 5k. I've run a few before without My Sailor. But all I could think about was how he should have been here. How much he would have loved the race. How much he would have loved having this medal. How much his full support behind me means to me. How badly I ached to hug him and celebrate this 'win', and the others he'd missed out on, from My First Crossfit Throwdown, to other prs and goals reached...  Child Overcome by unexpected emotion, I pulled off to the side and crouched for a moment as quiet, wracking sobs got the best of me for a few minutes.

I gathered myself, stood.

It proved to be good timing. I was wiping my face as TheNurse approached for a big sweaty hug. We chit chatted and headed into the real main event - the afterparty! 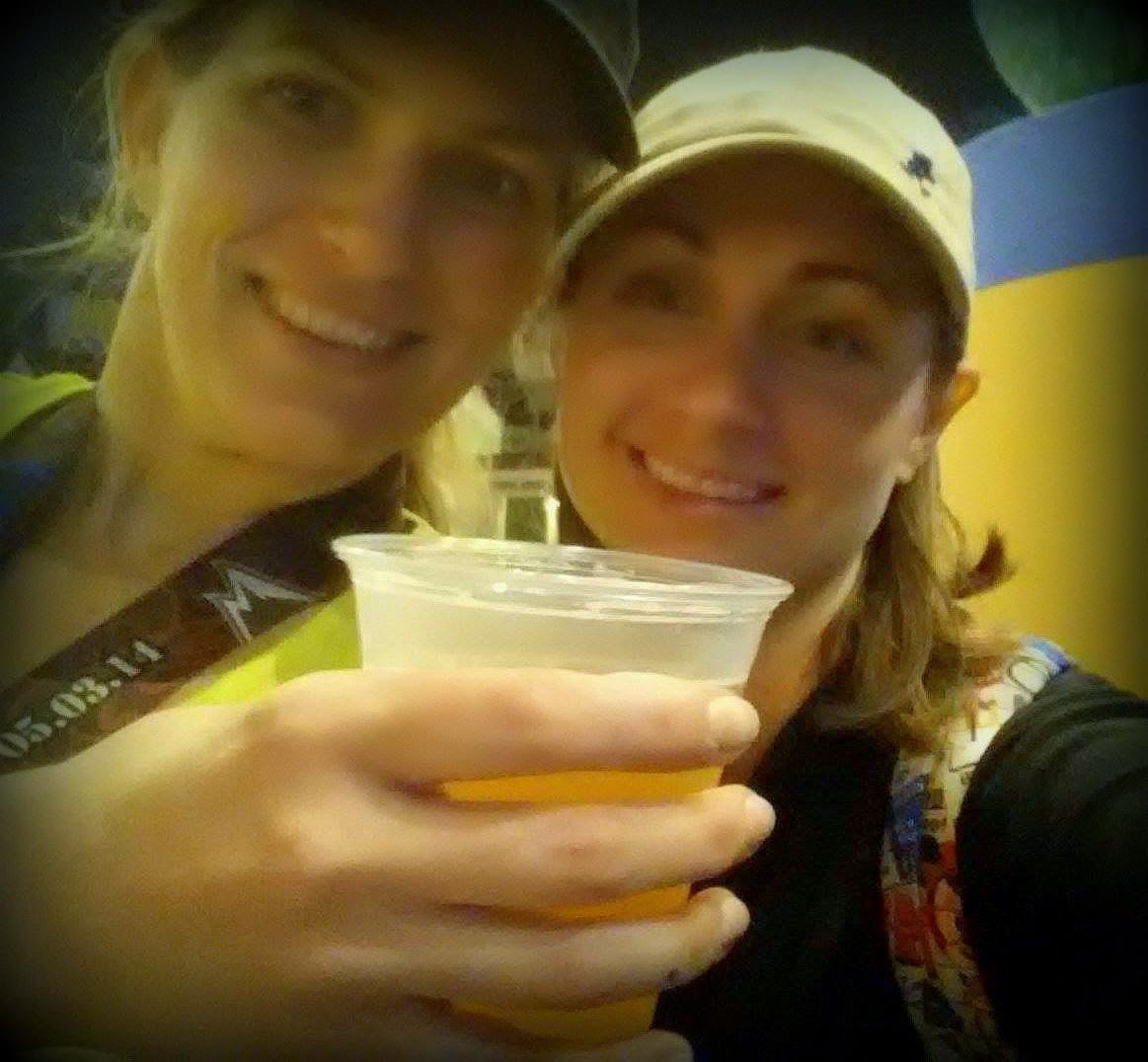 Because I'd been in an early wave, the park was nearly empty, which was fantastic. I had heard mixed reviews about the party. I had heard that it was crowded and not worth the money.  I felt otherwise. We had a great time. In fact, it was definitely a high point from the trip.

About 15-20 minutes into the party, I got my first taste of real potassium deficiency. My calves started to seize up. Luckily, I came prepared. I pounded down both bananas, and a large can of coconut water. That really helped, and after two rounds on a crazy mouse roller coaster, we stopped off and TheNurse bought me a beer. Sure, I'm grain free, but every once in a while I make an exception to enjoy a cold one. Tonight, I earned it.
Afterwards, we were able to ride Everest TWICE at night! It was a real treat considering it's rare that this park is even open after dark. 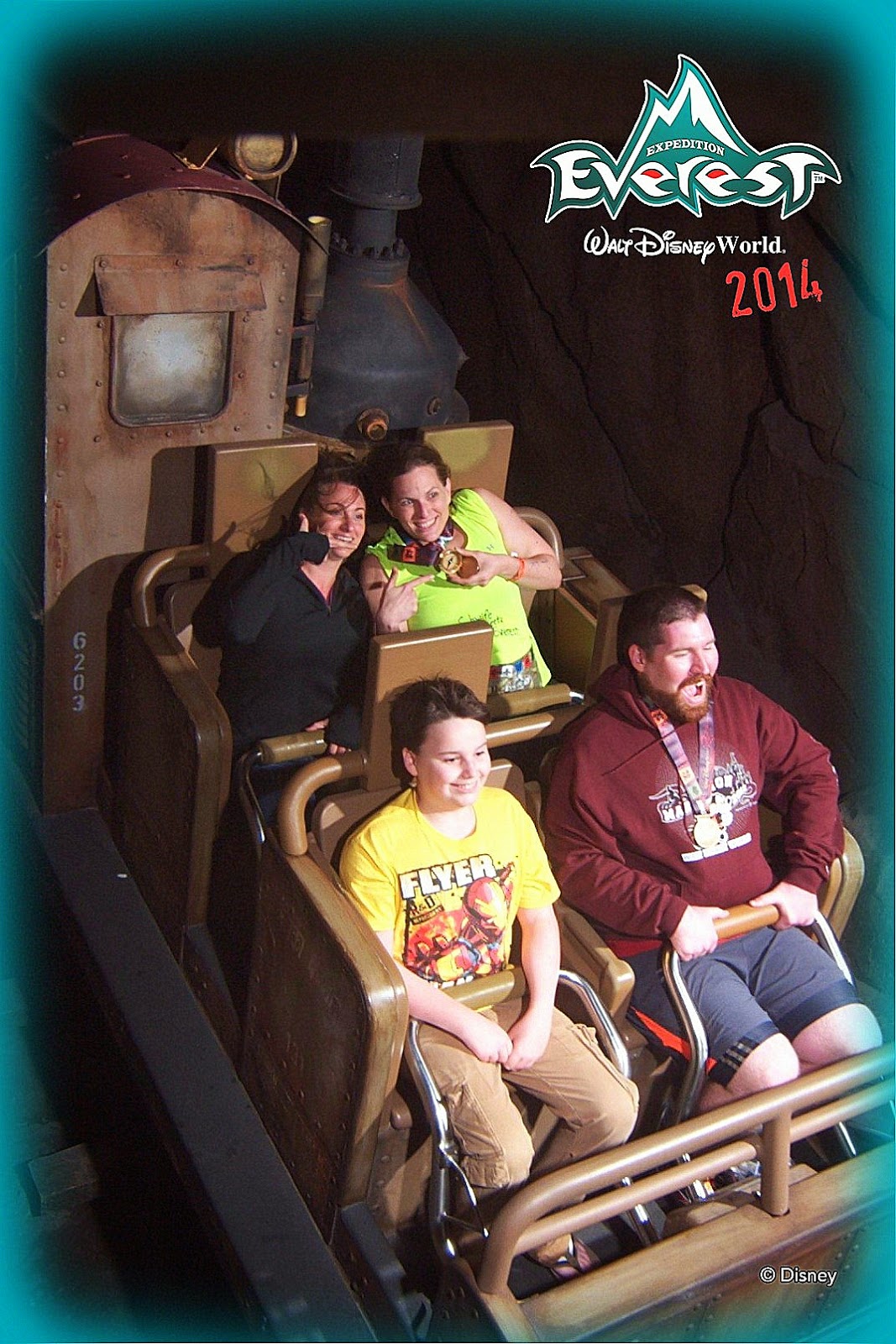 We capped the evening off with a BLT salad and a slow walk back to the car after catching the awards ceremony (the first 3 finishers in Men's individuals, Women's individuals, and Teams got special trophies in addition to the medals) and called it a night. 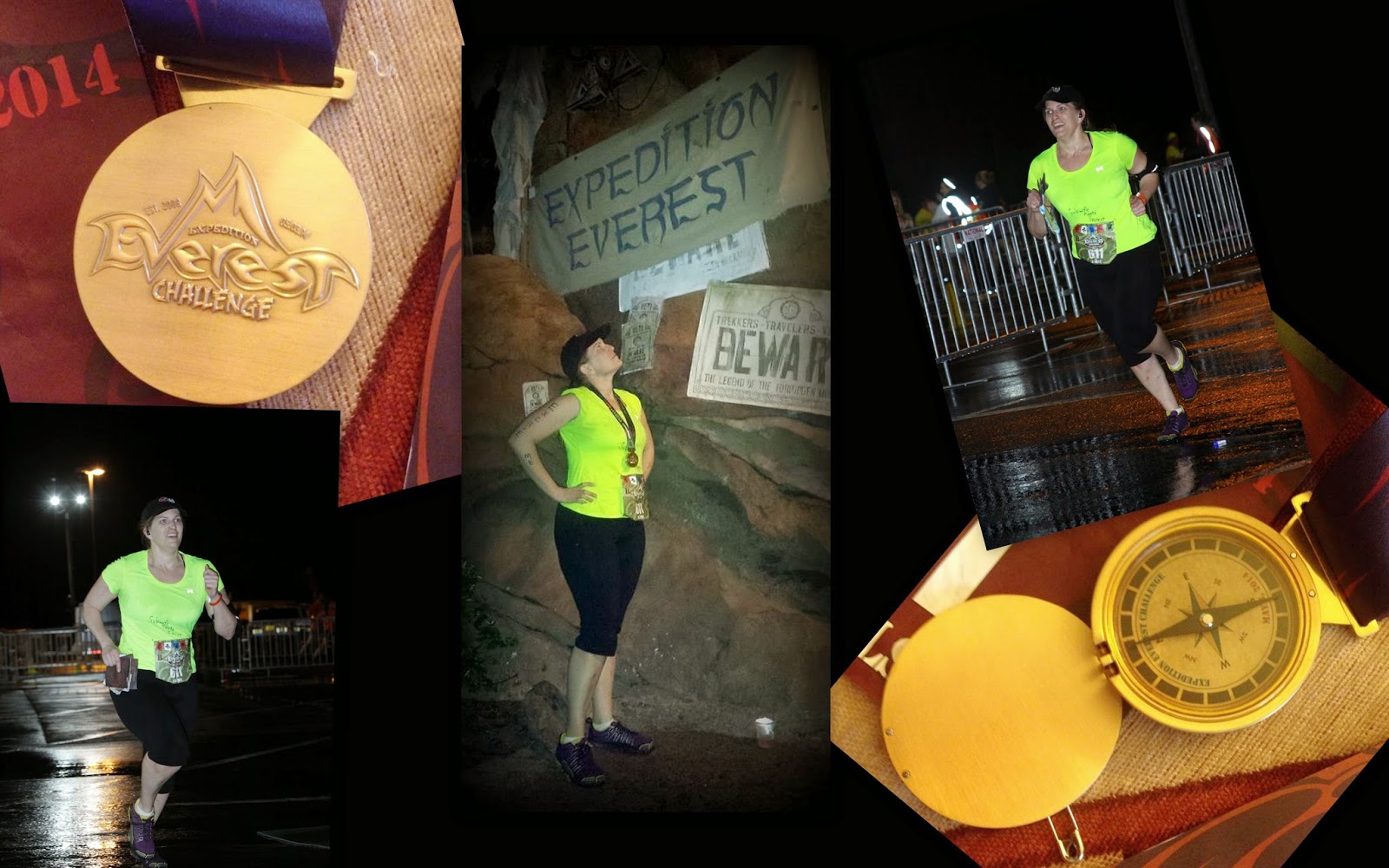 I'm very happy with having finished - and even happier to have one of the coolest medals in RunDisney history... and to have earned every ounce of it.