This weekend, I had the marvelous experience of going to the Northwest Crossfit Regionals.

There are so many things I love about this event. In case you're just tuning into the blog, I competed in My First Crossfit Throwdown in February (click here to check out the blog post about that event), not long after My Sailor left for deployment.  It was actually my very first time walking into a Crossfit box, and it was incredibly intimidating.  Honestly, Crossfit Boxes are still pretty intimidating in appearance. They seem to have more in common with a horror movie than a conventional gym.  Usually, they are huge rooms with no mirrors or machines (other than a rower), and lots of ropes, bars, bumper weights, kettle bells reaching incredible heights (er... weights), boxes to jump on, giant rubber bands, and other instruments that might as well just be for torture.

When I did that Throwdown, my double unders looked like this:


As I mentioned in that blog, I just didn't have them yet.
Now? They are still a work in progress, but they look like this:

...Which is a far cry from February's attempts. (Don't worry about the dialogue. I'd whipped myself bloody with the rope earlier in the day, and suddenly had the bright idea to try double unders barefoot. The added incentive NOT to whip my feet proved to be just what I needed to get more in this 28 seconds than I did in the entire 2 minutes of the last event of the Throwdown.)
One goal I'm considering is doing the Crossfit Open workouts next year. It's on the table, but since the work outs won't come out until next spring, I'm perfectly happy to let that sit on the horizon for now and keep up with more immediate training, while keeping my conditioning up.

All that said, this isn't intended to be another progress blog.  Today I was reminded that my state of mind has changed a LOT from when I started. Going to the Crossfit Regional games really made me smile this weekend. Watching these talented, hard working athletes accomplish feats of strength, endurance, and passion was inspiring to say the least. But I won't lie- I got on the comparison band wagon. 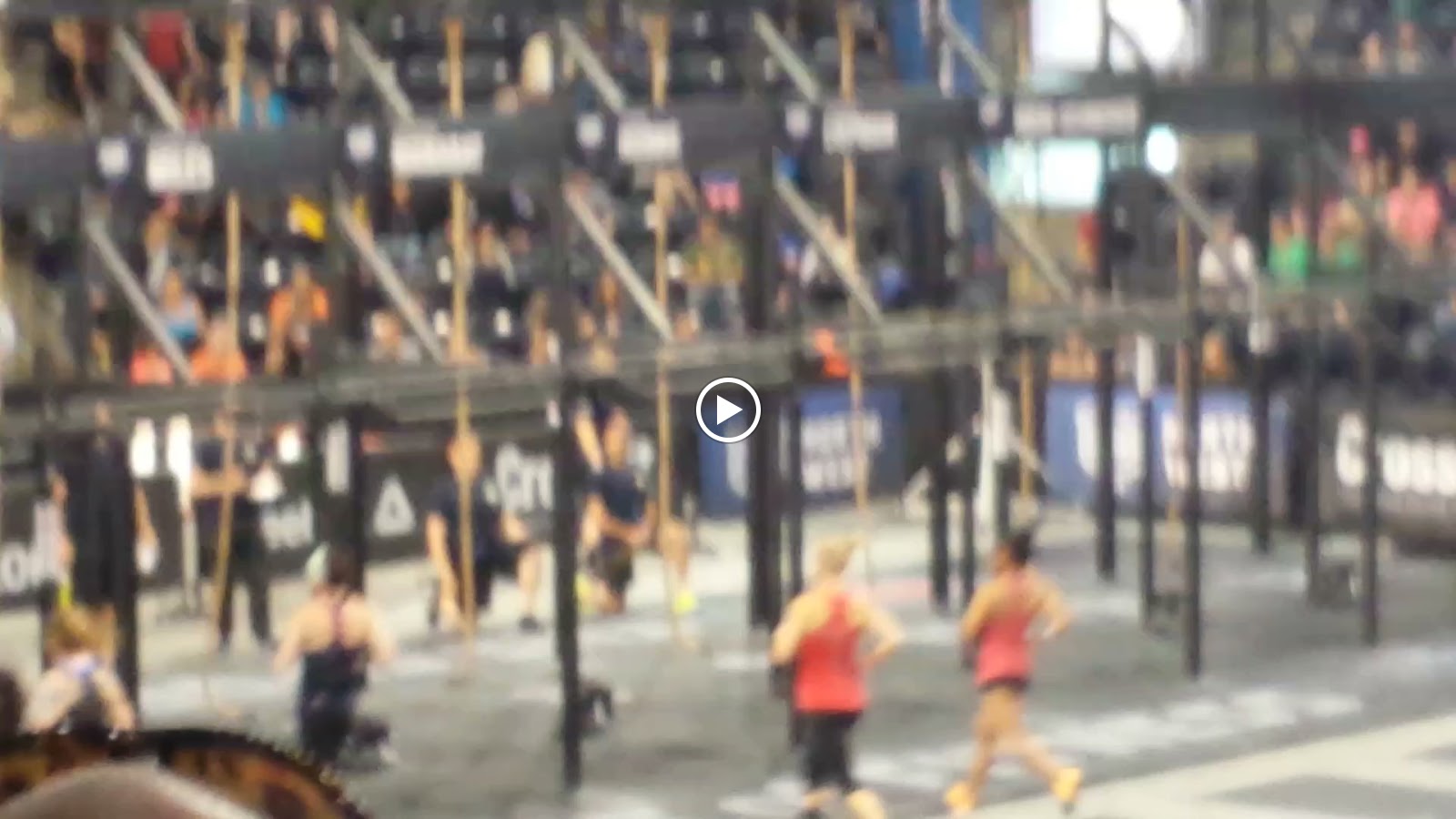 I remember one woman finishing a particularly brutal event (64 pull ups and 135lb overhead squats x8 with a 6 minute time cap). She was the third or fourth woman in her heat to finish the pull ups, but there was something about the way she walked up to the bar and her build that made me turn to The Lady in Grey (one of my Games companions) and say, "She's going to knock this out. She's a lifter." And I wasn't wrong. She made it look easy. (I can ALMOST clean 135lbs from the floor - I'm about 10lbs away from that being my max, but locking it over my head and squatting after 64 pull ups plus the other events of the day?! That's nearly mythical.)

Today, I looked in the mirror and the gym as I pulled 105lbs off the rack and into my shoulders.

I was reminded of that particularly strong female athlete - the set of her shoulders and her hips, the way she moved as she walked... she wasn't one of the smaller girls, but that didn't mean she was any less competition for them.  She was (and is) a powerhouse.

It almost came as a shock to look in the mirror and see similar features in my own body. Being in this skin still surprises me all the time. But it's the changes in my brain that have been nearly as pronounced.

See, about a year or so ago, I would have been filled with, "I can't do that!" thoughts as I watched them swing through the pull ups, push through the squats, and battle with the box jumps. Now? Now I watched them closely to see what techniques they were using and what I could learn from them.  I looked for ways I might be similar to them. Yes, there were those tiny women who flew through the gymnastic bits (like rope climbs and such), but there were also the strong women who made lifting their event.  All were well rounded - no doubt, but in those bigger lifting women, I saw a bit of myself.

Now, this doesn't mean I'm taking aim at Regionals next year. The Open? Perhaps. Regionals?! That's a bar that's still a little high for me, but it was great to go and watch and I'll definitely be in the crowd again if I can manage it.

That said, I have my own competition breathing down my neck. I was hoping My Sailor would be able to cheer me on in person, but I'm still not sure if that's possible. This deployment has been especially rough on him, and (though I could face this alone as it's really a strength vs body weight competition) I've rallied the troops.

No one is an island.  I didn't have a ton of support for fitness and weight loss and all that when I started. I've always had his, and I count myself lucky for that, but I know well what it's like NOT to have that support as well. On a liquid diet, I had gotten down the 170lbs, gained some confidence, and my (now ex) husband felt that he wasn't needed anymore and looked elsewhere to find someone who needed him. Now, realizing I wasn't the love of his life and it was time for him to move on was probably one of the best  gifts he'd ever given me. Facing that fear (and that freedom) caused me to rebuild from the ground up. The BEST thing about ground zero is that you can rebuild. So I rebuilt into a more independent woman that didn't 'need' anyone, and it turned out I have this wonderful guy in my life that believes the same things I do about love and life Things like: Enable the dreams of someone you love, and never be afraid of a little adventure - or a big one.   It's taken me 2 years living in Washington to really have (what I would consider) a strong support system. That support system (largely forged at the gym) has been a great boon to me. They've really stepped up, whether My Sailor is here or not.

I'll take that as just another sign that I'm on the right path.
Posted by -J.D. Humenay at 1:13 AM