'Mr. Darling' Kind Of Hates It

My Sailor is a good sport about just about everything.
I mean, everything.

Folks, I really scored and I'm keepin' him.

Though the Navy keeps him away, when he's home, he contributes without being asked. When he's not home, he actually trusts me (which appearantly is a HUGE thing, if Navy wives facebook groups are to be believed - though it's always come naturally for us). He's always supportive of my endevours, even when they include going to the Pacific Northwest Mouse Meet at a moment's notice, driving over 40 hours in 2 days to sing at a friend's wedding in Yosemite, or working on articles and storylines into the wee hours of the morning. While he doesn't always know what to do with me when I get super emotional -  that it doesn't happen very often. (Well, giddy happens and he knows how to handle that. Weepy doesn't happen often - lucky guy!) He MORE than makes up for any short comings though. He teaches me a lot about what it means to really be considerate. I've been so used to living on my own that I can a bit myopic at times. He puts up with (and actually partakes) my Disney-itis, my Type-A moments, my live theater fetish, and the insanity that is the body's failing reproductive system (believe it or not, guys have broken up with me for just that last reason alone).
So when there is something he isn't keen on, I take it pretty seriously.

He HATES  being called "Mr. Darling". It's happened a few times (by well-meaning people in the hospitatlity industry) and it's like an instant trip to grumpy town.

And in this case, I can't blame him one bit.

In case you haven't been following my blog since the begining, Darling isn't my last name anymore. It was legitimately my last name. It was on my license, bank accounts, and and every other legal peice of paper everywhere until about August of last year. Once we threw our wedding, I agreed to change my last name on every scrap of paper I could.

It's harder than it sounds.

I mean, if I were really young, I'm sure it would be no big deal. In fact, it would probably be fun and exciting. I'd probably have a drivers license, a credit card, and a bank account to change my name on and proudly proclaim my marital status. Instead, I have cars (registrations for 2 cars), insurance (homeowners and drivers), professional licenses (I'm a CPC by trade), a few credit cards, supermarket rewards cards, a driver's license, my military ID, Mortgage, YMCA membership, and 3 bank accounts. It's more of a nauscence.

I've been published for over 10 years as J. Darling in magazines, digital forums, and it's been my stage name as well. Cute, easy, memorable, and WAY easier for people to pronounce and spell than my madien last name (Munderloh) and my married last name (which is a lateral move from Munderloh - trust me).

In this day and age, you can't just call people and say, "Hey! Guess what! I changed my name! Can you fix it for me? Thanks!" You have to fax over a copy of the divorce decree and then a copy of the marriage license... and often times there is a fee involved (because apparently it would be criminal for someone not to make money off another person's life change). Nearly all of those require "proof" to change names.

Now, I've held true to my promise. I just haven't gotten to every scrap of paper. The least important accounts just seem to sit there. It doesn't really dawn on me that I have more work to do until we're standing at the store and the clerk says, "Thank you, Mr. Darling. You saved insert-pittance-here."

My husband is NOT Mr. Darling. My ex husband is Mr. Darling. Why did I keep the last name? Ease mostly, but for me, it's also symbolic. Munderloh was a little girl, pretty insecure, unsure of her value or place in the world. Darling grew into a woman. So where does that leave me now?

Balanced. I now have great coping mechanisms, open to learning from everyone I meet. It's good place to be, no matter what the last name. 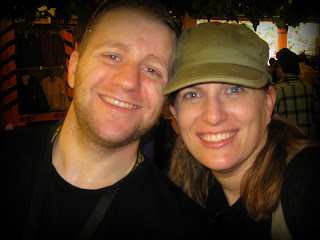