I'm a pretty lucky girl. My Sailor is a pretty awesome guy. Not only did he throw a cookout full of Clean Eating goodies (grilled veggies and meats w/o sauces and things to weigh them down), but he did an incredible job cleaning the house for the gathering. I end up with amazing left overs, a clean house, and one more added surprise - 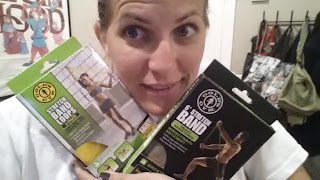 Bands! I had mentioned how I was going to order some resistance bands next paycheck, but My Sailor didn't want me to wait. He picked some up for me as a surprise. I haven't opened them up yet, but I will be playing with them this week.

He's also being understanding of the clean eating month we're doing. Well, I'm doing.  He'll abide by it at home. Whatever he eats at work, he eats at work. As long as he doesn't bring it home, we're all good. It's day 3 and I can already tell you I miss bread a lot more than I expected! Thankfully, a friend has already turned me on to Paleo toaster bread. I'm looking forward to getting another order from the Julian Bakery.  I had reviewed their low carb toaster bread a few years ago and now that I know they make a Paleo friendly toaster bread, COUNT ME IN! I'm sure it'll pass in a few days. I didn't eat a lot of bread before, so I don't understand why it's not on my brain, but it'll fade, I'm sure.

I'm also trying out the MapMyRun app. I tried it back in 2007ish, when I lived more rural than I do now. It was annoying then (before the readily available smart phone), so I gave up on it, but I'm loving the flexibility of it now.

So all that said, the training program I'm doing for the PowerLifting Competition is, so far, dare I say, enjoyable - in a love/hate relationship sort of way. I still hate the first set, but I'm getting my form right down to the finest detail - and I mean finest detail. Last session, Trainer Guy took a video of my feet to show me how my heel was just about 1/4th of an inch off the ground. Oh what a difference 1/4 of an inch makes as the weights get heavier! I'm pretty excited to see when I end up back squatting over 200lbs. It's no longer really an if. It's a when. Which is kinda cool.

I get asked fairly often how I 'reward' myself for the tough workouts. Do I go out and grab a candy bar? Do I schedule regular massages?

Well - no. Neither. See, I don't want to ruin all my hard work with junk food, and paying people to rub my body just has never been terribly relaxing for me. I usually end up concentrating so hard on trying to relax that I sort of miss the whole 'relaxation' concept. I wasn't abused or anything as a child, I just kinda like my space. Touching another human being is a privledge, in my book, and paying someone to do that is just a bit weird for me - though I love the heat from a hot stone every now and then.

My rewards are pretty simple.


I drink a coconut water product (Zico Dark Chocolate is delicious, but lately I've been leaning away from the sugary stuff and more towards straight up plain coconut water - not because it tastes good. It doesn't, unless you like the taste of liquified wood) for the massive amounts of potassium to keep me from getting painfully stiff. I also keep a Body Shop Body Scrub in the shower that I ONLY allow myself to use post work-out. I have a few other lotions (Body Shop Coconut Body Butter and Seaweed Matte face creme) that I only allow myself after a post-work-out shower.
But do I have any huge rewards (like a cruise or a trip or an expensive peice of whatever) in mind when I reach my 'goal'?
Not really.  I mean, my short term goals have their own rewards. It's cliche, but it's true.
Here are a few examples:
GOAL: Get through each workout with Trainer Guy without passing out, throwing up, or quitting.
REWARD: Not passing out, throwing up, or quitting!

GOAL: Train with Trainer Guy for 1 year.
REWARD:  The body and fitness that come with training hard for a year!

GOAL: Back Squat over 200lbs, Hit the 100's in all other lifts
REWARD:  The body and fitness that comes with reaching those goals!

I guess I'm hooked. The reward is the reward I get for doing the work.
Go figure.

That said, I've been told often lately that I'm "inspirational". That's a really big word  that I never dreamed would be associated with me. Now that it has come up, it actually gave me a blogging block for a few days. (That's a lifetime to a blogger.) It was as if I have this 'pressure' now of coming up with something clever, witty, and profound that would surpass race, gender, occupation, creed, etc...

Instead, I decided that you, dear readers (ye brave, ye few) will get what you always gotten from this blog. A healthy dose of me, where ever I'm at.

I'm actually really excited to see my story, this little blog, touches people on around the world. Turns out I have nearly as many readers in China and around the world as I do here in the US of A, which is amazing, interesting, and a little bit scary at the same time. For a writer, it's down right exhilerating.

Which brings me to the other 'news.'

My adoption story has been printed officially in Parents Ink - a new online magazine! It's neat to see it in print, even if there are some formatting glitches they are working on.

However, our adoption has been pushed off yet again, for at least another year. This time, it's not due to scheduling so much as we've opted to refinance the house and extend the loft on the 2nd floor to a true 'second floor' master suite. We'll be interviewing roommates for 6-12 month contracts (must love dogs). Now, I don't mind being a family of 2 a bit longer. I kinda like things just the 2 of us, and we haven't had much time for that (though having a new roommate doesn't exactly lend itself towards that either).

Part of me also believes that My Sailor just isn't ready yet.

See- he really wanted that cookout on Monday and really wanted to make sure I could have a good time, rather than worry about anything. He worked really heard to make that happen because he really wanted it. I didn't have to ask him to do a thing. He also REALLY wants a PS4, so he put a deposit down on it and has been hauling away his money for it. He's got a buyer for his Magic cards and it's pretty much all he talks about. He really wants it. His actions show it. No encouragement or guidance needed. He waited 13 years for me and worked hard to be the kind of partner I needed/wanted because he really wanted to be with me. I didn't say, "If you do XYZ, we can be together." He just did them on his own.

I've been ready to adopt for nearly 10 years, but I've always needed the right partner. Now I have the right partner, but he's still sorting through some things on his own. And I respect that. His process has got to be VERY different from mine. After all, 2 of his siblings have biological kids. Why can't he, right? I can understand how that must feel horribly unfair to him. It's not like that for me because, well, I never had bio siblings around. My brother doesn't have kids, and even if he did, I'm adopted, so it's a concept I'm intimately aquinted with on a level that a non-adoptee just, well, isn't.

The last situation I'd ever want to bring a child into is one where Dad wasn't sure that he was ready for it to begin with. And, with My Sailor's decision not to re-enlist when his contract is up in 2 1/2 years, our financial future is a bit extra hazy right now. It may mean that I continue to work full time at a desk job where I can get benefits for us, where I expected to be cutting back on the 'day job' in about a 1.5 years.

So, yes, I'm dissapointed. I'd rather start our family than have a jacuzzi hot tub in my bathroom. But sometimes it's the detours in life that have the best views. After all, I wouldn't be here if it wasn't for a few huge unforseeables. I'll let myself be disappointed for a little bit, because that's the honest thing to do, but moping? No thanks.

Looking ahead is so much better than looking back, even if I'm not sure where the road leads.