It's hard to believe it's already Tuesday. This great weekend just flew! Here's a quick run down -

Friday night, we had planned on seeing Dark Knight Rises, but when My Sailor got home, he wasn't feeling up to par (exhaustion kicking in - a constant companion in the military world). So instead, he stayed home and had some much needed rest. I went out to see the opening night of a local production of Dog Sees God. 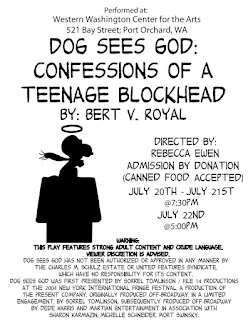 The show was great. I've heard a lot about it. It won several awards throughout it's off-Broadway runs in 2004 and 2006. Dog Sees God warms the crowd up with a few laughs. It starts out with "CB" writing a letter to his Pen Pal about how his dog got rabies, killed it's little yellow bird friend, and died. Fans of the Peanuts will recognize the characters as they appear in their more troubled teenage years. But it ends with gasps and tears, unwaiveringly depicting the fallout of  probably the most relevant topics to have gained media attention over the past 3-5 years - Teen Sucide and Bullying.

The price of admission? A donation of canned food. As for me, I dropped $5 in the donation box and got more than my money's worth. (And I'm not just saying that because I know the director, set designer, and several of the actor's personally. It was incredibly moving.)

On that topic - I don't think this is limited to the bullying of gay and lesbian students, but rather speaks to anyone who has ever felt their life was so painful that giving it up was the only way out. I could identify with it on a deep level. After all (if you've read by blog for a few years, ye brave, ye few, steadfast followers), by the time I was in 6th Grade I had 3 different plans and the only thing that kept me from carrying them out to completion was that it would make my parents (who had invested so much in me) sad. I couldn't do that to them, not 'I couldn't do end myself.' That's pretty twisted thinking -  right? Thankfully, by the time I was solidly in my teens, my life and circumstances had changed. The hell that was my grade/middle school experience evolved into a broader (bigger) high school experience. In that sea of people, I could escape the boy who taught me what heart break was. No one knew I was the product of a rape (or so I was lead to believe until I was 19, but that's another story) and I could simply avoid the bullies who threw rocks at me and called me name for 9 years (k-8th - same small school, same small minded kids), and the small clique of girls who didn't know what to do with me. There was a place for creative souls that, quite honestly, my church up bringing didn't understand. I was encouraged by being part of Drama Club and taking the stage. Being in showchoirs helped me find my smile again. Oh, High School wasn't a social cake walk either, but I could breathe easier. By the time most kids were just starting to hit the road bumps I'd faced as a grade/middle schooler, I'd decided to start sharing my experience. After all, I figured I must be here for a reason if I was still alive, and I learned

So this show hit me on a very personal level. It's a brave little show I hope more people take the time to share with their families, despite the lanuage, sexual, and drug references.

Anyway, I digress.. back to the weekend!

Saturday was delightfully busy. We did some chorse, I hit my Zumba class, and then we met up with some friends of some beer and wine tasting. We scored a delicious bottle of one of the best Malbecs I have every tasted at Rolling Bay Winery - a local winery in Bainbridge Island. It's not available yet, but knowing that we'll be gone when it is, the winemaker was kind enough to sell us a SIGNED, UNLABELED bottle! We can't wait to share it with my California vinaculture friends! (It's REALLY hard not to open it for a taste!)

We also saw Dark Knight Rises, which was really good (though ran a little long at nearly 3 hours).

Sunday, we slept in, did some chores, and relaxed until it was time to get ready to go see RENT! Sean had never seen it before and it was really great to get all dolled up and head into the city! We had a good time at yet another important show. Even though AIDS is no longer the death sentence it was when it first came on the scene, it still is an important show in understanding the fear and devastation in the arts community. The year RENT was written, nearly 49% of the people diagnosed w/ AIDS lived less than a year. Nearly 50,000 deaths in a year from it... Pretty scary stuff! Previous shows have emphasized the relationships rather than the AIDS aspect of the show, but this one was an interesting blend of the contemporary (movie) version and the original script. The energy was fantastic, and aside from a few Mic issues, it was a great show.

We won't be going out again until the wedding now, so it was great to go out with a bang!

I'm really looking forward to next weekend too. We'll be getting LOTS of housework and yard work done in prep for leaving for California on August 7th!
Posted by -J.D. Humenay at 8:55 AM