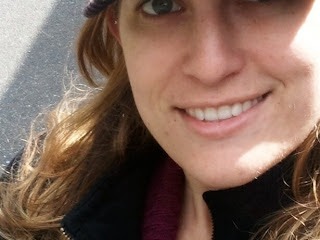 So it's finally starting to feel more and more like home, even though this is the first official weekend here.
It's been an eventful week in many ways. I got back to work and FINALLY got over my cold. On another front, I ventured out to try some chinese food - And ended up sick as a dog for about 2 days. (No more Golden Grill On The Bay for me. The people who gave this place 4+ stars must enjoy stomach discomfort on the regular...or maybe I was just unlucky...either way, one and done is enough for me.)

But great things happened this week as well. For starters...
My Sailor graduated from his training program in Georgia on Friday! Yeah! And nearly top of his class too! It was touch and go for a few minutes while we wanted to see if the government shut down would effect our plans. It did, just a little. A payment hiccup has made things a tad stressful, but I'm sure it'll work itself out before he moves up here to the frozen north. 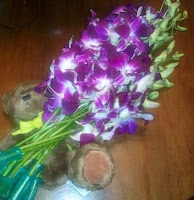 He also sent me a WONDERFUL house warming gift. My favorite flowers (purple orchids) and a fuzzy little teddy bear to keep me company until he gets up here (though they should last LONG after that, since he's only about a week away now).


As far as my previous reference to "the frozen north", it's not frozen up here.  Most days are in the 40's or 50's - which is still cold to my Californian senses. Thankfully, I prefer jeans and sweaters to mini skirts and bikinis that most folks associate with California blonds.

So I'm starting to explore my surroundings more and more. Today I was FINALLY feeling back to my old self, and I took a drive to Silverdale with the intention of seeing a movie.

I ended up seeing Source Code - and really enjoying it. While I had the main mystery worked out early in the movie. It had plenty of surprises in mind, and I'd completely recommend it to anyone who likes thinking films, like "Inception", "Shutter Island", etc.

I also discovered the Kitsap Mall, which made me feel right at home. Especially when I overheard someone say, "They build these things like we're in Southern California! I just came in here for coffee. I can't find a damn thing." It gave me a chuckle. I ended up having lunch at a great little spot - Hale's AleHouse. I tried the Troll Port. Though the name sounds awful, the service was friendly, beer was great, and ceasar salad with chicken was just what the doctor ordered.

Part of my mall excursion included using some housewarming gift cards to get some fun things for the house and some necessities:
Running shoes (necessities- I got rid of my old run down shoes before the move, so I've been walking in my hiking boots, which are great for the rain, but not for work out room.)
1 Sweater, 2 camisoles, and a blouse (necessities and fun - I figure it'll be nice to have something new to go out on a date night with My Sailor when he gets in state!)
Tron, the Combo pack (This is a toss up between "fun" and what I'd call, a total necessity for any Disney fan - especially one like me, who's mother went to school with Jeff Bridges)

On the way home, I stopped by a local grocery store that is going to be a mainstay while this Port Orchard chapter of my life continues. It's more of a warehouse style store, but the prices are right, the goods are fresh (and often local), and the guy at the coffee shop gave me some great advice on where NOT to eat (if only I'd met him sooner!).

So I can say, I'm getting used to the place. It's starting to feel like home when I come home. Hopefully when My Sailor gets here, it'll feel even more like home.
Posted by -J.D. Humenay at 12:38 AM