This weekend was fairly productive in the moving front! Not that I got a lot moved, but I got a lot of the shopping done with my folks that I needed to get done.

See, they feel that I've never really had a "fresh start" anywhere. I'll admit, my style (which I'd describe as "earthy" and "relaxed") has never really had a too much a chance to develope, due to budget constraints. My moving history of the past several decade goes something like this:

2001 -
Moved from my room at my parent's house to my then-husband's apartment. Most of the things we had were a combination of wedding gifts, a couple of boxes he shipped from Boston (his home city), and some things from my room (like a book case). So it was perfectly functional and very "salvation army chic". (Please don't misunderstand - that isn't a complaint. We had some great times living broke. Some of the best dates were sitting on the floor - because we didn't have a table - eating pizza by candle light. Simplicity totally rocks.)

2003-
We moved into a house we split with 2 bachelors. So it was me, a couple of friends from grade school, and my then-husband. We didn't have the master, so we crammed into one room to save some money so we could buy some property. Most of our hand-me-down furniture was used to furnish the house, since the guys didn't have much when we came in.

2004-
We bought a condo in Escondido and moved in. Over time, we accumulated a few new things, but we never quite got the place set up. (I am definately to blame for this because it wasn't until AFTER the divorce that I realized how good it feels to REALLY unpack somewhere. Having been a nomad most of my life, I just got used to boxes.) While in the condo we bought a new bed, a media center (that we spent a very LONG night assembling), a new coffee table, and a couch. Finally - a sense of style started creeping into my life. I would look through home decorating magazines every once in a while and all that. It was a pretty well set up place in then end (once the boxes were dealt with).

2006-
Divorce forced an attempted shortsale on the condo. When that didn't work, we foreclosed and I had to move. So I moved into the lake house, taking most of the stuff from the condo that would fit. I didn't really purchase anything new from there. I replaced a couch, inherited a TV, and bought an armoir for my computer, and that was really about it. Everything else came over from the condo.

2010-
So now, here I am - downsizing into a condo that I'll share with a roomie (as soon as I find one). Funny though - I find myself totally at peace with this new change and excited for the future. My bargain shoppers' eye immediately goes towards what's least expensive (even when other people have said, "It's a gift! We want to get you whatever you want!") but I'm learning to speak up for myself more and more and express what I like, what I don't, etc.

I'm tempted to share photos of all the goodies I picked up this weekend, but I'll just post a few - and in the end, I'll just have to post some photos of the new digs vs the old digs. While my little lake cottage definately has it's charm, the earwig infestation that appears to be happening, and the constant cold/drafts remind me that it's time to move on!

My new glasses (I didn't get the pitcher - just the tall glasses and the tumbler) from World Market (LOVE that store). 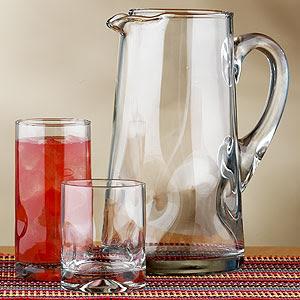 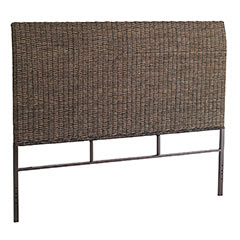 There are a few things I consider to be "trademarks" of my living space though.

Friends know you can always count on me to have a tea pot and a variety of teas in stock. Usually, there is at least 1 good bottle of wine in the house as well (especially if I know company is coming over). It's important to me to know that I have those little bits of comfort around the house.

I guess one could consider this move (while only about 10 miles from the house I'm at now - if that) symbolic. I'm leaving, selling, or donating a lot of peices of my past - and moving into the future with a more portable, simplified, coordinated life style.

And, ya know what?

I think Clydas and I will be just fine.