So my move is about 2 weeks away (yikes!) and I'm still in the process of packing, selling, etc.

But to help keep myself excited about the move, I've started thinking of my new homecoming/housewarming. I've found a few items that I plan on adding to my new place when I get the chance!

Here are the top two things on my list:

Yes, that's right. They are both BOOKS! I'm in dire need of getting caught up with my favorite authors. Afterall, I need SOMETHING to read by the jacuzzi! Last time I lived in a condo complex with a decent jacuzzi, I was in there almost every day.

An Echo in the Bone promises to be the final book in a fairly extensive series. It's an amazing historical fiction/fantasy mix. Imagine being a female doctor of England in the 1970's, and being accidentally, mysteriously sent back in time to the 1700's while on holiday in Scottland. That's the premise behind the first book in the series. It's Claire's story of survival, and the different life she leads back there. (It isn't as easy as you think!) This promises to be my last oppurtunity to follow Jamie and Claire through their lives together (which, at last count, had brought them in the US during the revolutionary war, adult daughter -who was raised in the more current world - en tow). 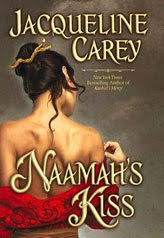 Jacqueline Carey is another favorite author of mine (though I'm not a fan of her contemporary fiction - she does create some facinating characters). This particular series is proving to be her masterpiece, as far as I'm concerned. I've tried to read Banewreaker, and Santa Oliva - and neither have captured my attention like this elegantly written series. Can't wait to see what the next one has in store - especially since another one is due out June of this year!

I'm a pretty simple soul when it comes down to it.

Of course, I do plan on treating myself to some girlish goodies as well.


Yes, a bouqet of my favorite flowers will end up arriving at my door.