The grossest bugs on the face of the planet. 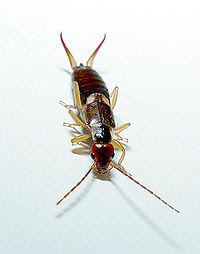 There is one thing that has come up that is making it oh-so-much easier to leave this house. And that's the newest infestation - ear wigs.

To me, these are the grossest, most irritating bugs on the face of the planet. Why? As I told my friend, Flyboy, I had a bad experience that resulted in one of these things winding up in my mouth when I was a kid. (No, I didn't put it there.) That experience sufficently grossed me out FOREVER.

Apparently they like dark, damp places. Which probably means there is some considerable wood rot around my well lit door frames, because that's where they have been hanging out. Last night when BookWorm and I were hangin out, I ended up squishing 3 of them during the course of a conversation as they attempted to make their way across the living room floor. EW EW EW!!!

Something tells me I'll be able to leave these guys behind when I get into my 2nd story condo. :)
Posted by -J.D. Humenay at 10:34 AM