Of Acting, The Whisper House, and other things....

It's really late, but I have to write this tonight before I forget!

What's in store on this blog?

1) The Answer to the "Why do you Act?" question. I was asked this for the first time today, by someone OUTSIDE of a therapist's role. Crazy huh?

2) A Review of a Brand New Musical, The Whisper House, that I caught at the Old Globe yesterday. 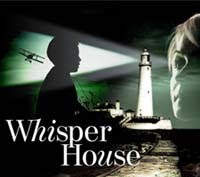 3) Why "You're really in the zone. I have to ask, do you feel victimized after all this?" is a compliment of the heighest degree. I know. I lead a sometimes interesting life!

1) "Why do you act?"
Most people ask me how I got into acting or theater. That answer is easy. My parents exposed me to theater early on. As a kid, I LOVED fairy tales and stories and telling great stories (and boy - could I tell some WHOPPERS in my day). So as a child, I remember looking at people acting and singing on stage and thinking, "I can do that." So, that's how I got into it. My mom supported me by allowing me to go to camps like Northern Arizona University's master music camp, CYT, and involve myself in school plays in high school. I know many folks stop there, but I kept that ball rolling by doing a few shows with Palomar College, local community theaters, and the like. The gig I just did tonight (excuse me, the REGULAR PAYING GIG I just did tonight - WAHOO!) is something that TheManInBlack turned me on to. More on that in #3, but why did I get into acting?

I think acting stuck somewhere around 2003. I was cast in Book of Days at Palomar College. I remember the role - Sharon, a mid-life woman who married into wealth and was the mother of the main character, a socio-pathic murderer. In case you haven't noticed, it was a real stretch for me, but I wanted to make certain that the audience could see what I saw - how Sharon was a step away from those same socio-pathic tendencies that her son acted on. One night, during curtain call, I felt this rush. I felt as if suddenly ever fiber of my being knew that tiny little insignificant me had contributed something important to the world.

One therapist would probably say that it's some innate need for attention that wasn't fulfilled in childhood. Another might say that I'm uncomfortable in my own skin, so I have to seek out others. Both may be partly true.

But I can only honestly answer with, "It's in my blood." I have a need to express to communicate. It's why I sing. It's why I write. And acting is a beautiful outlet for all those things I can't express any other way.

2) Review of "The Whisper House"

I had little idea of what to expect when I found out that the Old Globe was housing a new musical, but I do know this much - I'm not going to miss a brand new musical just because it's not yet a popular box office buster. So I went for it. Sort of an early birthday present to me.

The story is carried out in a surreal "slice of life" fashion. It's about a boy who's father is killed when the Japanese shoot down his plane during WWII. Unable to care for him, his mother sends him to live with a spinster aunt who happens to live in a lighthouse that the boy believes is haunted.

The musical has a cast of 7 cast members. 2 of them are ghosts that sing. I mean, they ONLY sing. They seem to be not truely "ghosts", but the whispering fears the boy has developed at the traumatic loss of his parents and the frightening world he lives in. There almost seem to be three layers going on during the show. There is the acting, which was EXCELLENTLY executed, in true Old Globe fashion. There is the singing - each song which stands on it's own. And there is a multi-media projection show during many songs (which, due to my seats, I couldn't really partake in too much).

Let me remind you of the time period.

This takes place during WWII.

For those that don't know their history, the Japanese were treated appaulingly during this time period. One of the beautiful character peices in this play is drawing attention to the unfair treatment of the Japanese Americans back then.

It's well worth seeing, but go into it with an open mind. I found it facinating because it made me think. The music achieved it's haunting goal (and I'm now the proud owner of the soundtrack). And the acting - well, if done with a less committed, less talented cast, this show could be a serious flop. But the skill of this group made a lasting impression on me. The show is done in an original style that manages to engross the audience with simple, useful, meaningful set and characterization. It's middle of the road Avante Gaurd meets Minimalist style.

Facinating, and well worth a second peek to me. (The opening night was frought with usual opening night glitches - like a sound man who didn't have his/her cues down just yet.) I'm excited to see where this show goes! I doubt it'll disappear into the archives of musical theater obscurity.

3) Why on earth is THAT a compliment?
Tonight, I worked my regular gig for the police. It's part of a special training course where cops are taught interview and interrogation techniques. They needed a rape victim, so, for the last couple years, I've been playing the rape victim for them.

Basically, they give me an outline, with a character information and scenerio information. Then I sit down in a room with a Victim Advocate, a trainer, and a small group of cops. One of the cops has to interview me.

The interview techniques they use involve learning get the victim (me) to relive the night of their terror three different ways. First, I relive it from the begining to the end. Then, from the end to the begining. And finally, from a different perspective. Each time I recall more and more detail. (When done correctly, I am able to piece together who the rapist was all together.)

I do that for each of 5 groups that come through my room. My reactions are based on thier use of these techniques.

Well, tonight a lady officer (an observer) came up to me after my last class and asked "How do you feel after this?" I laughed and said something to the effect of, "Exhausted. I worked all day this morning at my day job." She continued, "No, no. I mean, I saw you. You were really in the zone there. Don't you feel victimized?"

Obviously, I did my job right. Most actors will tell you that this kind of one-on-one acting with your audience, with this level of improv is very difficult. Each time I learn something new, have to think on my feet, and yet make it beliable to someone who isn't more than 3 feet away from me. They have see it in my eyes to believe it. And that - as even the most skilled actor will tell you-is the goal.

(Truth be told, my poor co-workers have to put up with an exhausted, emotionally drained, slightly depressed coder the next day. But it's worth every minute. Not only do they pay well, but I really feel like I'm doing some good. Better these cops mess up on me than an ACTUAL rape victim.)