Congradulations to a Glass 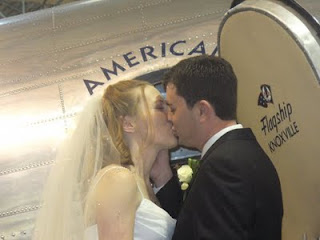 This weekend, another pal from high school got married.

I have to admit, she has one of the most creatively themed weddings I've ever seen.
It was a travel theme - which fits the voice-over artist very well. 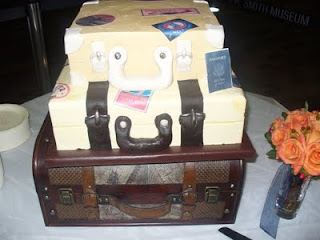 The two ladies below I knew in high school, and, as of this year, neither of them have the same last name anymore. In a few months, they'll be celebrating their first very married Christmas. 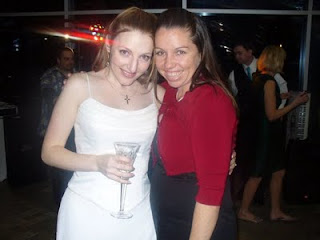 It's always bittersweet to see people move away. Not that the former Miss Glass (the bride) and I were exceptionally close, but it's a reminder of the constant changes we go through in life. While some would argue marriage is "just a peice of paper", I believe otherwise. It's a big change. It won't "fix" a troubled relationship. It's security comes from the amount of trust and commitment between the couple - to the point where they wish to honor one another by saying, in front of witnesses (family and close friends), "I choose this person to share my one and only life with."

Marriage, in my eyes, is one of the last remnants of honor two people can give each other in our society. In a marriage, it's a constant act of forgiveness, commitment, devotion, and the decision to grow together when the world would rather tear you apart.

How can a divorcee like me feel this way about marriage?

Yes, I'm divorced, and it's given me a different insight now that I didn't have before. But I refuse to believe because the vows of my youth were broken, that marriage is a "bad", "negative", or difficult thing.

And I know that everything is easier when you aren't in it alone.

Would I get married again?

I hope to! Granted, I may never be a tradition domestic goddess. I know my version of "settling down" more mimics the wedding theme above than any dreams of 2.5 kids and a white picket fence. I believe life is an adventure - and your family are those you choose to accompany you on yours, and them on theirs.

So to these newlyweds, I won't say "good luck", because "luck" has nothing to do with it.

I will say - "May your mountains be tall - and the view be worth the climb.""