Realizations and Reviews from a Theatrical Weekend

Last Thursday began, what I've come to call "the great theater weekend!"
Until I find some weekend to top it, I attended 3 shows in 4 days.


Here are the reviews on those shows: 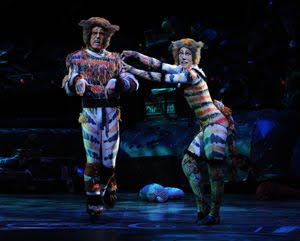 "Cats" at the Moonlight in Vista

A pretty decent show, but it seemed to lack that one essential ingredient that makes some shows truely work.

The singing was good.

The dancing was great.

The acting though... was just a tad lacking. So while it was enjoyable, it felt a bit like a variety show (which is somewhat what Cats is, so that's not too far off), but it wasn't quite there on the emotional level for me. 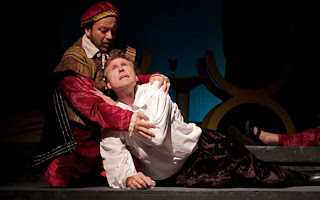 Kudos to each actor for knowing his or her lines well. Also, kudos to the lighting design and costuming crew. Very nice. And the price was right (free).

While it's very sad to see this theater lose it's funding, I was a bit less impressed by the overall acting. It almost felt that they didn't have enough time spent getting to know their characters. This scene depicted in the picture was probably one of Hamlet's truest scenes, but I didn't really see his descent into madness as I would have expected. Instead, the character felt more like a spoiled, scheming brat, than a truly tormented man.


Overall, it felt adequate for a community theater show, however - had I paid more than $10 for the ticket, I would have felt disappointed.

But before you think I hate everything... 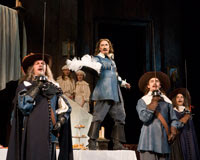 THIS WAS THE MOST AMAZING PERFORMANCE I HAVE EVER SEEN!

There was not a single weak link in the entire cast. 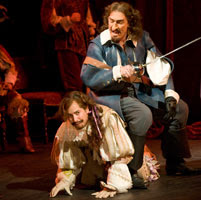 Each actor was either Equity or a student studying as part of the USD Master of the Arts Program. And it showed.

This show was 3 1/2 hours long with 2 short intermissions. And it was SOLD OUT and well deserved. If I had paid $100 for my seat (which I didn't), I would have felt I got my money's worth.

Unlike Cats, this show relied completely on excellent acting and character choices. Patrick Page and Cyrano carried the show along beautifully.


My Personal Take on the Story: Cyrano, while conflicted, was a man's man as far as I'm concerned. He knew the value of words, and had the drive to better himself to bring himself and those that knew him (comrad and foe alike) honor. While a furious villian at times, a deeper honor stood out in the sincerity of his expression to his love, as well as his interaction with the men close to him. Though he bucked society to the point of obsurdity at times, he also gave all he had to one woman - despite the fact that she may never be able to return it. Honoring those he loved was more important than his own pride in the end.

And for that, I am honored to have been able to be among the audience. It reinforced my beliefe that romance isn't optional - when it comes to love, it's a necessity.

The differences in all the shows reminded me that I am on the right road by giving this acting thing a real, definate shot.