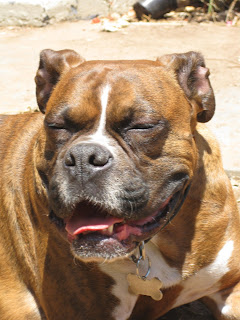 As Clydas and I enjoy a beautiful Memorial day holiday (and I catch up on some much needed housework), I'm visited by an old friend...

It's called restlessness. It's not that I don't like having a "home base", it's just that I have never liked feeling hemmed in (even when the prison is one of my own creation). Like most of us, I get caught up looking for the "destinations" in life, rather than enjoying the journey. I think that's probably why I get restless. Here's the run down of the latest "destinations".

I officially finished my college course in World History. I earned a B, which isn't too bad, considering the weighty subject matter and sheer mountain of reading involved. So my first attack back at college acedemics since 1998? Successful.

I am almost below a weight mark that has haunted me for the last year or so. About damn time. I am reminded of a chant I did when trying to bike over a hill during last year's triathlon, "Almost there. Almost there. Almost there..." It seems silly, but it got me over that hill (twice). I'm sure it will serve me well on this endevour as well. There are a lot of emotional issues that come along with being overweight - and losing the weight. If you've watched The Biggest Loser you've witnessed the effects of some of them. It's a true struggle to decide to stop swallowing your emotions (literally) and face them and deal with them. Some days the battle is easy and you eat the bear. Some days the battle is hard, and the bear gets the better of you. But everyday is a new day to conquer the bear. What is "the bear"? Largely, for me, it's fear. Fear of being inadequate. Fear of not meeting the needs and expectations of those around me. Fear of falling short in some way. Fear of being selfish. You name it.

We all have our "bears". As they said in The Adventurer's Club, "Some days, you eat the bear. Some days, the bear eats you. But always dress for the hunt!"

In case I haven't shared this on here before, I'll share what this little nugget of Disney-created wisdom means to me.

As I said above, I define "the bear" as whatever holds you back. It's your brick wall. It's that demon on your shoulder that tells you things like, "You can't", "You're unlovable", or "You're worthless". Some days, overcoming that feeling comes easily. That's when you're eating the bear. The days when those feelings get the better of you is when the bear eats you. "Dressing for the hunt" means being as prepared as possible every day for defeating that bear. My protection for "the hunt" comes in the form of good friends, warm fuzzies, prayers and positive thoughts from my friends and family, and learning that I'm only human and some day it's okay that the bear gets the better of me. Afterall - there's always tomorrow!

So with that in mind, I'll close with a "warm fuzzy" of mine. This one just happens to have 4 legs and a tail...er...a nub. Whatever new adventure awaits me, he's most definately along for the ride. :) 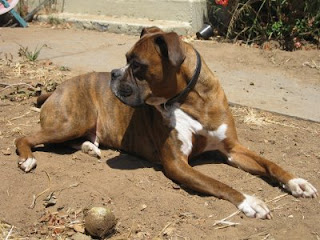 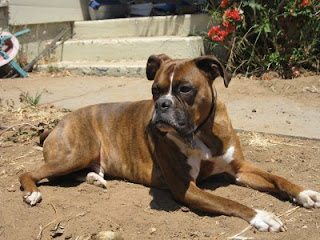 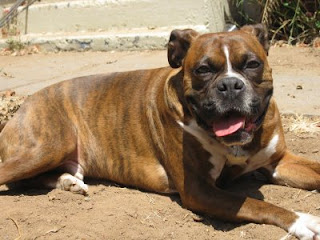