"I'm mad! I'm so, so, so ANGRY!" The Impossible girl screamed as she stormed around the bathroom this evening, throwing everything that wasn't nailed down. Even things that were surprisingly heavy for her 39 pound frame.

"GO AWAY! LEAVE ME ALONE!" She sat on top of the giant 48 roll pack of toilet paper on the floor that she'd pulled out and attempted to throw from the shelf. It formed almost a little throne around her crossed armed and crying form, as if that were all along its intended purpose.

I didn't go away. I sat on a stool across the room some distance away and calmly said, "Okay. I'll leave you alone. I'll sit over here. I'm here if you need me." I didn't leave and I didn't distract myself with my phone. I just held the space with her. I wasn't sure how this was going to end, but I remembered one of the best peices of advice I've ever gotten. 'Bring your calm into their storm.' So that's what I did.

After a sniffle filled moment, her shoulders sagged a little and she crumpled and said, "I'm feeling sad."

The other parenting advice that I've used came in. 'Be a Sportscaster.' Validate that you are hearing someone when they are struggling to be heard. I thought about what it would be like to be her for a moment...

"You're feeling sad. Yeah, I hear you. You're feeling angry and mad too. I can see you crying." I paused to let the calmness stay in my voice and to give her time. If there is something we have in abundance of, that seems to be it these days.

"Can you tell me why you're feeling sad?"

There it was. As I suspected, it had NOTHING to do with the bath.

Earlier in the evening she had a virtual playdate with a good friend from school. She was very excited and they played pretty well together. They told jokes only 4 year olds find funny, and built legos in their seperate rooms, sometimes showing each other what they were building and sometimes not. The familiarity was there. Nearly an hour into it, it was time for bath and bed time.

She didn't want to say goodbye. I gave her a heads up when were 10 minutes away. Then 5 minutes.. then 1... and finally when it was time. She was mad. She didn't say goodbye. She slammed the laptop shut and ran to my bedroom, angry.  I followed at a more measured pace and she was on my bed, hiding herself under the covers as she giggled and begged me to tickle her.

Yeah - I knew this was coming. The tickles were an attempt to distract herself from the feelings in the hopes that they would just go away.

10 minutes later, they hadn't gone away, and she was lashing out about getting a bath - which is usually a fun activity.  Normally a very even tempered kid, this was the straw the broke the camel's back.

Today, this 'goodbye' was one too many. 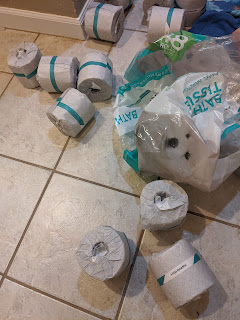 Once she caught her breath, she started taking out rolls of toilet paper (they were all individually wrapped anyway) and throwing them, half heartedly. She tossed one to me, which I caught, and she brightened up and immediately wanted to distract herself with a game of catch. I tossed it to her, she tossed it back to me... and then I said, "Hey, why don't we empty that back of toilet paper. Let's throw them at that wall as hard as we can, and yell and scream something we're mad about every time we throw one. It's safe because we won't break these, and I think it'll feel good. I'll start."

"I'm mad because I miss going to the movies!" I threw it at the wall. It landed with a thud and tumbled to the floor, slightly misshapen from the force.

She smiled and did the same thing, repeating after me.

"I'm angry because I miss going to playgrounds!"

She copied me again, getting more umph into that throw and seeming to get the idea that it was okay.
A few more rounds when by - after all, we had 46 rolls of toilet paper to hurl.

"Now you start. What are you mad about?"

"I'm mad because I Can't see my teachers!"

"Good! What else makes you mad right now?"

"I'M SO ANGRY BECAUSE NO ONE WANTS TO BE WITH ME!"

There were only 2 rolls left. I don't even remember what we said for those last two, because that one hit me hard.

She can repeat back to me all day long that places are closed 'because of germs making everybody sick' and 'but we're not sick' and 'we don't want to get sick', but it still, deep down in the gut feels like something supremely familiar to me -

I know this one. I figured out how to make the lonliness and (sometimes frustrating) silence more of at traveling companion than a demon, but it took years - and a hell of a lot of validation (among other things). In fact, as an adult, I quite enjoy being alone in the quiet of the world from time to time.

Her journey with it is just begining.

I explained (though I know no amount of talk can truly heal it - it does help to mitigate it) that it's not that her friends don't WANT to be with her. We talked about how much fun she's had with the people who have done play dates, sent letters, done videos, etc, but I know it 'feels' like that somedays.  And it's okay for her to feel like that.
Because she only has me in the flesh (don't tell Odin and Apollo, but they aren't exactly the same as siblings/friends) - and some days, it's just not enough to fill that space. And honestly, it shouldn't be! That space in her heart is there for more than 1 human! It works that way for all of us!

I don't take that personally - I get it on a viceral level, trust me . (If you're just tuning in, I lived alone in a hunting cottage on a lake for 3 years post divorce and it was pretty awesome.)

But the rational mind isn't in control of the feelings. She can say, "'cause of germs", but that doesn't make it feel any less lonely.

The world is changing, and while she's handled it in stride, this abiding lonliness will be the fall out, for certain.

Bedtime led to the usual fear of me leaving the room. She's fallen asleep on my arm nearly every night since this started. I have no interest in sleep training right now. She won't be doing this into her teens for certain. I'm going to physically be present as long as she needs that physical comfort right now. Once she's asleep, I slip out, and she knows she can come to my room/bed if she needs me during the night.

What. A. Night.
But a theraputic one.  I picked up and stacked the toilet paper after the storm was over and she was fast asleep.

This generation will pick up the peices of friendships and relationships, and craft ways to bridge the chasims that, some days, seem so vast.

They will have to.

Necessity is the mother of invention. Even the invention of coping mechanisms.
Posted by -J.D. Humenay at 11:27 PM