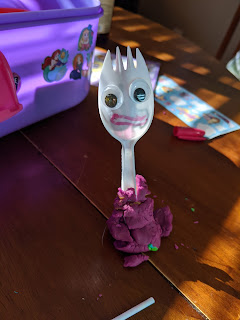 Our local Buy Nothing group has been an amazing help in raising The Impossible Girl. Between hand me downs from family and that group, we were able to clothe the kiddo practically for free for years. It's been amazing to connect, and regift the things that were so helpful for us.
Yesterday, a neighbor on Buy Nothing was giving away some toys. The Impossible Girl has recently become a Toy Story fan. She's seen them in no particular order, but she's never had any Toy Story specific toys, aside from a 1 inch Bullseye figure from a blind bag.
I got her a Toy Story 4 random toy for under $10 on our last grocery run. Since it was delivered directly to our trunk, which toy the shopper picked for us was a surprise to both of us. She got Rex, which she may not have been enthusiastic about for about 1 minute. Then she was excited to feed him her fries, discover that his arms and legs and head could be posed. It was quickly a favorite toy...

Which, of course, as happens with toys sometimes, was left on the floor, and a bored dog got a mouth on it... 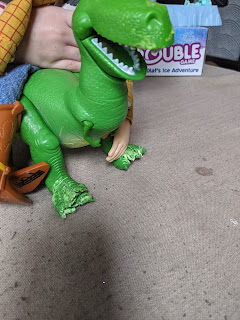 There were no tears, though she was visably disappointed - for about 5 seconds.
After a conversation about picking up toys and not leaving them where the dog can get them, we brain stormed places they could go instead of on the floor (the shelf, on the dresser, on her bed, in a toy bin, etc), she immediately said, "But I still play with him, right?"
I offered to get a fixed one for her (Rex isn't exactly an in demand character, so he is fairly easy - and cheap - to come by.). And she said, "That's okay. I still play with this one."
My jaw pretty much dropped inwardly and I feel like we did a good job with this one.
So that brings me to the tale of her latest best friend. The Woody doll came from our local Buy Nothing group. After a quick clean up for possible germs, he came on the road with us. And in the car, and bed, and to breakfast. An ever present buddy at the moment -and maybe just what she needs right now. 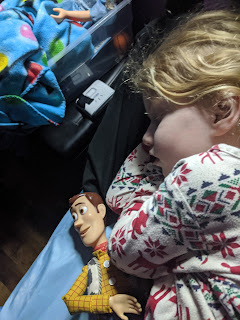 When we picked him up, his had was missing. He had a few scratches, and had obviously been well loved. He has a pull string, but no longer has a voice. I offered that maybe we could make Woody a hat, she said no thanks. I offered to try to fix his voice, she thought about that for a while, and then said, "Maybe,". As she looked him over, I wasn't sure if she would end up disappointed. The doll was obviously not new (which is to be expected from a free gift), and had another little girl's name written on his boot.
Another 5 seconds of consideration, he was her new best friend, with BIG hugs and a couple kisses. 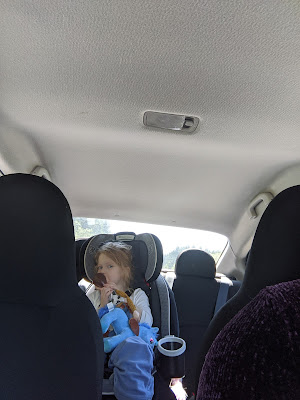 She doesn't waste time wishing that he was something he's not. She embraces the reality and finds something to love about it.  We have always been okay with hand me down gifts. 'New to Us' is just fine, and it makes the 'new' even more special.

Maybe it's a phase. Maybe it's the age. But I hope she always takes a few seconds to evaluate any situation, and then find the fun in it.
Posted by -J.D. Humenay at 11:01 AM