I'm taking a break from the regularly scheduled blog (the wrap of up the Trainaversary series) to update you on all on the event I did yesterday - My First Throwdown. 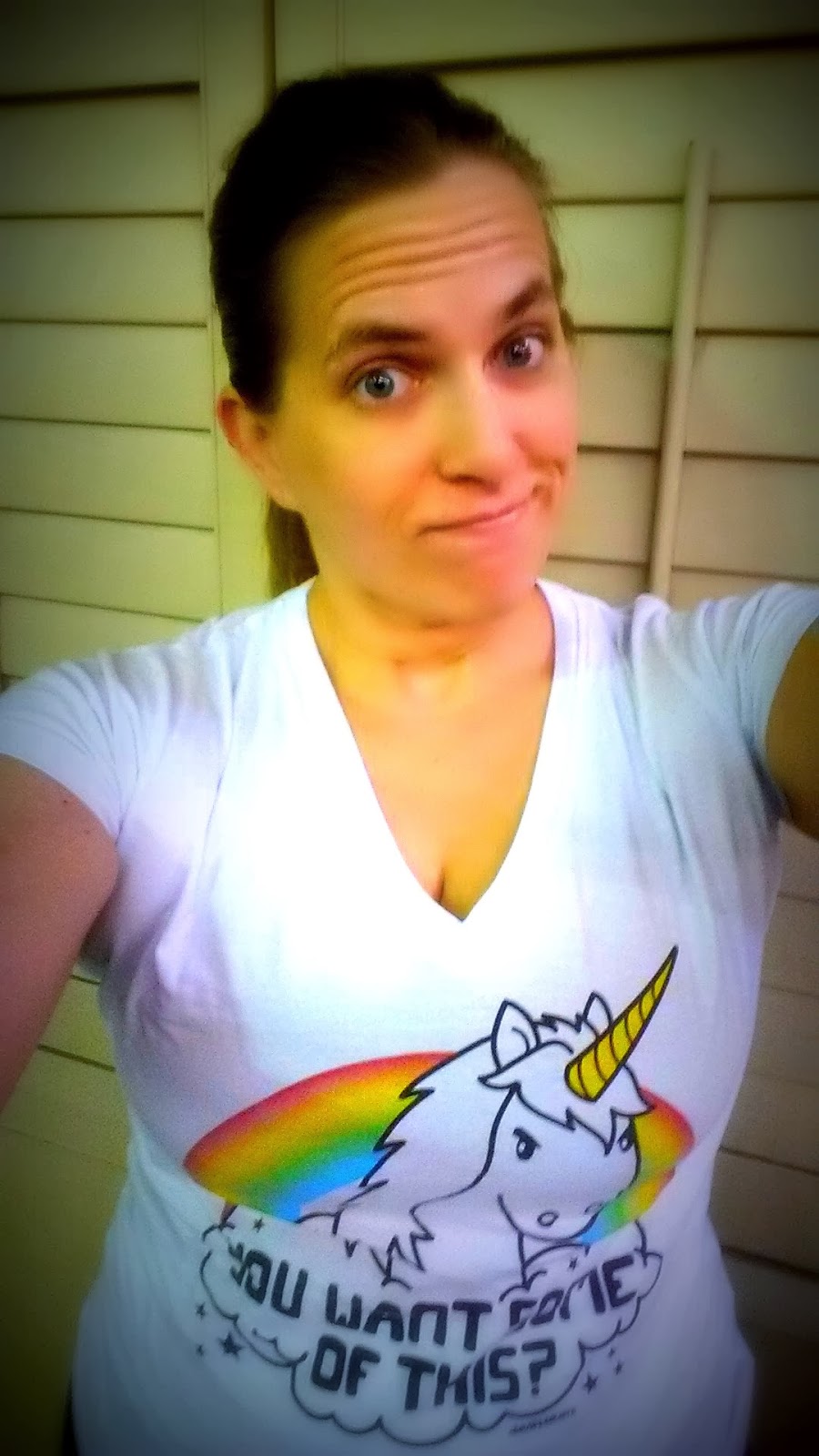 To put the entire day into perspective, I can say this -
When I signed up for the Strongman competition, I'd been training for it for months. I'd been flipping tires and pulling sleds for at least 4-6 weeks prior to that competition.
For this competition, I'd heard about it a few weeks ago (when the Power Lifting Competition I was planning on doing was canceled). It filled up too quickly for me to get in, with a strict 25 female participant limit, so I figured it was case closed and not ment to be.
Well, 3 days before the event, someone canceled.
And Trainer Guy told me about it.
After our session, I emailed them and was able to snag that last-minute spot.
As soon as I signed up and read the events, I started to wonder if it shouldn't have been more aptly named a "Throw up" rather than a "Throw down". The lifting events didn't worry me. It was the middle section that I was most anxious about.
Trainer Guy had a much needed vacation coming up, so prepping for this was pretty much on me. He gave me some good advice and some good strategy for the first event. After that, I had to ride out my anxiety.
I'll be honest - I almost backed out. The second event seemed too scary and there was a lift in the 3rd event I've never done, and I was getting a tickle in my throat. In fact, I hadn't slept more than 4-5 hours in a stretch any day that week, in attempts to balance adoption stuff, deployment stuff, work stuff, house stuff, and training stuff. But most of all, looking at the list, the 3 things I thought I couldn't do stood out more than anything.

Then I reminded myself that courage isn't skipping ignorantly into the future. Courage comes from facing what scares us, and doing it anyway.

The night before, I scheduled a celebration at a local (largely gluten free and amazing) Tapas lounge and I invited some friends to come to the after party. I also welcomed them to come to the competition as well (though I doubted anyone would be up for it).

So fast forward a bit and I walked into a Crossfit box (aka gym) for the very first time.  It was an intimidating experience. I followed what looked like a line of people and made my way in.  I signed a waiver and chit-chatted with my fellow "athletes". Just being called an "athlete" in this context made me feel like they must have been referring to someone else. After all, I don't do these things... do I?

I asked questions of those around me regarding the equipment, since I'm not used to working with such different bars and bumper weights. It felt as though I was an astronaut that had just landed on some alien planet. I gleened what knowledge I could from others, and was relieved to know that one of the events I was worried about ran a little differently than I anticipated.

Sunshine and The Lady in Grey showed up just as my heat was about to begin. It was a relief to have someone to take photos and just be there. I was the only person not representing a Crossfit Box, so I didn't have a "gym" I was representing and a team of coaches right behind me. 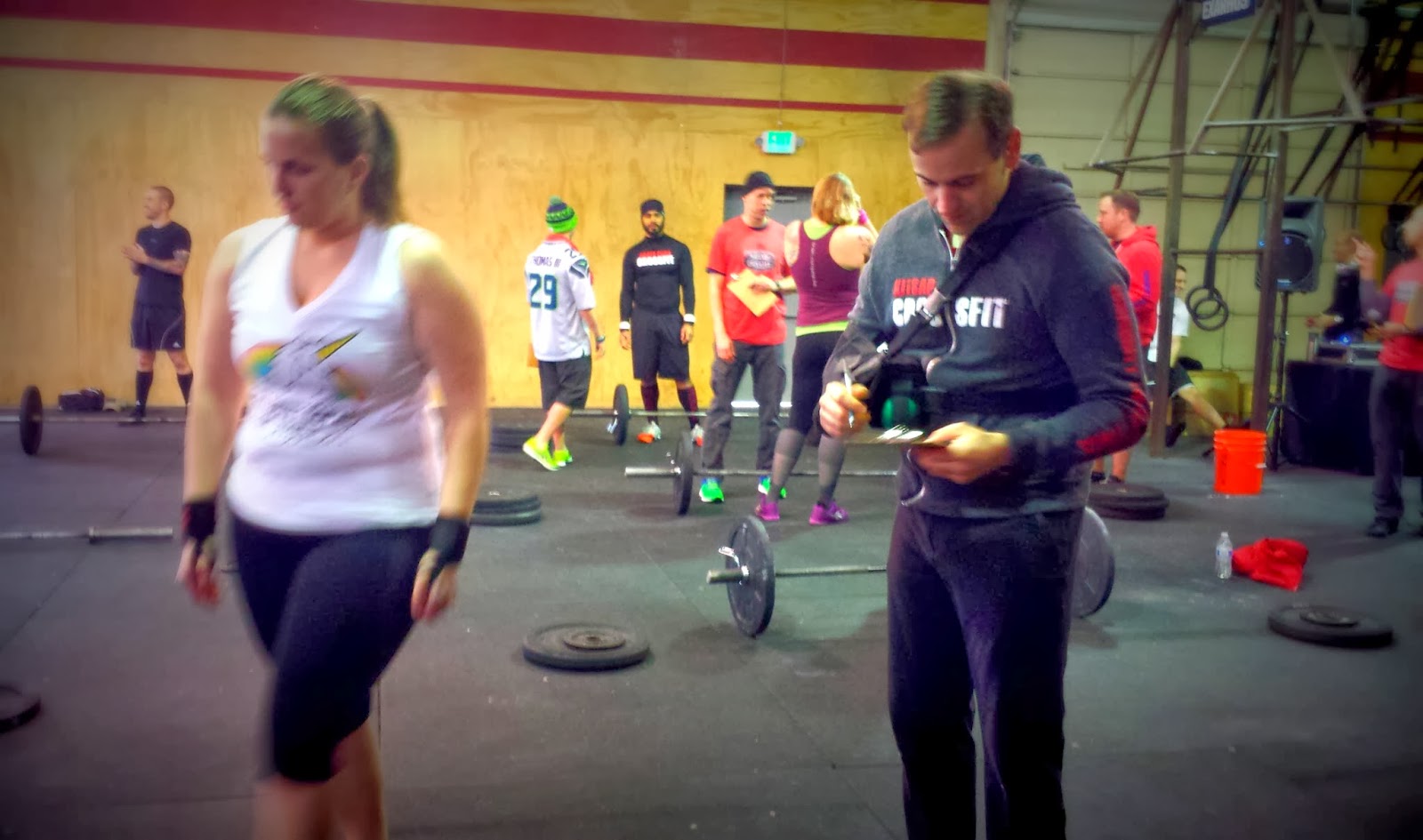 So when they called my heat, I met my judge and got ready for the event.

The goal of this event wasn't do to 1 really heavy lift. It was to lift as many pounds as possible, during the above referenced forms.These forms I knew. Weight lifting I am pretty confident in -especially since I had a pair of near personal records on my week Monday and Wednesday. That said, I was still sore from Wednesday's record setting lift.

When I tried this sequence in the gym at the YCMA, I lifted heavier and lifted 4580 pounds within the time and forms allowed.

When I went into the competition, I aimed for lighter and faster.

This time, I scored 7202 pounds moved within the time and forms allowed. My back was feeling the pain from the previous one rep max, and I was afraid I was going to hurt something, but toughing it out helped.

Here are a few snap shots Sunshine caught from that event -
Snatches - each from the ground up, for 45 seconds. My weight was 55lbs.


Clean and Jerks -
Added 10lbs to the bar bringing it to 65lbs.
Clean and jerks are a lifts from the ground to the shoulders and then powerfully overhead using speed to bounce the bar up and get under it. They allowed Push Jerk and Split Jerks (among others). The Push Jerk saw me through until I started to get tired. Then I opted for the Split Jerk because I knew my next lifts would be much heavier. My goal was to save some energy in the tank for the final lifts - which is one of my best. 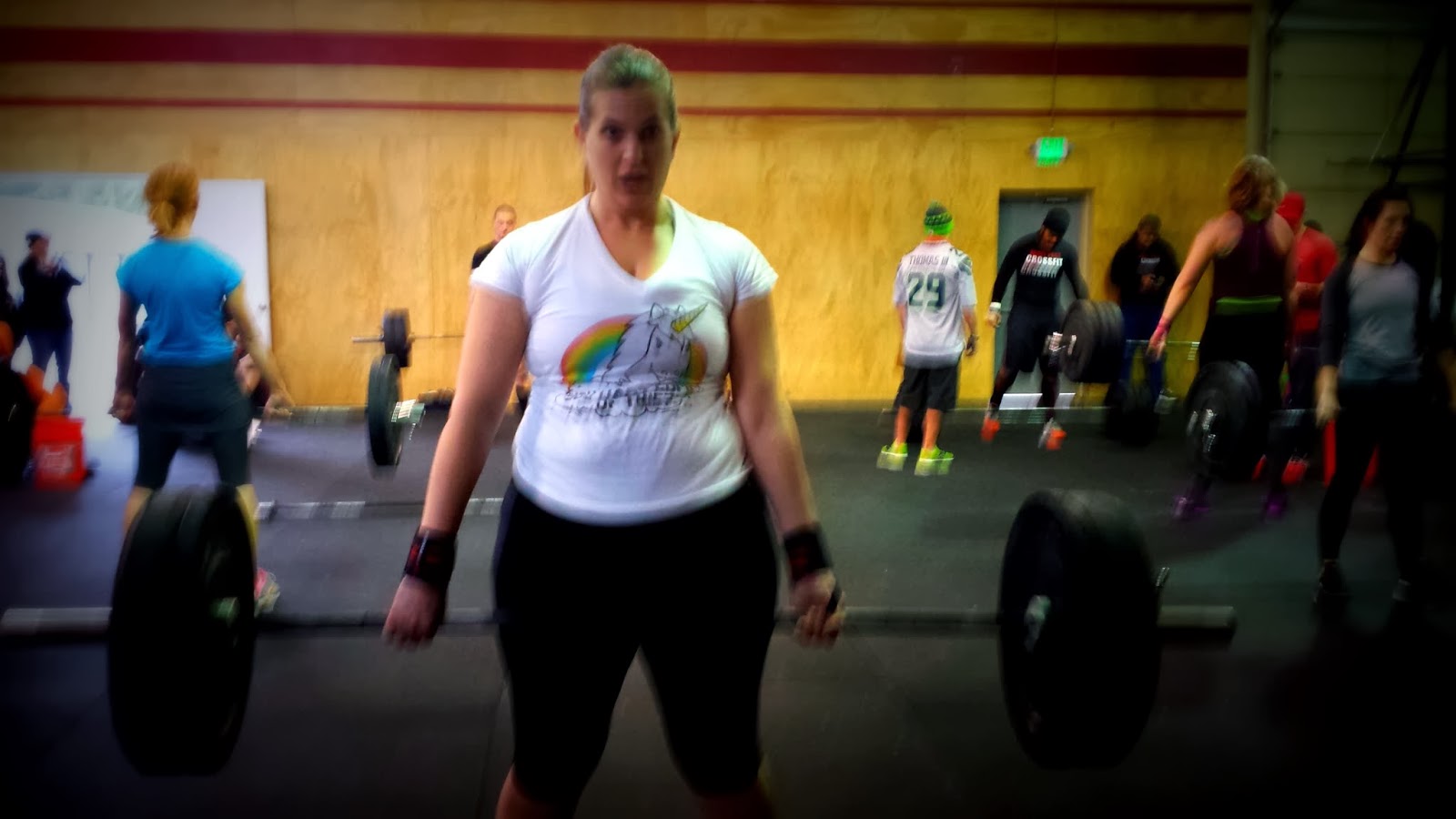 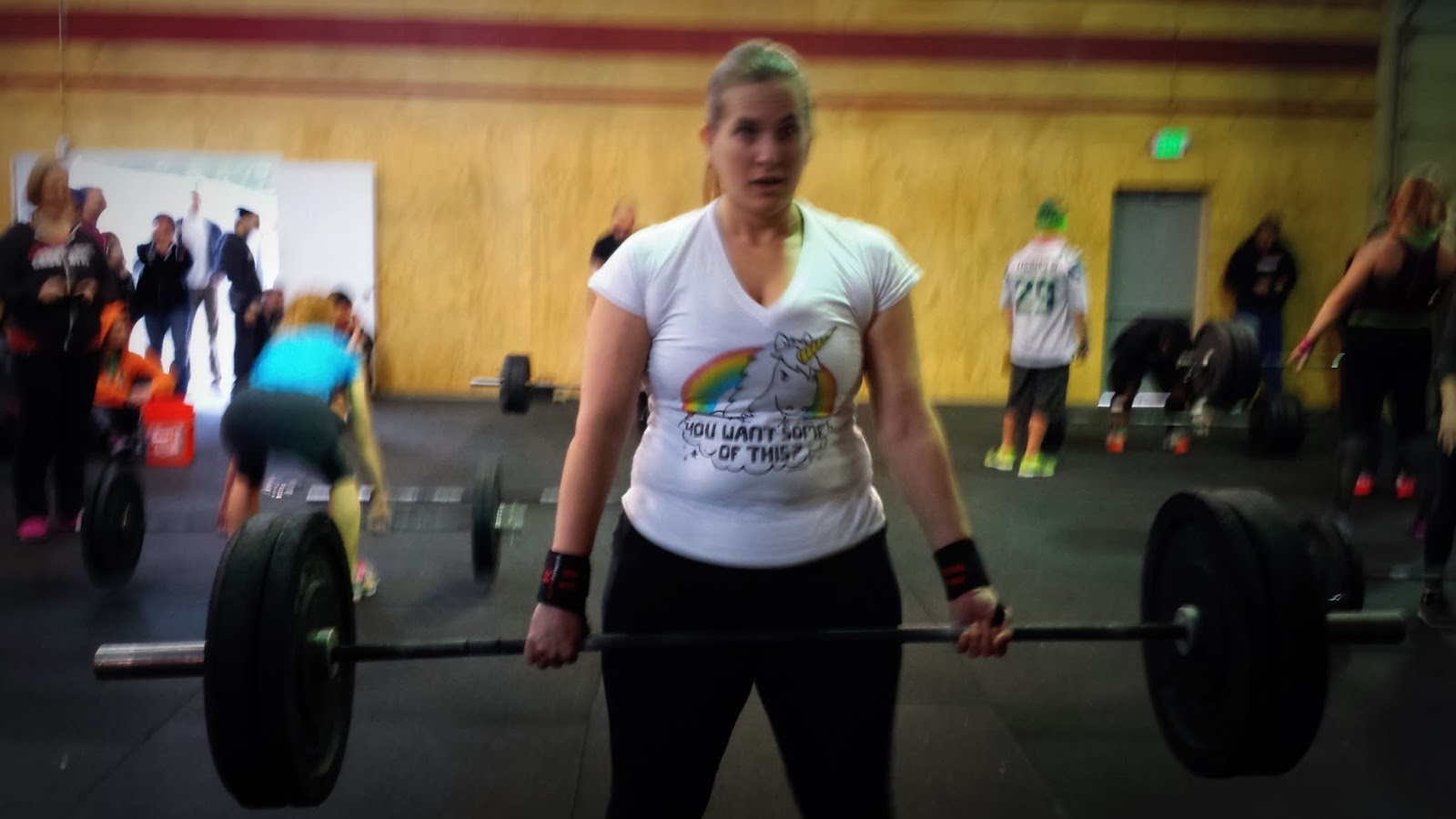 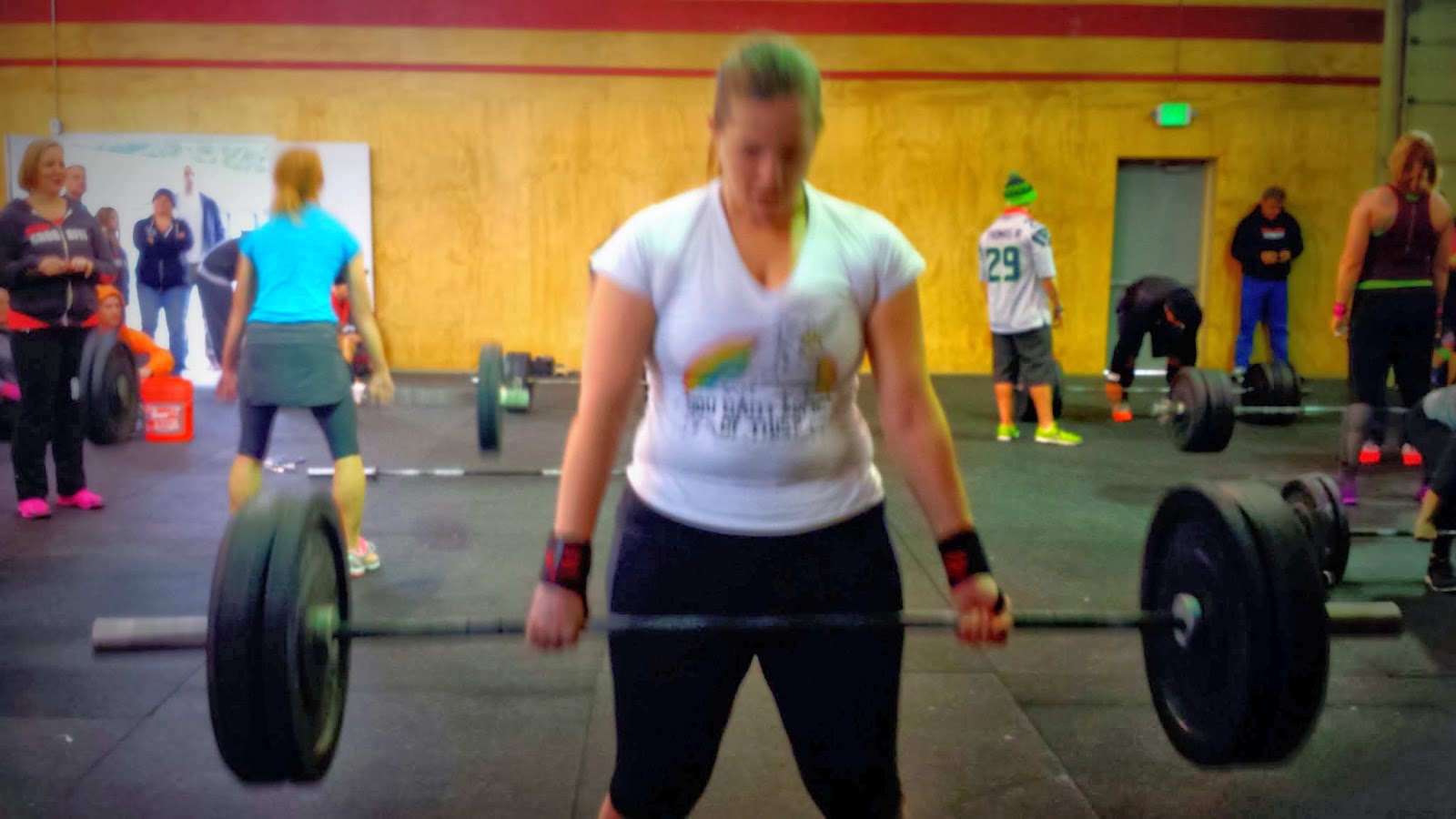 Added 95 pounds to the bar, bringing the total weight of it up to 160lbs. This was obviously the right move. I think I got a little over 40 of these out in 2 minutes. I took one rest of about 4-5 seconds during this LONG set.

I had none of my usual problems in the gym with this. No slipping grip (though my hands were on fire afterwards). No pacing issues. My judge was great as well. He coached me on in all the right places, counted off my reps when he was surprised with me, and helped me get through.

I was shocked when they announced that I'd made 3rd place in this event!  I prefer not to look at people while I'm lifting, so I pick a spot on the wall some distance away and go at it as if no one is there. When I'm looking down, that's usually a sign that I'm tired.(I'm learning to work on this.)

The announcer asked what crossfit I was from. No one in the community had recognized me. I was laughing out loud when I came back with, "I'm not from a box!"

My answer was honest. "The YMCA!"

The murmurs of shock were pretty funny.

Suddenly, I was a contender in this group of (what I considered) elite (or at least higher level than me) athletes.

I had no illusions of greatness though. The next event was going to test my medal. My goal was simply to survive. Once I heard they capped it at 15 minutes, my goal was to get to the run. 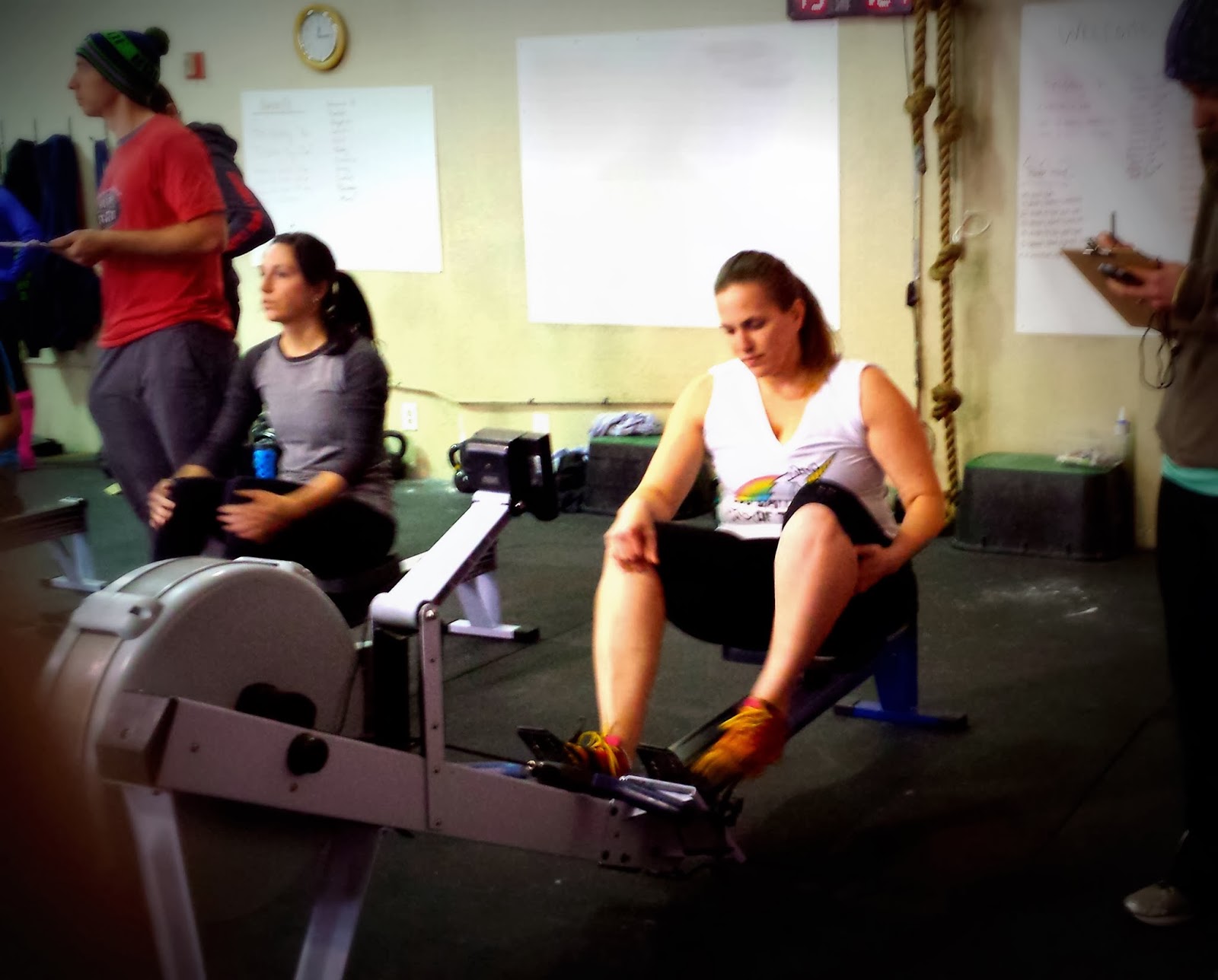 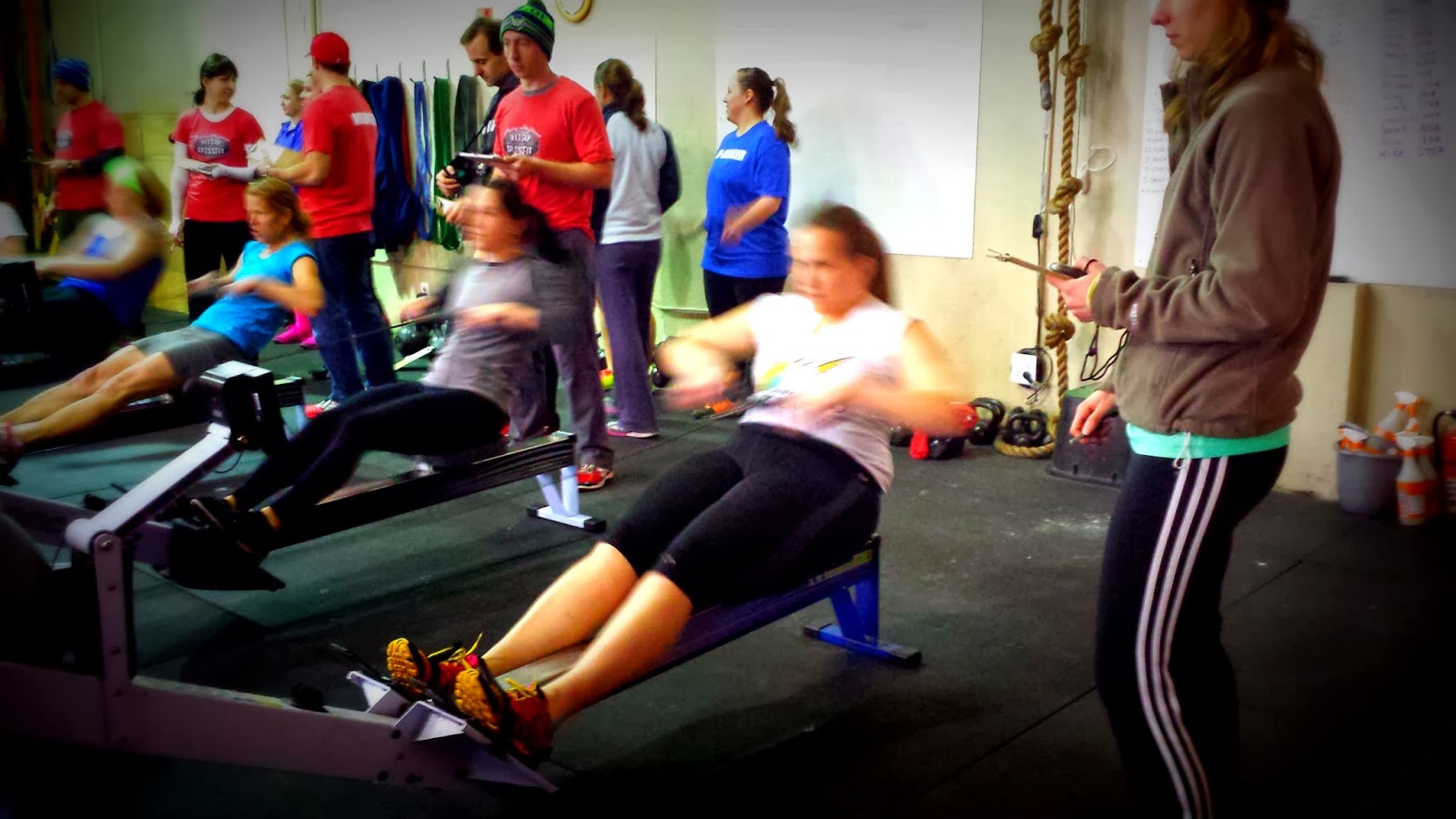 During the competition, they did lower the kettle bell weight to 26lbs. That worked in my favor. I wasn't too worried about the 35lbs, but the decrease in weight would let me save strength for the burpee box jumps.

Then I learned that ALL of the athletes were doing step ups instead of box jumps. It saves energy and is faster.

That was a huge relief.

They also announced a 13 minute cap. This wasn't a good thing. I was pretty sure I could do it in 15 minutes or less, but 13 minutes?

My strategy was to treat the row as warm up, take it easy on the lunges, make up time on the swings, and stay steady during the burpee box jumps. Then lay that 25lb on my back and get as deep into the run as possible.
So, off I went. 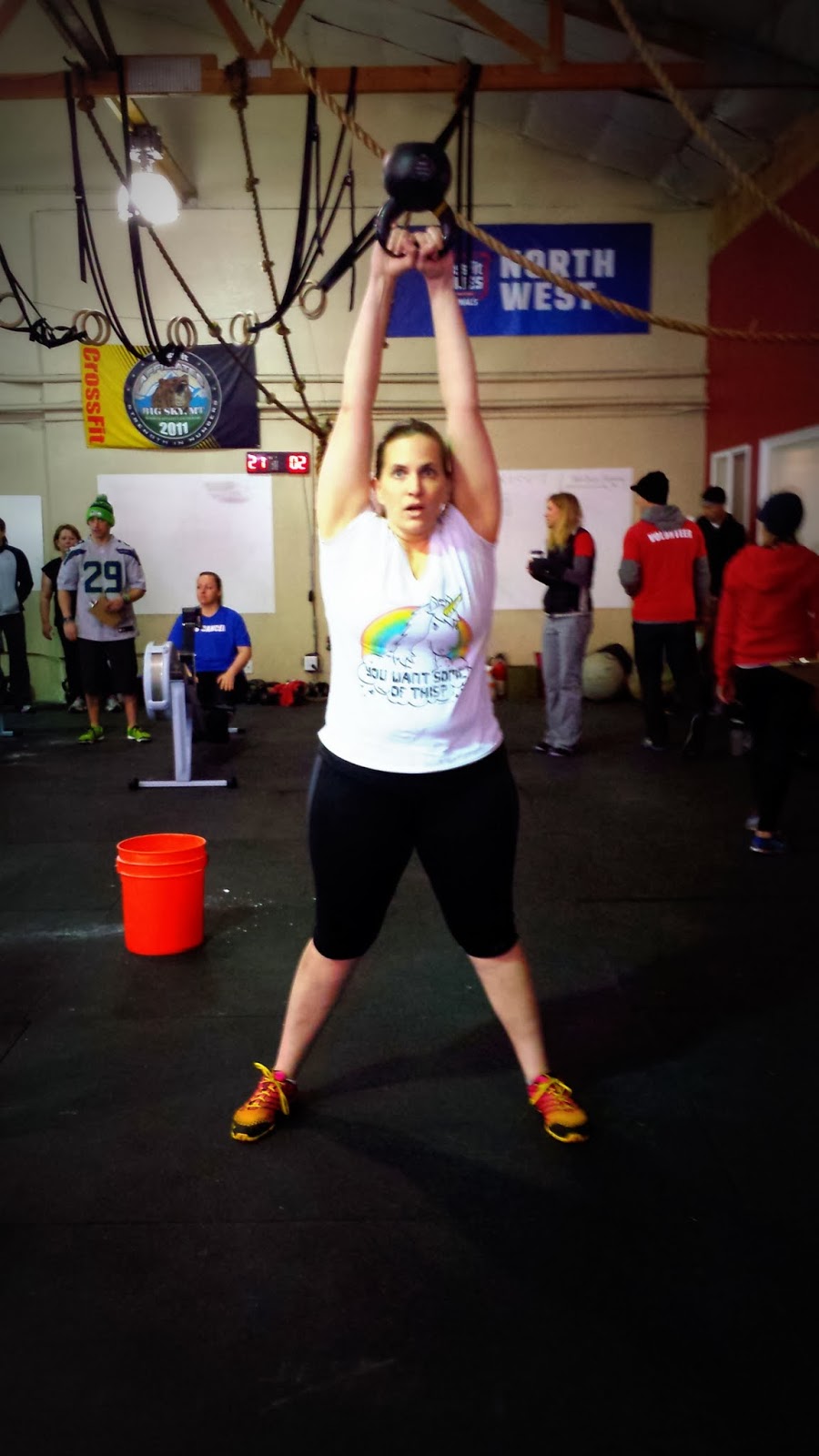 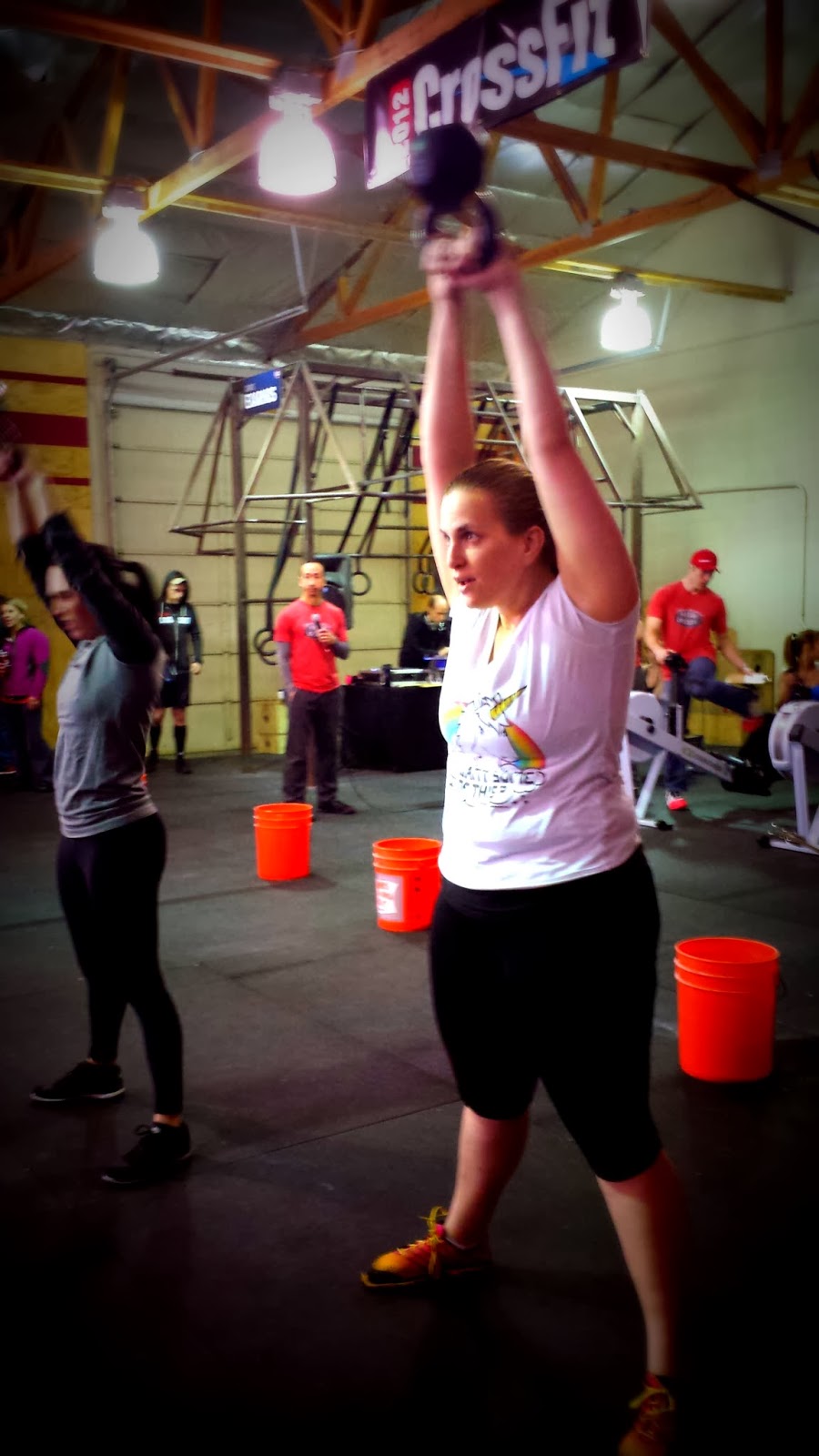 Bowing to the power of the mighty Burpee Box Jump - 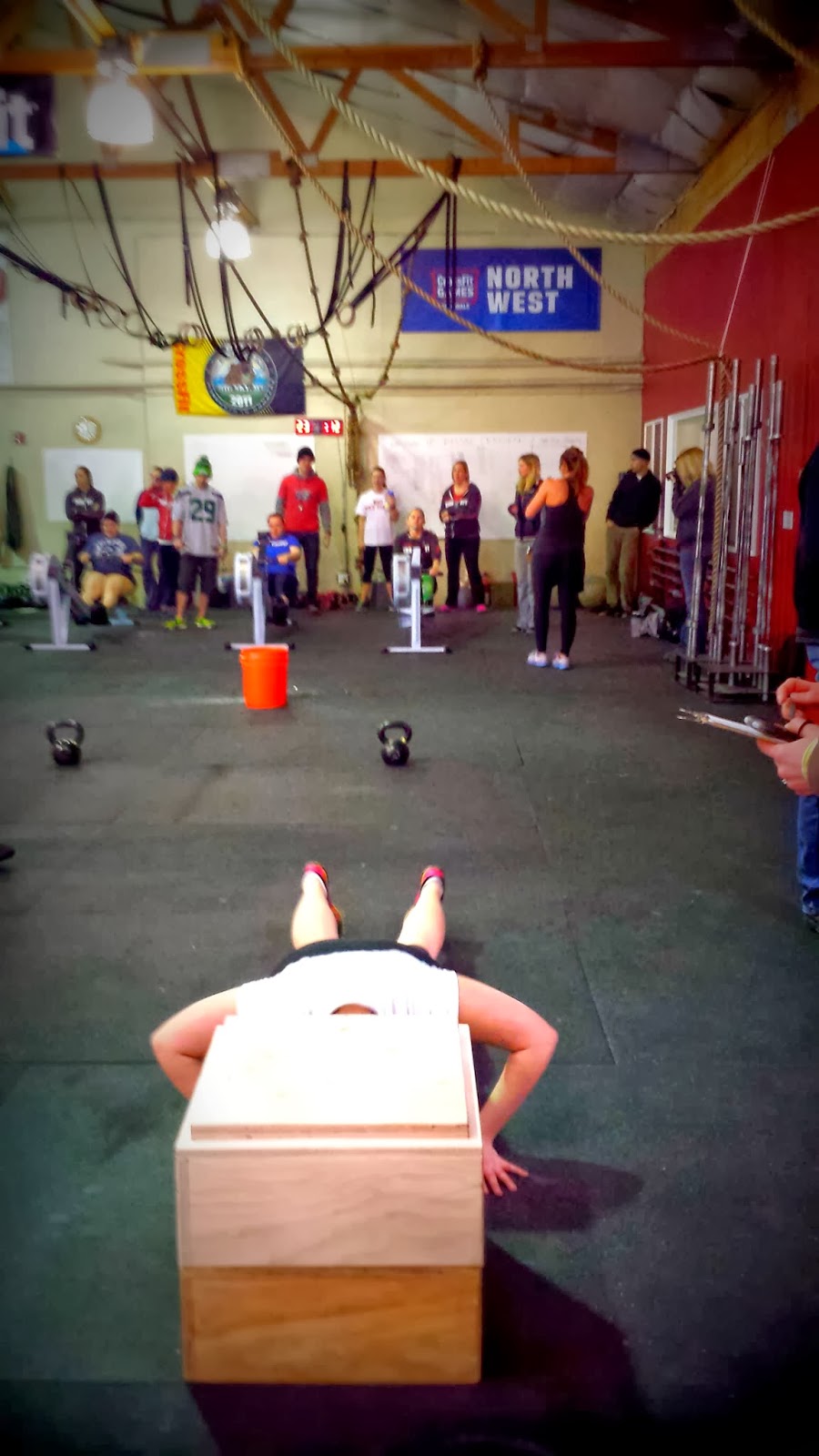 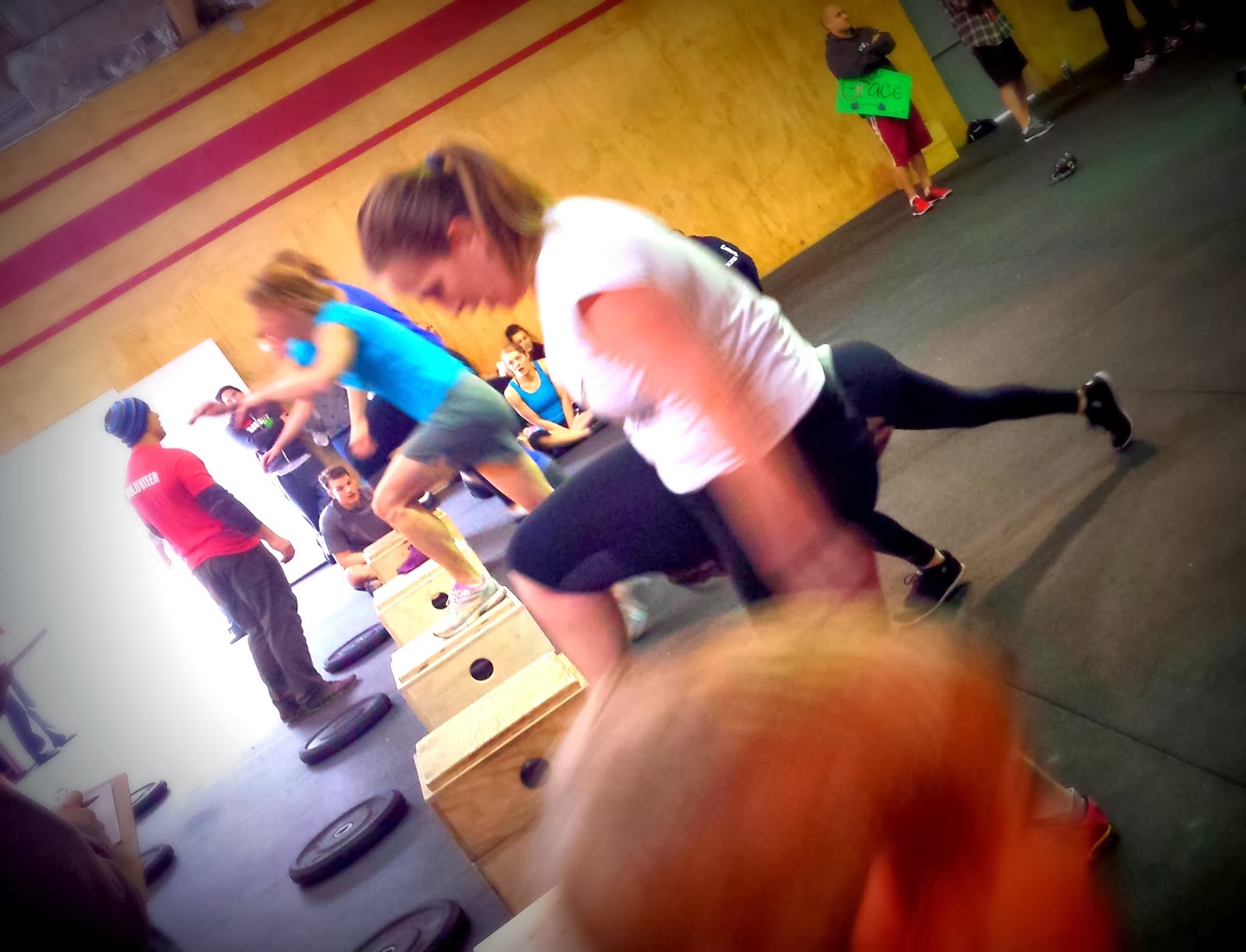 I don't have photos of the last bit. After I finished these, I grabbed that plate on the ground on the other side of the box and took off out those double doors wide open in the back before time was called.

I'm just proud I made it to the run. I'm completely satisfied. I mean, I could kick myself over stopping to breath for a few seconds here or there, but I did the best I could in the moment with what I had. As a side note - by this time, the cold (or exhaustion) was getting the better of me. By the time I got done with the lunges, all I could think of is that my throat was so dry and raw it felt as though it was going to start bleeding at any moment. Had my throat been cooperating, I'm sure I could have gotten a bit further, but it was what it was and I didn't shy away from anything, despite the lingering anxiety and the scratchy throat.

I placed 22nd/25 in this event, and I'm not really sorry. I do, however, wish I had a better coach/judge. She wasn't very encouraging and rarely sounded confident, which didn't help my flagging energy.

Sunshine was nice enough to dart out and get me a coffee and a protein shake between events. I'm so grateful for my support team. A fellow Navy wife buddy showed up to cheer me on, and the Lady in Grey was there for the first and second event as well. It was amazing to feel the love of friends when my family and My Sailor are so far away.  I've said it before and I'll say it again - find/create a support system. They are integral to success.

Finally - the last event rolled around.

Sumo Deadlifts getting ready to go - 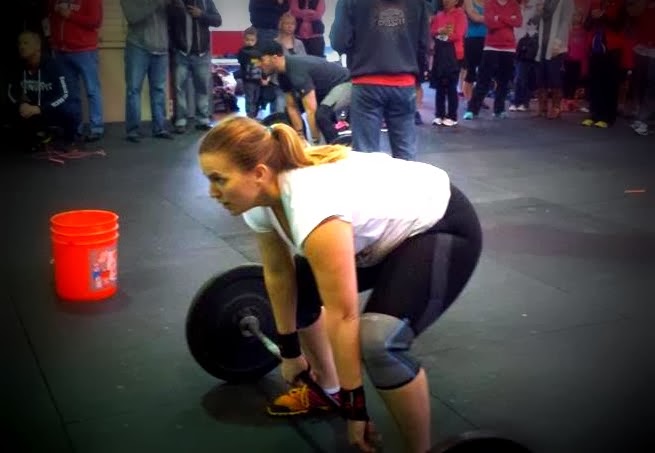 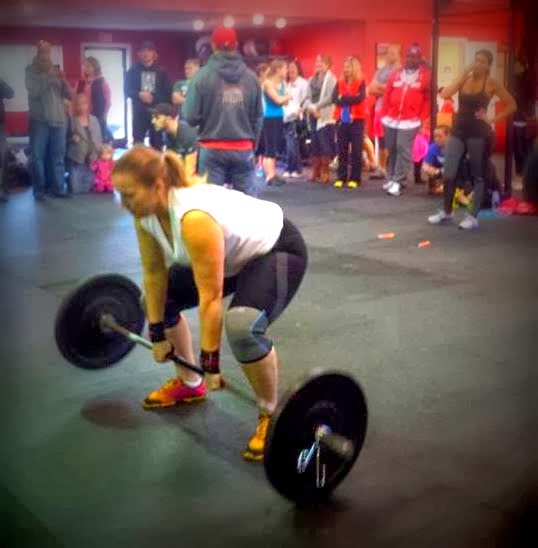 Thanks to my training with Trainer Guy, I could strategize this one for myself. I went from a Sumo Deadlift into a Clean to do the Push Press. 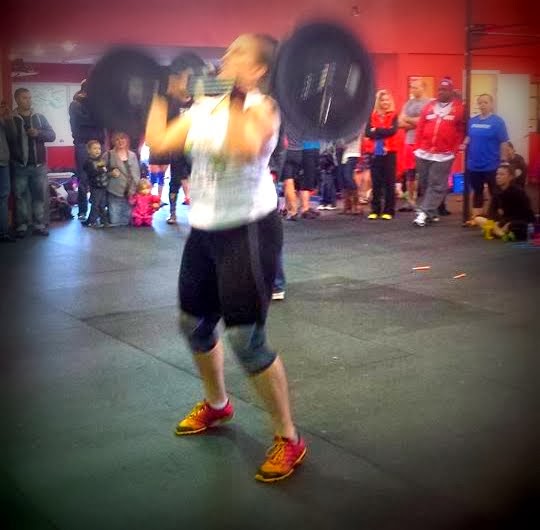 The hardest part of this event was the Front Squats. I had just maxed out my back squat 3 days prior, and I was still feeling it - on top of all the other events of the day... but the volunteer admiring it from behind leads me to believe that I still got it... that, and the fact that I made it through almost 4 rounds.
The Double Unders I just don't quite have yet, I can get a few, but I was really tired by this point and, well, tired people make mistakes. Lots of them. My judge on this one also was no real help. During the double unders, he got very distracted and kept looking away. In fact, in the video, you see me trying to get his attention...He didn't count any of those as double unders because he didn't see them. I see 2. It doesn't make a big difference in my overall score, so it really isn't worth lodging a complaint about.

It's a good lesson in competition. A lot of these things depend on the people who do are judging them.


Overall, it's was totally worth it. Two Crossfit Boxes are now interested in me going to them, so I have a couple of free workouts to try out and see who I like better.  Lifting is still my strongest suit, and I'm very happy with that. I didn't end up placing in the top three. I think I landed around 9th overall or so. I got a tiny taste of what it's like to be a Crossfit competitor... and I might just be a little bit hooked.

This is going to be a great year for trying new competitions and getting some street cred. I can tell.