Last Friday, Trainer Guy and I fine tuned some of my lifts, as we usually do in the gym. One of the challenges I have, is that I'm really flexible. Sometimes too flexible. These overhead squats were tougher than they needed to be, in part because my shoulders go pretty far back. Sometimes that makes it hard to find a 'sweet spot' and lock out the arms for those moves.

But more often than not, being flexible has been a 'pro' more than a 'con'. This month so far has been an amazing work out of that.

I'll spare you the run down of the absolutely crazy schedule that is ramping up around here (we'll just say, the green tea and coffee tend to flow in gross amounts around here lately). But despite all that, I've made some time to catch up with friends and family here and there, beyond the occasional text or Facebook message.

As our 1st annual Holiday Open House zooms up this Saturday, it's been really interesting to note some of my more cherished friendships aren't with people you might expect me to pal around with.

You see, when I was a kid - let's say elementary school aged - I had a very hard time making friends. Being a creative introvert who constantly felt like she was on the outside looking in at the 'party' was a hard thing to shake. I've learned that all experiences happen for a reason though. When I was a kid, a good chunk of my friends were adults. I'd rather have hung out with people 15- 20 years my senior most of the time. Especially when it came to women. Most of my friends in my age bracket through middle school and high school were boys. It probably has something due to the cruelty of kids and my constant search for answers and understanding that made it challenging to relate to girls my own age. But whatever the reason, I find that it's resulted in a wonderfully eclectic group of people in my life.  Many of which have children older than me. But I don't feel like their 'child'. More like their sister. 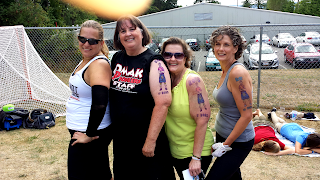 None of these ladies competed in my age bracket - but they were all 110% in my corner and cheered me on. They continue to keep me on my toes in the gym.
See The Lady In Grey at the far right? She can out box jump and out run me any day of the week and twice on Sundays.
See Sunshine there in yellow?  She's probably one of the best cheerleaders I've ever met, and inspires me by continuing to be the hero of her own story, despite the obstacles. If she can keep at it, what are my excuses?!

See the Equestrian Queen behind me in black? She nips at my heels (within 5lbs) of my bench press max. She's also adopted several kids in the same age bracket and sibling group idea that My Sailor and I have. We see a lot of each other in, well, each other.

Even if My Sailor wasn't able to make it that day, I'm sure they would have seen me (and each other) through to the end. Though I'm just begining to know each of their journeys, I count myself lucky to have fallen in with them.
I also have a fabulous set of friends that are all over the country. Many of them are within 10 years of my age bracket, now. Some are married with kids, some just have one or the other of peice of that equation. I've worked hard at those relationships as our lives go different directions, and meeting up whenever possible is always a lively time.

﻿
I could go on and on. If you're not specifically mentioned, please don't be offended. (It's probably just because I didn't have a digital photo of us handy.) I usually get along better with men, but friendships are like the tide. They tend to ebb and flow. We're all in different stages of life.

Honestly, I feel there is something to learn from just about everyone I've met. Even people we may find... abrasive.. but there are just certain people I hope rub off on me.

And I'm lucky enough to call them friends.
Posted by -J.D. Humenay at 3:21 PM