The Cure To Over Population 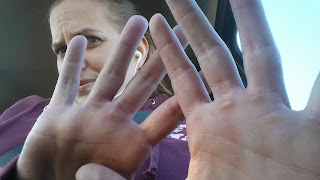 You Do Not Want To Hear This...
But I have the Cure to Over Population...

I am convinced that if every person who ever had a baby was required to go through the process to become a licensed Foster Parent prior entering parenthood,
there would be a lot less babies in the world. 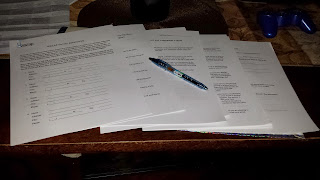 Seriously, if there were a way to require people to take these courses, there would be no unwanted children in the world, I'm convinced.

How many people would never put themselves at risk for pregnancy if they had to do a background check on the other biological donor part of that equation?

Now, I know my background. My Sailor knows my background. I know his background.
We're a set of the lucky ones.
Nothing they uncover will result in surprises, tension, or divorce because, well, there's nothing new to uncover.
But for SO many couples, I'm sure that's not the case.
Secrets are toxic.

Our example:
In his youth, My Sailor had a lead foot when it came to the gas pedal. He's never hit anything or anyone, but he's had his fair share a few speeding tickets.
At one point in his life, he was moving a lot and he got a speeding ticket. Having a lot on his plate, it got lost in the shuffle and he ended up having his license suspended. At that point, it wasn't a big deal because he was taking the bus.
Well, that got his attention and he paid the ticket. End of drama, right?

Both his job and the licensing board requires documentation of the speeding ticket issue. In fact, he has to write a letter talking about the circumstances ("I was speeding.") , what he's learned from it ("I shouldn't have sped and should have resolved the ticket immediately."), and how the experience will make him a better parent ("I'll teach my kids that if you obey the speed limit, you don't have to worry about getting tickets. If you do get a ticket it, take care of it immediately."). To add insult to injury, the courts in Michigan say it'll take 3-8 weeks to get the paper that says the issue was resolved... We only have 6 weeks where we know he'll be home every day. So once again, time isn't on our side, and we're at the mercy of hard working social workers and an interstate government system.

While I don't have any speeding tickets, I'm sure I'll be explaining my previous marriage to a social worker in detail eventually as well.

These are things we did over 10 years ago that have been put behind us, but still crop up.

I'm pretty convinced that, if these types of background checks were required for having kids - I doubt that many people would produce.

Because of this specific hiccup, we're in danger of not getting our homestudy and foster license done before his next deployment.
If it isn't done before his next deployment, this will be looking like a 3 year process. No, that's not for international adoption. That's for domestic.
While I have faith that everything happens just when it's ment to, and I know that being annoyed isn't going to change what has to happen in order to make this work.

But I think we could seriously cut future population in half (at least) if every parent were required to fill out the mountain of paperwork adoptive parents have to.

(This future adoptive parent rant is brought to you by coffee - and a huge stack of paperwork.)
﻿
Posted by -J.D. Humenay at 10:57 AM