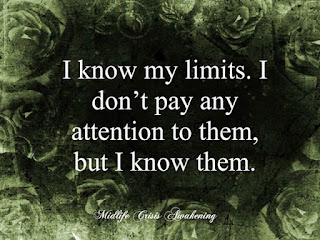 Despite a couple heated battles, I can say that today is a good day. Allow me to elaborate.

I woke up early (as often happens during these insanely long summer days in Washington) and got an early breakfast and got to work. I figured, since I had a few hours until my session with TrainerGuy, that it would be safe to eat breakfast, without reliving it during the work out.

I've since learned that was an unrealistic expectation, but it was good to get an early jump on the day.

TrainerGuy definately put me through my paces today, which is awesome. While I didn't meet any weight lifting milestones today, I did reach a running milestone - cranking out a 10 minute mile! Granted it was indoors on the track, but that's shaving a full 37 seconds off my best interval pace - and this was a FULL MILE.

I was not only surprised by the pace, but honestly, that I survived it without passing out. It's VERY rare that pain makes me pass out, but I was starting to worry when my Endo decided to act up about 600 meters into the run. It stuck with me that entire lap, and for the first time I actually admitted that it was painful and holding me back.

I was first "officially" dx'd with Endometriosis (Challenger #1) when I had an ovary removed that was more disease than organ. Here is a quick throw back for those that missed that episode several years ago - a crash course in Endo as it relates to me.
See a few added lines and stretchy bits on this diagram of female anatomy? This is an example of Stage 4 Endometriosis - the little monster that lives in my belly. See all those extra lines of tissue? That's scar tissue. See all those little dark lines? Those are Endometrial Lesions. Ideally, Endometrial cells grow INSIDE the uterus, facilitating all that baby making magic. For about 5.5 million women in North America, these lesions decide that they need to grow elsewhere. (See? I have LOTS of company.) They cause pain, depression, hormonal imbalance, etc. There are several different stages, based on the number of lesions, locations, etc.  Stage 4 is the highest and, yup, that's me sports fans! There is no "cure" - just treatments for the pain it causes at this point. You can have it surgically removed, but it usually just grows back.

Okay, so if this diagram where accurate to me, the right ovary would be completely gone (replaced by scar tissue). It was already removed when it was taken over my right ovary, completely encasing it (and all of it's other cysts) in one huge growth. When the doc went in there to try and save Righty the Ovary, he found a BUNCH of adhesions and scar tissue. Yeah, my doctor found scar tissue BEFORE I'd ever been cut into. Creepy, huh?

So, what does this "stage 4" thing mean? In a nice little nutshell, it means that my gastric parts are glued to my girly parts via some Endometrial tissue that crashed the 'normal body' party. Here's the upside, usually, severe cases like mine are beyond being painful every day. It really only acts up a few times a month, and it's nothing a small handful of inflammatories can't help me handle. Since all of this has been "normal" to be since puberty, I have a really high tolerance for pain- a fact that has served me well in life.

ANYWAY, my case was already pretty well advanced; advanced enough that taking it out would probably do more harm than good. Add in my already-existant scarring disorder (keliods), and there really was no point in scraping my insides any more than the surgeon absolutely had to. He didn't bother attempting to remove it. He just evicted Righty. I recovered from the surgery well, now years later. When I first was diagnosed with a chronic, incurable illness at the ripe old age of 19, I vowed to never let these things I can't control hold me back.

A disease is just a label - not a definition of who I am or what I'm capable of.

Today, I proved that again.

Soon enough the pain subsided and I was back at it.

Although - let's just say, I saved the YMCA staff a good bit of  clean-up with saw-dust by keeping my mouth shut when I crossed the final finish line, swallowing quickly, and swigging some water as I finished the second 800 meters 2 seconds faster than the first. They wouldn't have appreciated reliving my breakfast.

So I won the day. I can still say I've never passed out, been injured, or throw up (visibly) during one of TrainerGuy's tough work outs. I'm pretty proud of that fact.

I was really excited about my milestone by the time I got to the car.  That's when Challenger #2 stepped into the ring.

Grabbing my phone and booting it up, I was ready to share my excitement, but with who? My brother wouldn't be impressed (of course - he's my big brother). My mom was on a plane or working. My best friends either have kiddoes or are fighting their own battles-of-the-bulge and find my workout-sharing a bit overzealous. My Sailor had the day off and was at home getting some much needed sleep...

Normally, I could always count on calling Dad and hearing the excitment for me in his voice when I reached a new high...

But I can't call Dad. This time, the conversation with him in my head was coming harder. I struggled to remember his excited voice. As elated as I was about the achievement- at the same time, I was heartbroken, frustrated, and deeply annoyed that I couldn't hear Dad saying, "Way to go Kiddoe! That's really great! You're doing a great job!"

I miss the big guy.  And with Father's Day nearing - it's especially raw right now.

I guess I always will.

But here's where the win came in again...
My Sailor finally had the day off. I found him snoozing on the couch as I came in, both excited and with eyes brimming with tears at the same time. I weakly explained that I needed a hug, and why ("I ran a 10 minute mile and I can't share that with Dad." ).

That may not sound like a win, but you might be missing the bigger picture. Sure, I was in pain and that sucked, but He Was Home. I was able to recover after a few long hugs and some quiet sobbs.

Then - the ultimate win -

A change of scenery.

We took drive into beautiful Gig Habor and caught a movie (Epic in 3D) and a meal at one of our favorite spots - The Green House. Great wine, excellent seafood and great company.

Overall, I'd say I won this round.

To my challengers, they brought it today and brought it hard. I'm still not sure if the nausea was really  related to my breakfast or my Endo, but either way, none of them won the day today.

I'll curl up in bed tonight, knowing that Dad was a part of sharing my excitement in the way he can be, My Sailor is safely tucked in beside me, and I did my best today.