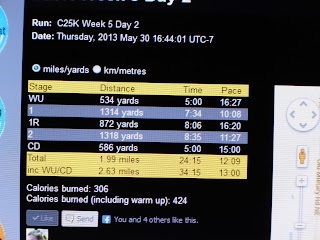 Yesterday I had a great run. I ran the longest I have run in this C25K training session as well.
I ran in sweats, with music playing. It was raining off and on and I just focused on some spot in the distance and kept at it.
The result?
My longest run was at about 11 minutes/mile (it was on a slow yet steady uphill slope) and a near 10 minute interval.

Looks like 2 days of rest is pretty much my magic medication for a great run result.

I noticed some changes - though not yet on the scale. The changes came in the form of getting into an airplane seat and my hips didn't creep under the arm rest (yes, they used to). It's a pretty safe bet that it means about a 1/2 inch to 1 inch off my hips/thighs rather than assuming Virgin American got bigger seats since April.

Now, one thing that's stuck with me for as long as I remember is that I'm often unreasonably hard on myself. The upside is that it motivates me to be better - to be more than I am now. The down side, is that I can get deeply discouraged. In fact, if there is one thing my oldest friends would change about me, it's that I am really hard on myself.

I've learned to remind myself to be gentle on my emotions/spirit when I'm feeling discouraged or overwhelmed. In this Navy life, it's a constant adaptation process, so that "Be gentle on yourself," feedback loop in my mind gets a good work out. A great example: My Sailor came back from an underway with a bum knee, a bad cold, his hockey team lost their shot at the Stanley Cup this year, and he got 4 hours of sleep before going back to work for a 12 hour shift, with no days off for another week, and he barely missed his last promotion oppurtunity. Talk about your rolling with the punches.

When it comes to my physical progress though, I find taking photos like this are vital to kicking my discouragement in the butt. Well, that and moving heavy things around in the gym.

Physically moving helps me deal with the constant adaptations necessary to thrive in this life. Achieving on those levels is my favorite bi-product. I couldn't imagine dealing with the stress any other way. It's a real gift to be able to move.  I'm pretty much sold on this and plan to stick to it for a year. My Sailor says a year and a 1/2, but we'll see how things go (financially and otherwise). 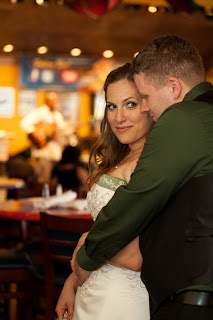 For what it's worth, this is one girl, who is unreasonably hard on herself, who is happy with how far she's come...