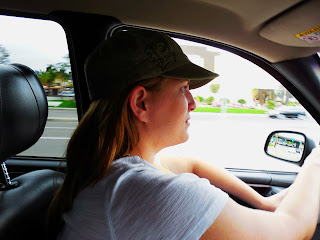 Before I left California in April, and after my dad had taken his last breath, My Sailor and I drove to San Diego to see the cemetery in Rosecrans in Point Loma where my dad's ashes were to be interred.

I held it together during most of the drive. As you can see from the left, I was driving. I know my way around San Deigo far better than My Sailor (who, until then, had only been there twice for brief visits).

Now, normally I would describe cemeteries, no matter how pretty, still wreck of rotting flesh and bones, and have an overall aura of devastation. Finding myself purposely driving to one seems like one of the last things I'd do. But there I was, in April driving to a cemetery, and here I will be again tomorrow morning, driving to a cemetery.

In general, I believe funerals aren't for the dead - but for the living. They help with closure and with grief (or so I'm told). I've never actually been to one, in my 33 years of life. I've managed to either avoid such occasions, or not have need of them. So it's a little extra challenging that tomorrow I should leave to do the internment ceremony of my dad's ashes into the military graveyard.

I think Dad probably would have rolled his eyes at all this, but my brother has a point as well. Having a stone here is something we can bring future generations to that says, "Hey, we were here."

I can see why people do these kinds of things - funerals and memorials - quickly after someone dies. While they are important for the grieving process, each ceremony is like someone cleaning out a wound in danger of festering. Each time, it's cleansing and healing - but it also hurts like hell.

And after tomorrow, there will be one more later in this summer.

Exploring this uncharted territory without My Sailor allows me to be uniquely selfish in my experience, without worrying about anyone elses' day to day.