Wedding Week Recap - The Shopping and the Drive

I wish I had something more interesting to tell you about Thursday, August 9th, and our drive up to Disneyland from my hometown of Escondido, California.

It started at about 9:30am. We packed our bags, confirmed the all important dress delivery with my mom (who had been the keeper of the gown since it was purchased over a year earlier). Then we headed off to the mall on our way up to Anaheim for some... er... 'last minute shopping'.

Basically, My Sailor needed a suit to wear to the wedding. Opting not to pay over $100 for a rented tuxedo, he decided he'd rather invest in his own wardrobe, and why not? I mean, who isn't more comfortable sweating it up as they party in their own clothes than a rented suit that's been worn by 100 other men? Besides, I invested in a wedding gown. I felt he deserved to choose his wardrobe. Lucky for me, he has a pretty great fashion sense. 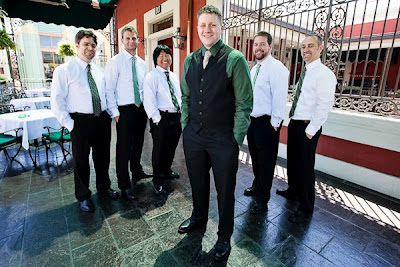 After stopping at about 3 stores, we finally settled on a suit at JC Penny, and 2 shirts from Express. JC Penny was having a sale (yeah!) and Express offered the following discounts - 10% off for signing up for their email mailing list (done), 10% off for signing up for their text alerts (done), buy one get on 50% off on shirts, AND a 15% off Military Discount. All told, we ended up getting a 3 piece suit, 2 dress shirts, and his tie for about $250. And he can wear it again. Score! 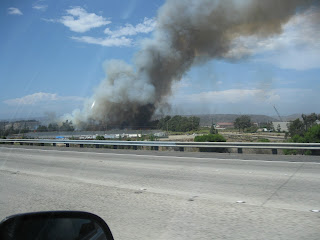 Excited from our great deals, we headed up to Anaheim on a Thursday afternoon. The great thing about heading up mid day on a weekday is that traffic was at a minimum. Today the down side was that it was during a hot, dry summer in Southern California. In fact, it had been unusually warm, even for what was historically the hottest month of the year in Anaheim. On our way up, we passed a wild fire. Man, I don't miss those now that we live in Washington near the water.

We arrived just in time to meet My Sailor's sister and her family. It was really great to get some "one on one" time with family - not to mention we met at the Rainforest Cafe! My Sailor and I have a loyalty membership to the Landry's locations, so, not only did we have a great time with family/bridal party (his sister was a bridesmaid, her daughter was our flower girl, and her husband was a groomsman), but we also ended up earning enough points for a $25 gift certificate! (This came into play later during my Flying Solo night to be detailed on the August 10th post.) It was a great time.

Afterwards, we checked into the Disneyland Hotel. We stayed at the Adventure Tower and enjoyed a King sized bedroom (a splurge for us - we're usually queen bed folks). It was really great to walk in hearing music from Adventureland attractions and even Dinosaur! (I LOVED that movie!)

Thursday night was ours. We had intended to go into the parks, but instead, we ended up doing errands. We walked back to the Esplanade after confirming the number of military tickets we'd need to buy and headed over there to do just that and finish off family errands. After buying the tickets, we met up with my Jr. Bridesmaid and her dad (my 1/2 sister and bio dad) for a drink, some appetizers, and some ice cream. It turned into a fun way to spend the evening.

We finally headed back to our room around 10pm to crash. It was a long evening, but the bed was comfortable and we knew we had an early morning ahead of us. Disneyland was calling!