My dad gets to take a BREAK from Chemo! That's pretty awesome. We're at the 7 month mark since his diagnosis now, 6 months of chemo and he's doing really really well, which gives us all hope that he'll be around to meet the grandkids at some point. (No, we're NOT pregnant- so don't think that was a "hint" and start emailing me a thousand questions.)  We're not out of the woods, but anyone who has ever dealt with this particular plague on our world (Cancer) knows that you fight your battles one at a time, and you celebrate every small victory that comes your way. Taking a break from Chemo before we figure out the next step is a big victory, so we're going to run with it.

He's looking forward to some travel to the East Coast to visit family, now that chemo isn't attacking his immune system - making air ports and air planes a much safer endevour. His positive attitude has seen him through a lot.

This brings to light a bigger idea for me.

It's once again made clear to me that EVERYTHING in my life has happened for a reason. You all know my adoption story by now. But let's go one step deeper. Look at my mom and dad. I'm sure when they met 40 some years ago, they never realized that Mom being a Nurse would be such a help to Dad during this time. No one anticipates cancer which makes "preparing for it" impossible. But honestly, they couldn't have been better equiped. Between their years of friendship, and all the challenges they've already been through, no one could have been better prepared for it to strike.

So, in honor of all that good news - find something to celebrate today, dear readers. 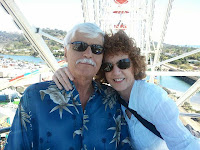