A Big Girl Blog And Breaking the Curse 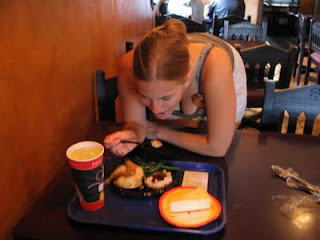 In 19 days, I'll be meeting Sistah' Girl in MCO (Orlando International Airport, for those of you who aren't travel savy). We've been planning and dreaming of this trip so long, it felt like it was never going to happen, and here it is, knocking (dare I say, pounding) at the door.

Don't get me wrong. It's not that I'm not looking forward to it. In fact, quite the opposite! But I don't think it's really going to sink in that "we're going" until I get on that plane marking the last leg to Orlando. (Then, no doubt, it will continue to sink in for the first couple days!)

Now, Sistah' Girl and I have always been "big girls". And to some extent, we've each taken pride in the 'privledges' that allows. Being a bigger girl, you feel less attractive to men so it's far easier to become 'one of the guys'. In fact, most of my friends growing up have been male. I've been blessed to have some fabulous guy friends in my life. People also expect you to be down for whatever when it comes to food. They seem to inately realize that you're not going to go to a diner and find nothing to eat.

It took a couple years of marriage (and a game of racketball) for my ex husband to realize, "You're a big girl, but you don't let it slow you down."

Nothing could be more true. I could pack it away and throw down! I know that's something Sistah' Girl and I have always had in common (even though I think she's always been a bit more girly than me).

Well, now a lot of that has changed.

Don't get me wrong! I can still throw down like nobody's business! Anyone who has done the theme park commando thing knows this first hand!

However...
I can't pack it away anymore. It's actually uncomfortable. I no longer feel pride in grabbing the last bite of something, or cleaning my own plate.

So this Disneyworld trip will be very different for us.
*We're both well under 200lbs now.
*It's our first official Roasted Bear Tour.
*We'll be thinner than we've ever seen one another.
*We'll be staying off property (new for me)
*We'll be breaking the Disneyworld Curse.
(For those not in-the-know, this is the Disneyworld Curse: Between 1999 and 2005, I've been to Disneyworld with 5 people - each of whom I considered the closest people in the world to me and whom I assumed I'd be forever friends with at the very least. Well, due to choices made by them or me, none of them are a part of my life anymore. While I will always cherish those memories made with those people, and I don't regret a moment of what we shared, things change, and sometimes we have to let those we love go. However, it's a streak I'd rather not continue if I have any say about it. So Sistah' Girl and I think we have pretty good odds at breaking that curse. Afterall, we've put up with each other for over 15 years as it is! )
*We'll be celebrating an up-coming year of new dreams to dream and world's to rock. ;)
Posted by -J.D. Humenay at 1:27 PM