It's been a few years since someone snatched my domain up when it expired and I'm glad to have it back and get back to blogging.

This Christmas I had the chance to do something amazing. Truely a bucket list item.

About 10 years I had set the goal that, if I can get down to that magic number on the scale and keep it there for a year, I would book a Disney Cruise. The Disney Cruise Line had just become a thing and, being the Disney fan that I am, I thought for sure it would be incentive enough to nail down my diet and fitness for life.

Well, over a decade, bodies change. Mine has. It's gotten smaller and bigger and currently sits somewhere in between. It's had a kid and qualified for National acclaim in Weightlifting. It went from sitting behind a desk coding medical charts to living in the gym training people to get stronger, more mobile, and meet their goals.

Needless to say, it's been a wild ride.

Regardless of the scale, when all the stars aligned, we jumped on this once in a lifetime oppurtunity.

A Disney Cruise over Christmas!

It was a whirlwind of a week, but one that I'll never regret taking advantage of.

It brought back a flood of my childhood that I never expected. More on that later on.

The trip itself was a huge whirlwind. We booked it about 3 weeks before the boat left. Since these types of trips are usually booked a year or more in advance, it was very last minute. Beanie Girl and My Sailor were able to get passports in time. I was allowed to cruise using my birth certificate and photo ID. We booked a Verandah room on a 7-Night Carribbean cruise (thanks to a steep Military Discount) and I'm so glad we did (though I'm sure and inside room would be fine for shorter cruises). We ended up spending a lot of hours on that balcony.

This was the longest I'd be away from work since 2013 and that's a big deal when you're self employed. So I was nervous to say the least. I worked every single day leading up to the cruise from the day we booked it, while trying to coordinate getting passports, packing, obtaining last minute things (like formal gowns and "normal people" clothes, since I pretty much live in gym clothes and jeans here in the Pacific Northwest. Not exactly suitable for 85 degree weather.

But all the hassle was well worth it.


When we arrived in Houston, we ordered an Uber and took the hour plus drive around 1230am to our hotel in Galveston. The ride was hair-raising. 'Rosario' was supposed to drive us, but instead her dad did - apparently the split shifts since Rosario has a young child at home. Okay... About 45 minutes in, it was obvious our kind driver was trying to stay awake, drifting between lanes, etc. I was getting pretty nervous so I started as many conversations as I could think of with him just to keep  him awake. This was NOT how I wanted to die. Luckily, there was pretty much no traffic at that time of morning.  We made it and checked into the the Harbor House on Peir 21. It was about 5 blocks walk to the port from there, so it would be an easy morning.
We got settled in the room by 2am and had to be checked out by noon the next day. So we made the MOST of that room, laying around in bed until the last minute. (I visited the breakfast room a few times to bring juices and food back for the clan.) 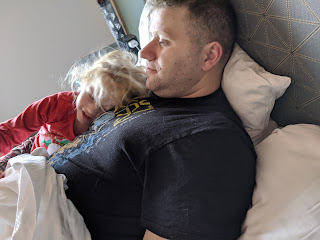 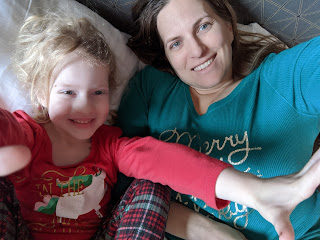 We were finally READY TO GO for day 1 of our cruise! To be continued.