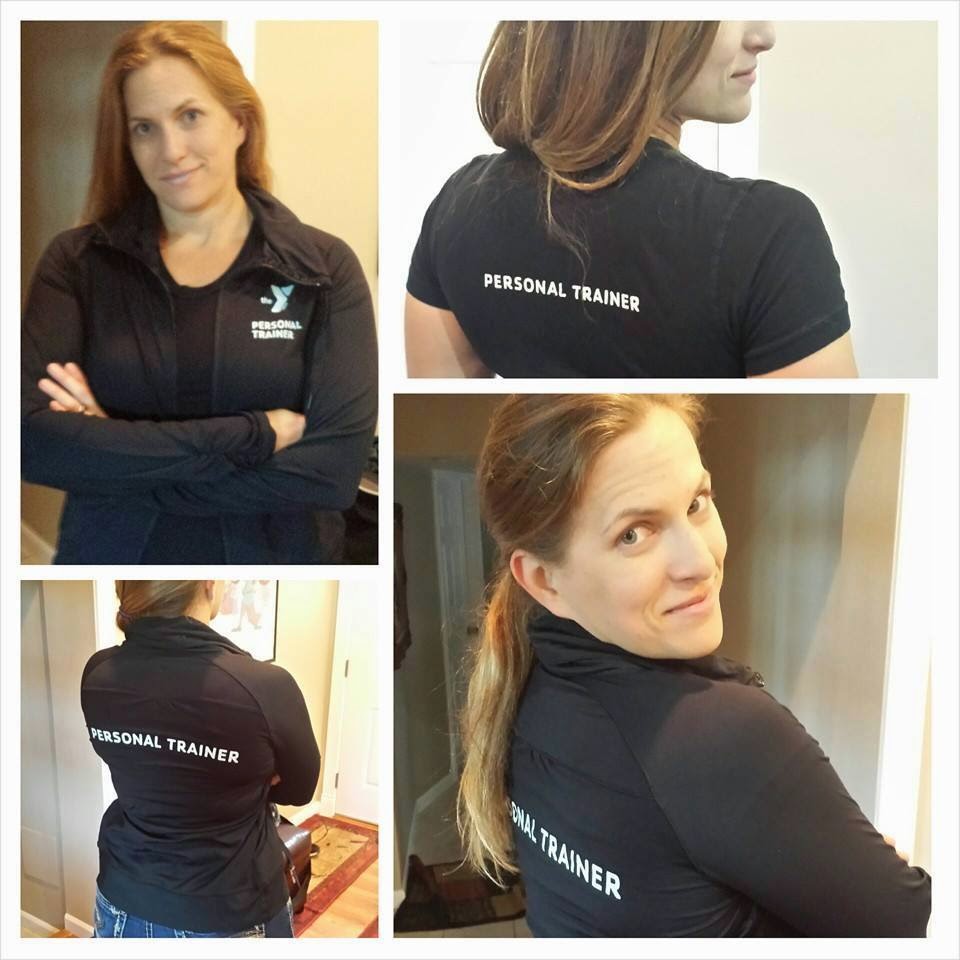 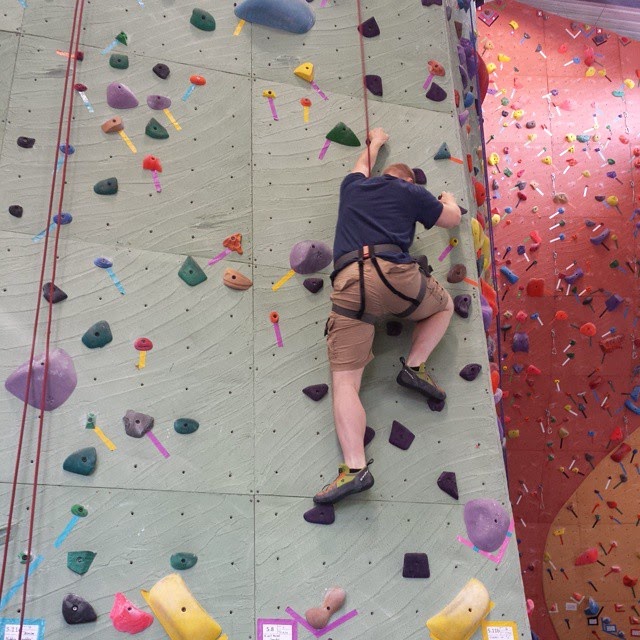 Oh you poor neglected blog! Life has been hectic lately, and I'm doing my best to make my "down time" with My Sailor be non-screen oriented, so blogging as fallen through the cracks of late. Since I've been gone, My Sailor turned 31 - which we celebrated by going indoor rock climbing and later with some drinks at a brewery with friends. 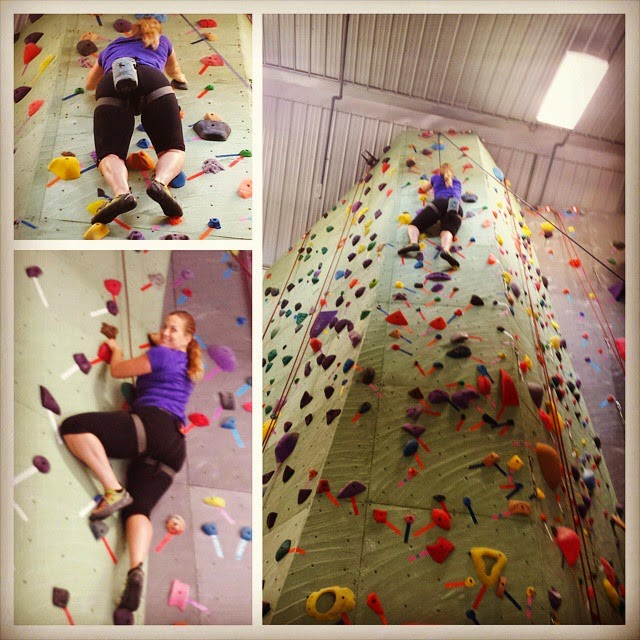 Round about the time that happened - This happened too - 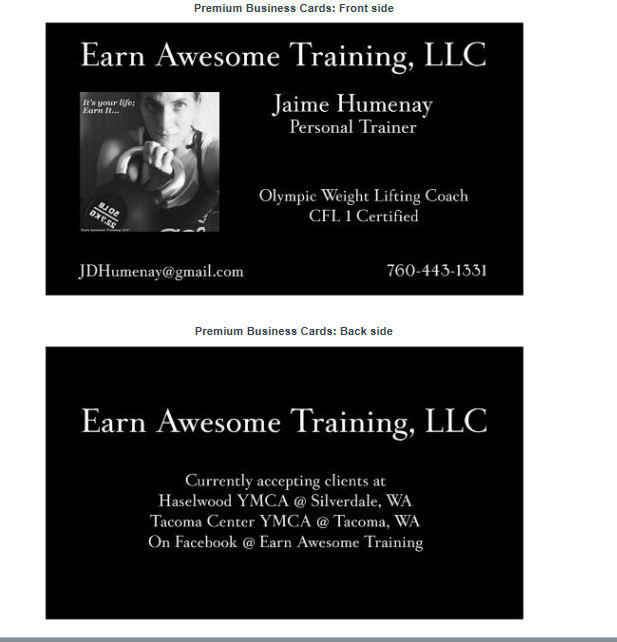 So I'm officially busting down doors and breaking into the Coaching world.

And I love it.

It's cooling down up here and Fall is right around the corner. I'm so ready for the cooler weather, the leaves changing, and the quiet buzz of excitement that seems to resonate in the Fall. (I love living in a place with actual, ya know, seasons!) I love curling up under blankets and trading my tank tops and shorts for jeans and sweaters. Yes - even though I'm smaller this fall than I've ever been. I can't say I'm lighter; I am just more...compact.

Which brings me to a neat revelation I had today.

This week, I was reading a fitness blog/article and the photo attached had a picture of this woman doing a Snatch (heavy bar overhead, arms and shoulders looked out in a wide grip). I only saw from the shoulder blades up but she had these fantastic shoulders. The definition over her shoulder blades was visable as the flesh had been left bare by her raceback tank top. For some reason, it really struck me. She wasn't "bulky". She wasn't a bikini model training for a specific look. She was just defined. I haven't been able to find the picture since, but I had a "Wow!" moment.

Which brings me to the revelation - today in the gym, Trainer Guy sicked me on some pull ups. Now, I still don't have an unassisted pull up. I STILL weigh about 195lbs, so an unassisted pull up requires a lot of upper body strength - and, well, I'm a woman (yes, I just used that excuse).  Upper body strength is harder to come by. That said,  I'm finding that I should probably be using my 60lb assistance bands in the future to make them a bit harder. I can do 10 unbroken (most of the time, though I still have to work at it) with my 90lb assistance bands.

Um... wait a second... let's do some math here. That means I'm able to PULL UP over 100 pounds MORE THAN ONCE! What craziness is this?!

Those shoulders that girl had? I realized on my drive home from the gym today that I've likely joined her club.

While before my body image issues had to do with feeling fat, flabby, and generally of the rounder persuasion, lately I feel the reality of long, lanky, strong arms clicking into place. I worry less about my fluff and focus on what I can do now that I couldn't do before. And it seems to have happened in the blink of an eye.  I remember when the bar was heavy. I remember when a Snatch felt frustratingly unattainable. Yes, I remember WILLINGLY taking weekends off of lifting because "It still needs to be fun".  Whatever happened in between is starting to blur together and, instead of throwing in the towel, I toweled off the sweat....

And now, I'm reaching my goals - bit by bit. In March, I got 105lb over my head in a Split Jerk from the rack for the first time ever. Now, I've done 125lbs in a full clean and jerk in the same WEEK MORE than once...

And, remember that 100lb snatch I was reaching for by the end of summer?


Okay - here's why this video is funny (aside from my angry-lifter face - which, yes, is hysterical.)
If you've read my blog for any amount of time, or known me at all, I have a habit of talking to myself - especially when faced with a challenge. It's as if the work it takes to say things out loud and listen to them so exhausts my brain that doubt suddenly has no room. So here's a transcript of what you hear in the video (Keep in mind that I'm surrounded on either side of the camera by a basketball team of young men who have been watching me train in my Trainer Girl gear and are already interested in Olympic Lifting, so, yes, I had a bit of an audience.)
100lb Snatch - the Audio drama (Transcribed):
"Same weight, Jay." (Lie - the last weight I lifted was 95 lbs)
"It's just the same." (Lie - No, it's really 100 lbs...)
"Same weight." (Sure... it's the same weight as it was when I loaded it... at 100lbs...)
"OH YES! Wahoo! Over 1/2 my body weight." (True.)

And that was a good day.