I'm laying in bed (with the lap top - bad idea, I know...) and I'm laying out my schedule for next week... and seriously considering joining a local indoor women's mid-level soccer league that plays on Tuesday nights...

Then I realized that one day last week, I slept for 12 hours straight, ruining my entire day's plans and throwing off this weekend's schedule as well.

So that got me thinking, "What about balance, J?"

It's probably the hardest thing to achieve in life in general.

When it falls into place, life rolls along at a seemingly effortless pace. Even the heaviest of obstacles seem to fall into place right where they are supposed to.

But when that balance doesn't work, you can spend all day trying to stand on your head to make things work - and feeling like you've just been chasing your tail.

So when our soccer team lost (again) tonight, I was frustrated and picked up a schedule to look for another league to play in. I found a woman's intermediate level soccer team that plays on Tuesday nights. It's $60 for the session, so that would mean I'd spent $120 between the 2 leagues for 12 games of Soccer total.
Add that to my other health related activities (YMCA membership, training fees, and the occasional drop in classes) and that's basically eating up about 90% of my 'play money'.

The crazy thing is, that 'should' probably upset me.

The even crazier thing is - it doesn't.

In fact, the only reason I'm not going for it and signing up for the soccer team is that I don't want to overdue it and end up injuring myself... and I may show up for Olympic Lifting Saturday mornings for a while... Get Up Get Dirty Sunday mornings....

The new League would be on Tuesday nights. My options for "Rest" days are currently Tuesdays and Thursdays - of which I usually only end up sticking to one a week. As they say, "Muscles are ripped in the gym, fueled in the kitchen, and built in bed." Rest is an important part of any fitness equation.

That said, the highlight of this weekend has to be discovering this little beauty on Facebook today. I was no where near finishing in 8 minutes, but I was a solid contender for 2nd! That's much better than I expected when I saw 40 Wall Ball Shots with 14lbs on the list of things to do. At least it was all downhill from there. That's Trainer Guy right above me rocking out the LOWEST time on the board. (At least I know I'm being trained by the right person!) 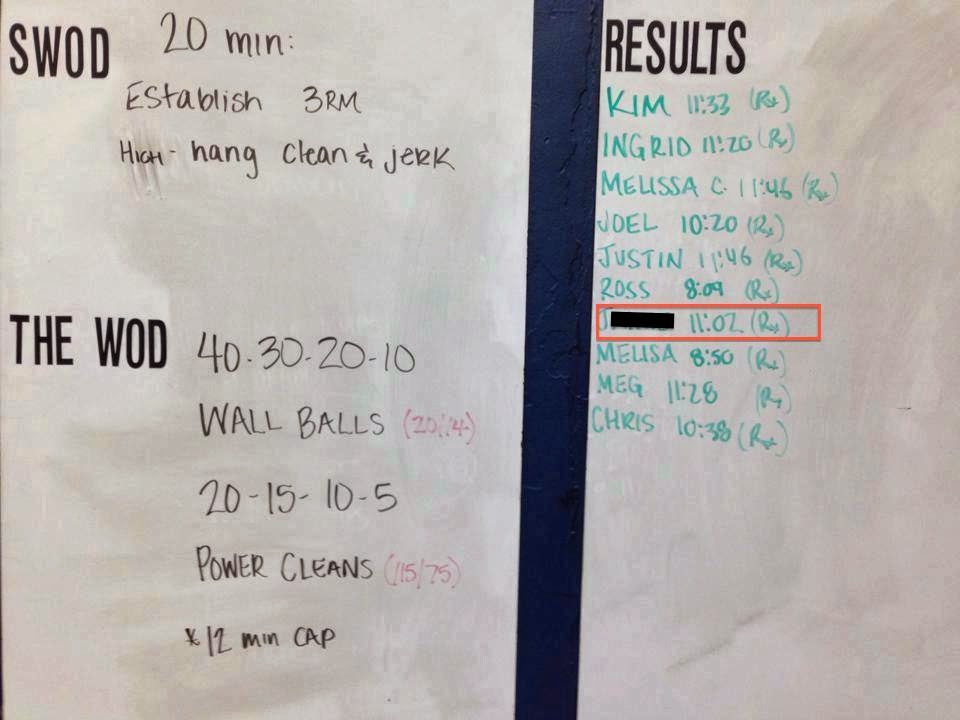 Dropping in on games is the same price as dropping in on these classes, so maybe I'll treat it on a 'week by week' basis.

I did meet my friend The Wall this week...when I overslept, pretty much ruining 1/2 a day right there. 12 hours in 1 day and I still felt like I could sleep longer.

Now, before ya'll start jumping to 'depression', my spirits are pretty good. I won't say "stellar" because, well, we all know a lot of life hasn't panned out the way I was expecting/hoping it would recently. But I'd say I'm far from the black pit of despair. I'm taking care of myself, my dogs, and meeting my responsibilities. I'm finding time for things that enrich me as a person and am exposing myself to spaces where I think I might just find some inspiration. (For example, watching a few heats of the Crossfit Open was amazing on Friday night and DID inspire me to stay the course when I was starting to wonder if I was burning out a bit.) I'm still writing, adding a weekly blog entry to the mix over at Celebrations Press (starting tomorrow! Yeah!) and I'm actually getting more focused and productive at work. My overactive imagination may have taken a bit of a break at the moment, as writing comes hard right now, but it's still in there, kicking around and keeping me company.

I think finding a balance is something natural we all struggle with. The added 'struggle' for military folks is that, just when you find your stride, something happens (deployment, schedule changes, etc) to throw it for a loop completely. Never knowing where My Sailor is or what he's up to makes it easy for me to get jealous of those in surface fleet life, but it's a short lived jealousy. They are dealing with a whole different set of complications than those of dealing with Sub life have. They may have Skype and phone calls, but they also have MUCH longer separations.  Each journey is unique and deserves its own kind of respect.

Anyway, I just made my first book to keep track of work outs, lifts, and things of that nature this year. It's pretty awesome and I'm looking forward to showing it off in the gym tomorrow.

Hopefully Thursday I will have some news about the possible additions to the house as well. Fingers and toes crossed!
Posted by -J.D. Humenay at 11:09 PM