The Ayes (Eyes) Have It! My First Submarine Ball! 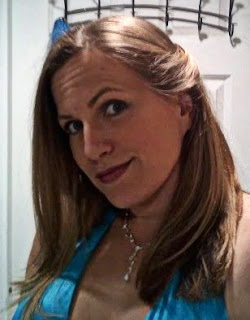 Yesterday was the Enlisted Submariner's Ball. It's a formal occasion the Navy puts on every year - one of the officers, and one for the enlisted sailors. My Sailor and I didn't go last year, but I heard it was a lot of fun (and I'm always looking for a valid excuse to dress up and go out), so he promised we'd go this year.

Now, in lots of ways, I'm still a 'typical girl' about a lot of things. My dress wasn't 'new'. It was one of the five formal gowns I have in my closet. Having been a performer in my past, you can say I have more than a few - however none of them fit my new body-in-progress right now except for this particular dress, so it really wasn't as if I had a choice. Lacking both the time and the wiggle room in the budget this month, I went with something I already owned. I also skipped on doing my nails (no time), and I did my hair myself. My make up I also did myself as well, which was a good thing because it required some old stage tricks... but I'll get to that. I clean up pretty well when I put my mind to it. (Most days it's just t-shirts and jeans around here.)

Anyway, after working a pretty full day, I dashed off to get changed and make it to the ferry.

That's sort of where the calamity started. We missed the Ferry. Now, just because the map SAYS we're about 10-13 miles away from Seattle, doesn't mean it's drive-able in less than an hour. In fact, it's nearly 2 to get to downtown Seattle. So that put us almost 2 hours into the party getting there (1 hour was cocktail hour, so that really shouldn't count though).

Now, this Sub Ball quite possibly had the worst timing. Though it's always fun to go get dressed up (and extra special for me to get a peek into My Sailor's world and let him know how proud I am of him), we were kinda stressed out. My Sailor made it very clear that he didn't want to wear his dress blues (a requirement) and he didn't want to be there.

So... we basically dined and dashed. In hindsight, we spent more time commuting to and from the festivities than actually AT them...

BUT before the dashing, I got to see a pretty cool thing.

It's a tradition that the earliest qualified Submariner in attendance cut the Navy's Birthday cake. In this case, they had narrowed it down to one active duty Submariner that was qualified in the early 1980s. 1986 actually. It got me thinking, "Wow... that guy has been silently protecting me since I was 6 years old, and I had no idea." Then again, that is the world of the Submariner. They are some of the silent watch dogs out there, keeping us safe, so we can complain, blog, see the latest movie, or vote (or not vote) for the latest government leader... If we had stayed later, I would have liked to have tracked him down and thanked him.

But that Submariner was quickly trumped by a Veteran, who was qualified during World War II! That's pretty rare now a days, since that was when Submarines really became a strong military force.

Though I would have loved to have stayed longer, tasted the cake, watched more ceremonies, and stolen a slow dance with my man in uniform, My Sailor couldn't wait to leave. Now, this whole ball was the fulfillment of a promise he made to me a year ago. We didn't go to the Submariner's Ball last year because he'd heard it was boring. Well, I heard it was fun and any excuse to get all dolled up and have fun is good enough for me! (Not to mention, it's the ONLY way I'll ever have a photo of My Sailor in his uniform with me - he won't wear them unless he's at work, which I understand and can appreciate.) So he made sure we had tickets and could go this year.

He's promised we'll go some other year too - just not next year.

As disappointed as I was to leave so quickly, it might just have been a good thing.

See, last Fall I developed some weird allergy around the skin of my eyes and on my lips. The doctors think it's pollen related - but the symptoms are abnormal. My lips peel as if chapped, and my eyes swell, get red, and peel as well. Not itch. Just swell up and peel.

With the help of some of my special effects stage make up, I managed to hide the peeling bits under my eyes, as well as the redness around them. But on the drive home, my right eye started to swell. And then it started to water... 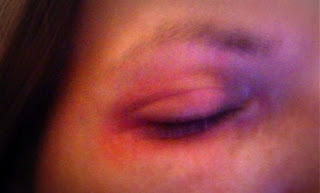 By the time I got home, it had nearly completely swelled shut, and was starting to alarm My Sailor.

Lots of Benadryl later, it stopped watering (for the most part) and I can nearly comfortably blink both my eyes.

If there is one thing that can be said for me when I pass, it's that I don't do ANYTHING small. Not even allergies.